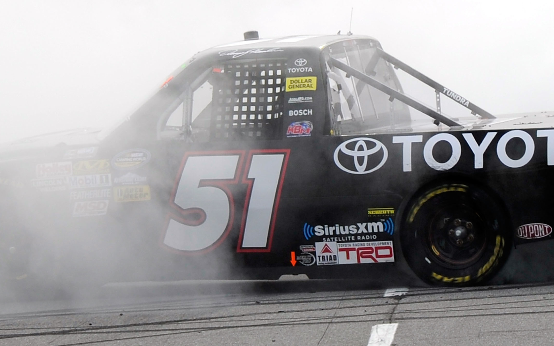 Hamlin, who is in the thick of the NASCAR Sprint Cup championship battle, qualified fifth for the race, but had to go to the rear of the field for the start of the race, a penalty for missing the drivers meeting.

Hamlin missed the truck series’ drivers meeting because it conflicted with the final Sprint Cup practice of the day, and he said he couldn’t afford to give up any track time in his Cup car. Hamlin is third in the Sprint Cup points headed into the TUMS Fast Relief 500 Sunday, 20 points out of the lead.

He started 36th and methodically worked his way toward the front. He took the lead on lap 195, getting a bumper under Crafton, and then shoving him high up the race track.

“I love this place. Man, this was short-track racing at its finest,” said Hamlin, a native of Virginia who began racing at Martinsville Speedway when he was a teenager in the Virginia is for Racing Lovers 300 late model stock event. “It was a great day for us. We took our time getting to the front.”

“He was telling me how excited he was about finishing fourth,” Hamlin said about the post-race exchange with Crafton. “When you are the leader with a few laps to go at Martinsville, you gotta expect that. It’s sort of standard protocol here at Martinsville.”

It was Hamlin’s second career NASCAR Camping World Truck Series win, the first coming in this event last year. This was only his second truck series start this season.

James Buescher made up a lap and fought his way back to finish sixth and take over the points lead from Ty Dillon, who finished 28th.

The racing action heats back up Sunday at Martinsville Speedway with the TUMS Fast Relief 500 NASCAR Sprint Cup Series race. Tickets may be purchased by calling 877.RACE.TIX, online at martinsvillespeedway.com or at the track’s ticket office.