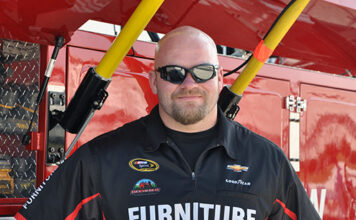 Some of the most important members on any race team are the pit crew members, especially those that go over the wall every Sunday. This week’s NASCAR Behind the Scenes spotlights one of those vital players, Mike Houston, front tire changer and pit crew coach for the No. 78 Furniture Row race team.

“What I do is I’m the pit crew coach and the front tire carrier,” Houston said. “I try to coordinate how we do pit stops, coaching each individual position as well as carrying front tires.”

“I’ve performed every position over the pit wall in the Cup Series, but for most of my career, I have been a tire carrier.”

Since Houston grew up in the heart of racing country, Concord, North Carolina, one would assume that he was involved with racing from his childhood on. But Houston took another very interesting route to end up with his career in NASCAR.

“I grew up in Concord and I never watched NASCAR,” Houston said. “I was involved in other sports, mainly football.”

“When I got out of college, I was bouncing at a night club in Charlotte and I was a professional wrestler at the same time,” Houston continued. “We had a Christmas party for one of the race teams at our night club.”

“I met one of the crew chiefs there and this was just at the very beginning stages of when they were having athletes come into the sport to do the pit crew,” Houston said. “So, we started talking and he asked me to come to the shop and see if I could do it.”

“I was kind of bored one day and decided to go over there,” Houston continued. “So, I just happened to be at the right place at the right time.”

“It doesn’t happen that way anymore.”

In addition to being a collegiate athlete, Houston was also a professional wrestler. His first wrestling name was ‘Minister of Pain’ but then he changed it to ‘Mike Mayhem.’

Houston shared that there are definitely similarities in the other sports in which he has participated, from football to wrestling, to NASCAR. But there are elements of racing that are also quite unique.

“I think that the hand/eye coordination you develop in football really translates into racing,” Houston said. “The physical fitness, training and dedication to the little details that make a difference definitely cross over.”

“It’s also the same rush going over the wall as playing football,” Houston continued. “Usually in racing, you don’t want to get the rush until the pit stop is over.”

“You want to maintain your composure while you are performing and then, if you have a good stop, you can celebrate the moment,” Houston said. “I’ve been doing it for so long while that the pre-butterflies before a pit stop don’t happen anymore.”

“But you do get excited and pumped up when you have a good stop and when you’re running up front,” Houston continued. “It’s along the same lines as sacking a quarterback late in the fourth quarter.”

“It’s also like getting a crowd pumped up before a wrestling match.”

“What is different is that the mind set and the approach in racing is quite different from other sports,” Houston said. “You can’t intimidate a race car.”

“Really it is more about competing against yourself.”

Houston has had many challenges on pit road but his most memorable moment came as a member of a championship pit crew team with five time champ Jimmie Johnson.

“To be able to go to that car and be a part of winning that championship as a pit crew member was one of the better moments.”

While there are highs in racing, like those championship moments, Houston acknowledged that there are also downsides, especially the danger they face every time they go over the wall.

“I think that a lot of things that happen are out of your control on pit road,” Houston said. “I tell the guys that when they go over the wall you can’t have the mindset that a car is going to hit you or that you will have a problem.”

“If you’re thinking of those things, you’re taking your mind off the job you have to perform,” Houston continued. “I do always tell the guys though to keep their eyes down pit road.”

Given the physical presence of Houston, whose nickname is ironically ‘Tiny’, fitness and working out would seem a requirement. Yet while Houston and his pit crew do hit the gym, they also mix it up with some other exercises that just might surprise race fans.

“It makes sense because you want to be as limber as possible,” Houston continued. “A lot of the positions are bending, squatting and getting down on your knees, so those motions of keeping your core strong are helpful.”

“Not to say that any of us are good at it, but we still do it,” Houston said. “You really can tell a difference from the guys who have never done it before because in six weeks the progression they have with their flexibility is incredible.”

“We will also throw in some aquatics and meet up at the Y and exercise in the water,” Houston continued. “We do a lot of low impact because we jump over the wall with a 75 pound tire in our hand and all that weight, whether a fuel can, tire or jack, you are putting all that pressure on your joints.”

“So, a lot of this stuff helps the beating and banging we do on the weekends on our bodies.”

Houston also acknowledged that exercising for endurance is critical for his crew’s over the wall work.

“We don’t really do a lot of lifting weights, but include more of the cardio and things like that to get the heart rate up,” Houston said. “We have one of the longest seasons in the sport and you have to be able to last.”

“For football, you want to be bigger, stronger, faster but we want to be limber, have injury prevention and to prolong the career as long as possible,” Houston continued. “We do a little heavy lifting, but that is more in the off-season.”

“Otherwise, we do more cross fit training or things that help endurance.”

All of this training has in large part contributed to the faster pit stops, moving from 14 seconds on average down to 12 and even 11 seconds for some teams. But Houston advised that it is not always the fitness that gets it done more quickly on pit road.

“When I first got into the sport, nobody thought you would see a 13 second pit stop and I’ve seen the threshold go from 14 seconds, to 13, to 12 to 11,” Houston said. “One of the biggest factors is that the equipment and the engineering on the pit guns have improved.”

“That is a huge advantage that a lot of the bigger teams have right now,” Houston continued. “They’re developing pit guns that allow them to have their changers hit the lug nuts faster and the equipment keeps up with them.”

“Your big teams put money into this kind of development so they have a slight advantage.”

For Houston, there are other vital elements in addition to the new equipment and physical fitness that improve the performance of his pit crew team members. One element is the coaching and mentoring aspect and the other is their relationship with their driver.

“My style of coaching can be tough or encouraging,” Houston said. “It depends on the situation.”

“Usually during race situations, I try to keep calm and not blow a gasket because if you do that, you’re not really helping at that moment,” Houston continued. “If a guy made a mistake, he is already feeling bad because when you make a mistake, the whole team suffers.”

“At that particular time, I try to become more encouraging and positive,” Houston continued. “But in practice but if the guy is making the same mistake over and over, then you’ve got to get up in his grille and say ‘get it together.’

“The drivers that seek out and get to know the guys on their pit crew, it does make a difference,” Houston said. “I think it makes more of a difference on the pit crew side because they believe that their driver cares.”

“That was one thing at Hendrick with Jeff Gordon and Jimmie Johnson,” Houston continued. “We’d play paint ball together or have an outing.”

“We’d do things as a group with the driver involved,” Houston said. “That type of stuff goes a long way.”

Other than the fact that he was a bouncer and wrestler, what else would fans be most surprised to know about Mike Houston, aka ‘Tiny’?

“I always get told that I look unapproachable and that the first impression, with my bald head and goatee make me unapproachable,” Houston said. “My appearance may give a different impression than what I really am.”

“I’m really kind of a teddy bear underneath.”

SM Staff
Previous articleQuicken Loans 400 Preview: Who Will Prevail in the Irish Hills?
Next articleA Pair of Historic Half-Miles for Kraig Kinser this Weekend at Jackson & Knoxville