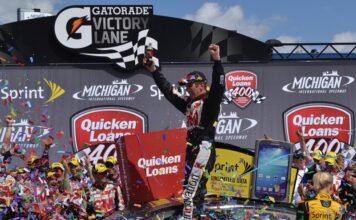 Greg Biffle could not have written a more perfect story on Sunday in the Quicken Loans 400 at Michigan International Speedway.  Partnering with the American Dental Association’s Give Kids A Smile Campaign, grabbing the 1000th victory for Ford Motor Company, and celebrating his victory with his daughter on Father’s Day all made for an unforgettable weekend.

Capturing the 1000th Ford Win was made all the more special that it happened at Michigan.  Not only is Michigan the “home track” for team owner, Jack Roush, it is also home to the headquarters of Ford Motor Company.  Today’s win was a great birthday present for the Ford Motor Company, who is celebrating their 110th birthday today.

When asked about today’s victory, Biffle replied, “It is a pretty special day for us all together.  It is Emma’s first victory lane on Father’s Day.  I am thinking about my dad that couldn’t be here who is hopefully watching.  We are thinking about little Charlie Leffler that doesn’t have a father today.  It is a hard fought battle.  It wasn’t easy.  I kept working on this car and working on this car.  The guys did a great job.  The pit stops were flawless.  You know, we beat the 48 today and that says a lot.  He was really, really fast.  Once we got out in clean air we could match up fairly well with the 48.  He made a small mistake trying to catch us.”

Car owner, Jack Roush, commented on Ford’s 1000th Victory.  He said, “I have been with Ford Motor Company and they have been supporting me for almost 50 years now and we expect to be at our best when we come to MIS and I am glad we could pull it off.  I was a little nervous for a minute there, but I am glad it worked out and glad we could give Ford their 1000th win.

Sunday’s race marked another strong performance for Richard Childress Racing’s, Kevin Harvick, who will be leaving the team at the end of the season.  His second place finish today marks his eighth top-10 and fifth top-5 finish this season.  He is currently fourth in the points, just thirteen markers behind third place, Clint Bowyer, and sixty two points behind leader, Jimmie Johnson.

Current NASCAR Sprint Cup Series points leader, Jimmie Johnson, had a strong run today and was closing on leader, Greg Biffle, in the closing laps when a right front tire blew and ended his chances for a victory today.  The same fate took out Johnson’s teammate, Kasey Kahne, while leading.  Kahne had a strong car and was the pick of many in the garage area to be the car to beat today.  Johnson finished the race in 28th position while Kahne finished 38th.

The woes for Hendrick Motorsports continued when driver of the No. 24 Drive to End Hunger Chevrolet, Jeff Gordon, was caught up in a spin by Bobby Labonte on lap five.  When Gordon was asked what happened, he replied, “ Bobby Labonte lost it off of turn two in front of me.  It was just such a slow spin that I didn’t know which way he was going to go, so I had to guess.  I tried to go around him on the outside and that was not the right way.  I don’t know if I would have missed him even if I went to the inside.”  Gordon fell to 16th position in the points, losing five spots today.

The series now heads to the road course at Sonoma, CA for the Toyota Save Mart 350 on June 23rd.