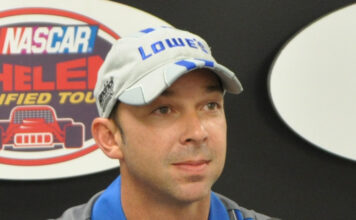 Although Brad Keselowski claimed the pole position for the Camping World RV Sales 301 at New Hampshire Motor Speedway with a new track record of 28.022 seconds and a speed of 135.922 mph, all eyes were on Jimmie Johnson instead as his outside pole position was disallowed because of failed post-qualifying inspection.

The driver of the No. 48 Lowe’s Chevrolet for Hendrick Motorsports will have to start at the back of the pack for Sunday’s race and also will be the last one to do the all important pit stall selection.

Johnson’s problems started even before qualifying as his car had difficulty passing through technical inspection, resulting in the cutting away of the side skirt. Both the driver and team sprinted to the grid just in time to qualify, throwing down a fast lap of 28.026 seconds at a speed of 135.902 mph before having it disallowed.

In an unusual move after the penalty was announced by NASCAR, Johnson’s crew chief Chad Knaus came into the media center to talk about the errors made by his team.

“We had some difficulty as you all know,” Knaus said. “We were late because we had problems getting through the initial inspection before qualifying.”

“We were able to get through but it just wasn’t exactly right,” Knaus said. “We weren’t going to know until after qualifying what the problem was.”

“What ended up happening was there was some issue with the left front and that’s why the heights were so messed up as we were going through initial inspection.”

So, what exactly was the issue with the car that led to the failed inspection?  Initially Knaus joked a bit with the media that they would know all about it if they had watched his show ‘NASCAR Performance’, however, he then explained it in layman’s terms.

“The left side was real high and the right side was real low,” Knaus said. “NASCAR does a really good job making sure the cars are right going through pre-qualifying inspection and knew there was something that was just not jiving right. “

“We were able to get through but then afterwards the car settled, which happens especially at a track like New Hampshire where the cars are so low around the race track,” Knaus continued. “We run a lot of shock and rebound and it takes a little bit for the cars to come up.”

“So, with the way that we’re measuring the heights now, there’s not a lot of room for error,” Knaus said. “And we just had a lot of error.”

“It happens,” Knaus continued. “There are a lot of things you’re trying to do in a brief amount of time.”

“You’re changing springs and shocks and sway bars,” Knaus said. “You don’t have a whole lot of time to get through your final assembly of practice to get the car ready to qualify.”

“We just missed a little detail,” Knaus continued. “That was all our fault.”

“That’s why we were so shocked going through initial inspection,” Knaus said. “We knew something was just not right.”

Knaus admitted that the penalty was a costly one, especially as it related to pit selection. But he also remained confident that, with some strategy, the five-time champion could drive through the field and back to the front of the pack.

“It’s going to hurt us tremendously for the pit selection,” Knaus admitted. “The good thing about Loudon is that if you have a good race car, you can pass.”

“The ebb and flow of the event, the guys in the back typically get a chance to get to the front through some form of pit strategy,” Knaus said. “So, if nothing else we can make it exciting.”

In spite of the mistake of the usually focused No. 48 team, Knaus praised his team and said that there would be no difficulty in regaining their confidence and attention to detail.

“And yes, I can’t say enough about the mechanical department of the 48,” Knaus said. “Ron Malek and the guys and everybody there do such a tremendous job.”

“For us to have one single mistake, we get a bye from that standpoint.”

Knaus also said that it would not be difficult at all for the No. 48 bunch to regroup and regain their focus. But he also acknowledged that he will ensure that this error will not happen again.

“You look at the issue,” Knaus said. “You figure out how to put processes in place where you don’t have any kind of issue again.”

“These things always happen and you guys just don’t see them as much,” Knaus said. “They happen to everybody at a lot of different times.”

When asked what his strategy might be to bring his five-time champion through the field on Sunday, Knaus admitted that he had not even had time to consider that yet.

“That dust hasn’t settled yet.”

“You know what, we’ll have to be aggressive,” Knaus continued. “The thing about this race is that it’s a very short race, 300 laps or so.”

“You have to get in there and you have to be aggressive,” Knaus said. “I’ll look forward to the challenge.”

While Knaus admitted the mistake, he reiterated what may give the rest of his Cup competitors pause.

“But the car is good,” Knaus continued. “The car is really good.”

“We’ve got a really good car and I think it’s going to be plenty fast.”