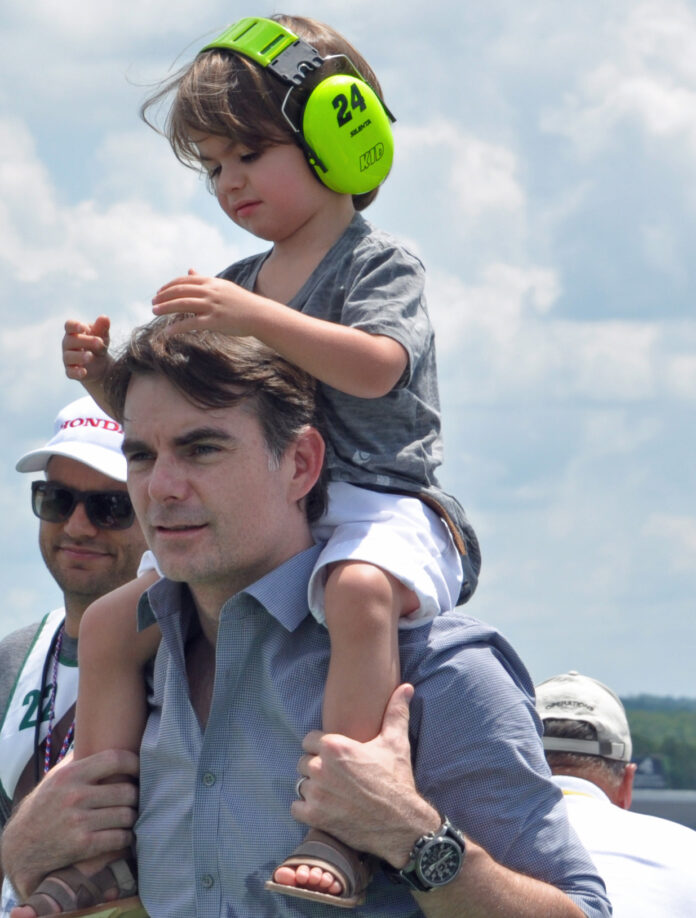 While Jeff Gordon and Kurt Busch are in the Granite state for the NASCAR Sprint Cup race weekend, they were both in a bit of an Indy state of mind, having watched the IZOD IndyCar Series race the weekend before at Pocono Raceway.

Both drivers took in the IndyCar race with their loved ones, Busch with his father and Gordon with his son Leo and his nephew. The only difference was that Busch watched from the safety of his couch while Gordon attended in person, watching the start of the race from the Pocono Victory Lane roof top.

“It was fun to sit on the couch and watch that on Sunday,” Kurt Busch, driver of the No. 78 Furniture Row/Denver Mattress Chevrolet, said. “To understand it from the in-car telemetry and to see the pit strategy side of it, it was just fun.”

“I sat there with my dad and watched the race,” Busch continued. “We were rooting for Marco Andretti and it was just crazy to see how the Ganassi guys came out on top.”

“I was just thinking of it from a purely entertainment standpoint seeing my son see a different kind of car,” Jeff Gordon, driver of the No. 24 Drive to End Hunger Chevrolet, said. “Most of it was for him and my nephew, who was also with me.”

Even as fast as both drivers go in the Sprint Cup cars, Busch and Gordon were also most impressed with the speeds of the open wheel cars at Pocono, which topped over 220 mph.

“It was cool to see the speeds,” Busch said. “The speeds are incredible at Pocono and that track now that it’s smoothed out is why the Indy cars went back there.”

“The track is smooth enough for them to race on and I thought it produced a decent race.”

“For me it was being amazed at how fast those cars go through the corners, corners that I’m used to going through at much slower speeds,” Gordon said. “I was amazed with just the technology of the cars.”

Would Busch or Gordon be interested in racing in the IndyCar Series themselves, especially since both have been exposed to open wheel racing?

“Would I like to drive one of those cars somewhere?” Jeff Gordon asked himself. “Yeah I would.”

“My biggest thing that holds me back from doing a lot of things is I want to be competitive in whatever it is I’m in and I know if I go run five or ten laps, whether it be a rally car or an IndyCar or whatever car, that’s not enough for me to go be competitive,” Gordon continued. “If I can’t go and be competitive in it then I usually don’t have fun.”

“That’s just my personality,” Gordon said. “It’s not about just sliding the car sideways or feeling it stick at 220 mph, it’s about can I be as fast as somebody else and so no, honestly watching that race didn’t persuade me to want to go do it.”

Gordon also expressed some trepidation just based on seeing one of his IndyCar friends James Hinchcliffe wreck hard into the wall on the first turn of the first lap at Pocono Raceway.

“As a matter of fact, when I was speaking to Hinchcliffe on the grid and then moments later he’s spinning back in the wall, the guy barely flinched and he couldn’t catch it,” Gordon said. “I felt bad for him and also thought I had no desire to get in that car.”

For Kurt Busch, the interest in another series may just be something on his horizon since he has not yet inked any deal for his 2014 season.

“It’s been one thing I’ve been trying to answer in my own mind,” Busch said. “There are a lot of irons in the fire.”

“Contract negotiations and things are in discussion, but you try not to let that weigh any on what’s going on right now,” Busch continued. “Right now is the most important thing.”

“I’m living in the present.”

While Gordon and Busch may be in Indy states of mind, they also have to focus on the race at hand at the Magic Mile. And both had good qualifying runs, with Busch moving to the outside pole and Gordon moving to the fifth starting position after Jimmie Johnson’s qualifying time was disallowed due to failing post-race inspection.

“We tested here,” Gordon said of New Hampshire Motor Speedway. “Conditions I think have changed from the test quite a bit on us so it’s pretty challenging.”

“But it’s always a track I look forward to.”

“This track if your car is running well, you can go to the low side and make up a lot of time,” Busch said. “You are not stuck in traffic if you have a good car.”

Busch was especially thrilled with his qualifying run at a time of 28.040 seconds and a speed of 135.835 mph. But he also admitted his time trial lap had some moments that gave him pause.

“For us, our lap was pretty exciting,” Busch said. “I hit the rev chip so soon that I thought the guys missed the setting.”

“It was such a weird lap because I thought we were going to be 20th,” Busch continued. “If we can screw up and be that good, I’ll take it.”

While Busch and Gordon may be in an Indy state of mind, they also have Chase contention on their minds as well. Busch currently sits in the ninth position in points while Gordon is further back in the fourteenth spot.

“To be in the top ten in points is great,” Busch said. “It’s a nice feather in the cap but there is still a long way to go.”

“You can lose points real easily, but it’s tough to gain the points,” Busch continued.  “So basically from eighth to 18th, everybody fits in one shoe box right now.”

Once both Gordon and Busch leave New Hampshire, they will enjoy a rare weekend off and then be in a real Indy state of mind as they prepare for the Crown Royal Presents the Samuel Deeds 400 at the Brickyard Powered by BigMachineRecords.com at Indianapolis Motor Speedway.

For the off weekend, Gordon will be attending a friend’s wedding and Busch will be whisking girlfriend Patricia Driscoll to Argentina for a getaway. But after that, Indy will be totally on their minds and both drivers cannot wait, especially Jeff Gordon.

“I’m very much looking forward to Indianapolis,” Gordon said. “The same thing kind of applies to Indy as it does here at New Hampshire.”

“We tested there which is always great and beneficial,” Gordon continued. “All signs of that test and things that we have planned, I’m very excited.”

“We had a shot of winning that race a couple years ago and I always go to that track with confidence and feeling good,” Gordon said. “When the car and the team are feeling the same way, then that’s a great combination to have.”