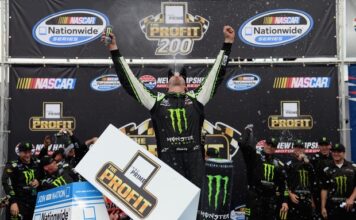 Kyle Busch, driver of the No. 54 Monster Energy Toyota, was giving thanks in Victory Lane to everyone from his higher power, lovely wife and probably his gas man for helping him survive three green-white-checkered restarts to score the Nationwide Series win in the CNBC Prime’s The Profit 200 at New Hampshire Motor Speedway.

This was Busch’s 58th victory in 258 Nationwide Series races, his seventh win in 2013, and his fourth victory at New Hampshire Motor Speedway.

“We didn’t want to have those late restarts,” Busch said. “We felt like we just had enough fuel to make it to the end and then everything keeps happening where guys keep wrecking and spinning to cause the cautions.”

“Besides the hiccup on pit road, we showed our strength and am just glad we were able to take the checkered flag first,” Busch continued. “All in all, we had a great race car today.”

Busch and his crew chief Adam Stevens admitted that fuel was of paramount concern, especially with the multiple green-white-checkered restarts. But they were able to not only have enough to do a burnout but also to drive the car into Victory Lane.

“I knew we had a buffer of fuel but I didn’t know exactly how much,” Stevens said. “When you get down to the small numbers, the calculations get a little bit fuzzy.”

“We kept him out there as long as we felt safe to set it up for that situation at the end,” Stevens continued. “That’s what sealed the deal for us.”

“We pitted two laps after Brian (Vickers, runner up)  so that was part of it,” Busch said. “Brian and the No. 3 car were racing really hard to beat each other too.”

“That all just compounded the fuel situation,” Busch continued. “I bet you there’s still probably a couple of gallons left in our tank.”

Busch also tied Sam Ard’s record for wins from the pole in a season set in 1983, with this his fourth win from the Coors Lite Pole in 2013.

“Wow, every time I get in Victory Lane there’s some sort of record that I tie or break,” Busch said. “That’s cool.”

“Sam was a huge part of the sport and so there’s been a lot of records that I’ve been able to tie or break of his,” Busch continued. “It’s been fun to do.”

“We still pay heritage to those that have made this sport and it is guys like Sam that have done a lot of great things for the sport,” Busch said. “Even down the road, maybe somebody’s going to break my records.”

“Records are always made to be broken so we’ll see who will be better than me.”

Brian Vickers, behind the wheel of the No. 20 Dollar General Toyota, finished in the runner up spot. This was his second top-10 finish in three races at New Hampshire and his ninth top-10 finish of the season.

“It was a good run,” Vickers said. “The guys did their homework back at the shop and we had a good starting spot.”

“We had a really fast car until we had the overheating issue,” Vickers said. “I got some trash on the grill and that definitely hurt us.”

“Once we got that off the grill when the caution came out, we were much better,” Vickers continued. “But the third green-white-checkered, we started to run out of gas and I completely ran out coming to the finish line.”

Austin Dillon captured not only the third place, his second top-10 at New Hampshire, but also secured the $100,000 Dash for Cash winnings for himself and the No. 3 AdvoCare Chevrolet team.

“This race played out exactly like last year’s did for us,” Dillon said. “We didn’t get the track position we wanted after the first stop and then had a four-tire stop and the car just came to life.”

“Super excited to win the Nationwide Dash for Cash,” Dillon continued. “With all those restarts and so close on fuel, I just thank the good Lord above for keeping fuel in that thing for us.”

Brian Scott, driver of the No. 2 ShoreLodge Chevrolet, finished fourth and then a bevy of Ford Mustangs, driven by Michael Annett, Trevor Bayne and Sam Hornish Jr., finished fifth, sixth and seventh respectively.

“This was a great run for Richard Petty Motorsports,” Annett, driver of the No. 43 Pilot Travel Centers Ford, said. “We came back at Charlotte after the injury and just had the worst racing luck I’ve had since I’ve been in the Nationwide Series.”

“Finally, nothing stupid happened and we kept our nose clean and brought home a top-five.”

“We were 15th with five to go so to come out sixth was a good day,” Bayne said. “Overall it wasn’t a great day though because I felt like we had a car that could win the thing.”

“To come out of here sixth, I will take it.”

“Our Ford Mustang was awesome today,” Hornish Jr. said. “We were really good on a long run.”

“We didn’t have any fall off which would have made us really good but we just didn’t get the run we needed to toward the end.”

Alex Bowman, driver of the No. 99 SchoolTipline.com Toyota, was the highest finishing rookie, scoring the tenth spot in the race.

“I think if anybody would have told me I would be sitting in the media center after how we were in practice and at the beginning of the race, I would have laughed,” Bowman said. “We never gave up and my crew chief made a lot of good calls and some people decided to take themselves out at the end.”

“So, we were able to capitalize on the opportunity and come home in tenth.”

With his eighth place finish, Regan Smith, driver of the No. 7 TaxSlayer.com Chevrolet, now has a five point advantage over Sam Hornish Jr. in the point standings. The Nationwide Series will next race at Chicagoland Speedway next week.Kyle