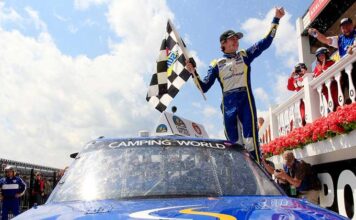 This was the first victory of the 2013 season for the nineteen year old driver of the No. 29 Cooper Standard Ford for Brad Keselowski Racing. This was also Blaney’s first win at the ‘Tricky Triangle.’

“We were good all day,” Blaney said. “We started up toward the front and I was able to get the lead pretty early.”

“We lost some on the pit stop but restarts were the only time you could make something happen,” Blaney continued. “Luckily, we were able to get some good restarts and get the lead.”

“Overall a good day and a good turning point for this team.”

“These Ford motors really gave us the pull we needed on restarts and that’s what it came down to,” Blaney said. “The leader is a sitting duck but I was fortunate enough to get a good restart at the end.”

Although Blaney had not yet heard from team owner Brad Keselowski, who was en route to race in the Nationwide event at Iowa, he had heard from his dad Dave Blaney, both before and after the race.

“We actually talked about restarts and choosing the right lines,” Blaney continued. “That was pretty funny that that’s what it came down to.”

“Very few dads can do that.”

“My first crew chiefing job was with his dad so it’s come full circle for me,” Randolph said. “I have kids Ryan’s age myself so it’s been really fun.”

“Ryan did a great job and we did have a pretty good piece,” Randolph continued. “He does a great job when we have adversity and a great job keeping his composure.”

“The restarts are always very hairy and the two Truck races he has won had multiple restarts.”

“It’s a great day for everybody at BKR and Ford,” Randolph said. “To get this win, we hope this just starts the momentum rolling our way.”

“It was a really solid day for us starting yesterday,” Paludo said. “We were fastest in practice and started on the pole.”

“I made a mistake choosing the outside for the start of the race and lost the lead,” Paludo continued. “And from that time on, I was just trying to get the lead back.”

“By lap 42, I was getting closer and then we had the caution,” Paludo said. “And from that time on, it was just wild restarts trying to be aggressive but not put myself in a bad position.”

“But it’s so hard here because of the long straightaway,” Paludo continued. “Even if you don’t have a good start, you have time to get to the guy in front of you.”

“So, I think it’s a really good day for us,” Paludo said. “We had the fastest truck all day long.”

“It’s a little frustrating to come second but I’ll take it.”

Another driver, rookie driver German Quiroga, behind the wheel of the No. 77 Otter Box Toyota also matched his best career finish with a third place run. This was also Quiroga’s first top-10 finish in his solo Pocono race.

“I want to thank Miguel because he helped me in one of the restarts,” Quiroga continued. “We started fourth and lost a couple of positions.”

“But then we came back and I’m very proud and happy about that,” Quiroga said. “We were very consistent and we were having fun.”

“I love this track,” Quiroga continued. “It was my first time and I really, really like it.”

“I like the Truck Series,” Quiroga said. “What else can I say?”

“Hopefully I can bring that 77 truck to Victory Lane soon.”

Joey Coulter, with his new No. 18 Fox Sports 1 Toyota Tundra, finished fourth and Ross Chastain, behind the wheel of the No. 2 Watermelon.org Ford, rounded out the top five.

“It was just wild,” Coulter said. “That’s the fun part about Pocono.”

“It turned out to be a pretty good day for us.”

The race was not without controversy. Veteran Todd Bodine, driving the No. 30 Team Fox/Whelen Chevrolet, was not happy when the caution flew, taking away his lead and relegating him to an 11th place finish after spinning on one of the green-white-checkered restarts.

Other unhappiness broke out between Ty Dillon, driver of the No. 3 Bass PRO Shops/Tracker Boats Chevrolet, and Johnny Sauter, behind the wheel of the No. 98 Carolina Nut Co. Curb Records Toyota, who tangled with one another in the melee.

Matt Crafton not only maintained the points lead, currently at 52 points ahead of Jeb Burton, but he also continued his streak of top-10s. The driver of the No. 88 Rip-It/Menards Toyota finished in the eighth position.