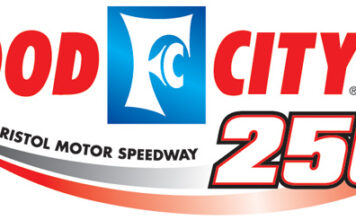 Lights, camera, action! The Nationwide Series charges into “Thunder Valley” this weekend for Friday night’s Food City 250 at Bristol Motor Speedway. TriStar Motorsports will be busier than ever as they will enter five cars in the 32nd Annual event.
Cole Whitt will step into the No. 10 Gold Bond Toyota, Jeff Green will be behind the wheel of the No. 14 Hefty®/Reynolds® Toyota, Mike Bliss will pilot the No. 19 Tweaker Energy Shot Toyota, Chad Hackenbracht will drive the No. 44 Tastee Apple, Inc. Toyota and Chase Miller will enter the No. 91 TriStar Motorsports Camry.

Bristol a Favorite for Bliss (@MikeBliss19):

Friday night’s Food City 250 at Bristol Motor Speedway will mark Mike Bliss’ 19th NASCAR Nationwide Series start at the .533-mile concrete “stadium” oval. Tweaker Energy Shot will be back on board Bliss’ No. 19 Toyota Camry for 250 laps, under the lights, at one of NASCAR’s most exciting venues.

“Genuinely Bristol is a really fun track to race at,” said Bliss whose best finish at Bristol came in 2007 when he placed 13th. “You have to mentally be on your game all race long and know that you’re bound to get a couple tire marks on your door. Composure is a key element to finishing well at Bristol.”

Green Back in the No. 14 as McClure Sits Out another Week:

Jeff Green will pilot the No. 14 Hefty®/Reynolds® Toyota during Friday night’s Food City 250 at Bristol Motor Speedway. The team’s regular driver, Eric McClure, was admitted to a local hospital on August 12 and was diagnosed with acute renal failure after a series of tests.  The Virginia driver’s creatinine levels were elevated, signaling improper kidney function.  McClure is still receiving treatment, but is hopeful to be released from the hospital this week.  His status remains week to week.

The former NASCAR Nationwide Series Champion, who drove the No. 14 Hefty®/Reynolds® Camry last weekend at Mid-Ohio for friend and teammate Eric McClure, won the spring Bristol event in 2002 and has started from the pole twice. Also, Green has earned nine top-five finishes and 10 top-10 finishes in his 28 starts at the .533-mile track.

“My thoughts are still with Eric, his family and his recovery,” said Green. “I’m honored he has allowed me behind the wheel of his Hefty®/Reynolds® Camry and I hope we can earn a good finish for the team.”

Chad Hackenbracht, driver of the No. 44 Tastee Apple, Inc. Toyota will continue behind the wheel as he makes his Bristol Motor Speedway debut Friday night. The New Philadelphia, Ohio native will continue his streak of “firsts” in the NASCAR Nationwide Series, as he’s eager to hit the famed short track in Bristol, Tennessee.

“I’ve been anticipating Bristol since I set my schedule in February,” said Hackenbracht who led a lap during his Nationwide Series road course debut last weekend at Mid-Ohio Sports Car Course. “I’m really hoping we have a better outcome for our Tastee Apple, Inc. Toyota this weekend. I’ve never raced anything quite like Bristol, which makes me even more excited to race on Friday.”

Friday night’s race at Bristol will be Hackenbracht’s fourth race with TriStar Motorsports and his fourth NASCAR Nationwide Series start of his rookie season.

Chase Miller to Debut the No. 91 Toyota at Bristol (@ChaseMillerRCN):

For the first time this season, the No. 91 will make an appearance with Chase Miller at the helm. Making his second start for TriStar Motorsports, Miller will attempt his sixth NASCAR Nationwide Series start at Bristol Motor Speedway. His best Nationwide start at Bristol came in the spring race when he started 23rd.

Whitt and Gold Bond to Take Over the No. 10 for Bristol (@ColeWhitt):

Cole Whitt, who typically shares seat time in the No. 44 for TriStar Motorsports, will take over the No. 10 this weekend with Gold Bond as the primary sponsor. Whitt will make his fourth NASCAR Nationwide Series attempt at Bristol. The No. 10 is not within the top-30 in Nationwide Series Owners points; therefore Whitt will have to qualify in on time against 49 entries.

“I’m really looking forward to racing at Bristol”, said Whitt whose best finish came at this event last August when he finished a hard fought sixth place. “I’m really thankful that Gold Bond decided to come on board for the weekend. I hope we can keep up the momentum from Watkins Glen and earn another good finish for them.”