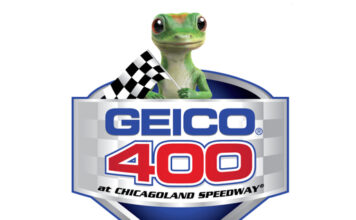 Ford Racing NSCS Notes & Quotes:
GEICO 400 (Chicagoland Speedway)
NSCS Post Race Quotes
Sunday, September 15, 2013CARL EDWARDS, No. 99 Fastenal Ford Fusion – “There are a couple of things I wish I could take back. I tried the high side one time and about five or six guys freight-trained me on the bottom. The last restart we all just kind of fought for the bottom and I had to check up or I was going to wreck Greg (Biffle). That got us. Other than that, the strategy I think was very good to have good tires at the end. Our car was as fast as anyone at the end. We needed things to fall a little better and I needed to make better decisions in our Fastenald Ford.”

HOW DID THE RAIN DELAY AFFECT YOU? “The rain delay was just what we needed. WE weren’t very good and it was good to regroup. The track changed a little and that played into our hands. It’s a lot like Atlanta. As a group I don’t think our Roush Fenway Fords – we are just missing something at this style or race track. Once we go back to Kansas with a little more grip I think we will be really good.”

GREG BIFFLE, No. 16 Post-It Ford Fusion – “That was a rough night. We had major issues in the pits. I don’t know what happened. We started from the back a few times and it is really hard to get track position to pass. Our car was pretty good but every time we got ourselves worked up there, something happened. Something broke. I thought the motor broke but it must have been something on the exhaust system. We were down quite a bit of power the last 100 laps. We just tried to keep our momentum up. The restarts just killed me. I just didn’t have the power on the restarts. Once it stretched out a little we were pretty good and could keep up. It was really tough. We were hit and miss a little bit tonight. This wasn’t our best night but we pulled off a 16th place finish. Everybody kept working hard. That isn’t the way we wanted to start but we had a pretty fast car at times.”

HOW WERE THE RESTARTS WITH THE NEW RULES? “They were fine. Same as they have always been I think. Unfortunately for us we broke something. I don’t know if it is down a cylinder. I had a hard time getting going on restarts. Other than that, restarts were fine tonight.”

BRAD KESELOWSKI, No. 2 Miller Lite Ford Fusion – “It was a lot of up and down for us. We started second and were running up front for awhile and then had some problems with a pit stop and then some kind of vibration that we couldn’t identify. We lost all of our track position and the last run we just dug really hard to salvage a seventh. I think we were probably a top-five car. I don’t know if I had anything for the 20 or 18. It is hard to tell because we never got a shot to find out.”

HOW AWARE WERE YOU OF ALL THE ENGINE ISSUES OUT THERE? “I saw the 88 blew up. The temps were way down outside and the cars were really turning a lot of RPM and that just puts you in the failure zone and that is what we saw out there today.”

MARCOS AMBROSE, No. 9 DeWalt Ford Fusion – “That was a good night for our DeWalt Ford team. We were loose in the day but the car was so much better at night. We lost some handling at the end and couldn’t get back into the top-10, but the guys worked hard to really improve the car today.”