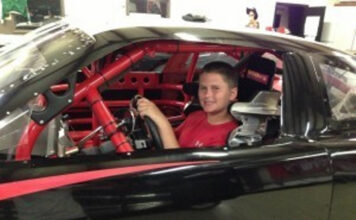 In spite of being an eighth grader and just thirteen years old, Todd Gilliland, son of NASCAR driver David Gilliland and grandson of Winston West champion Butch Gilliland, continues to impress with his skills behind the wheel of a race car.

In fact, the youngster most recently finished in the runner up position in the Southeast Limited Late Model race at Myrtle Beach Speedway in South Carolina.

“We started in fifth but I dropped back to thirteenth because I was saving my tires for the end,” Gilliland continued. “I started to work my way back up and I got up to second with five laps to go and then there was a caution.”

“That was the green, white, checkered and I just couldn’t pass the guy,” Gilliland said. “I didn’t win but I got second.”

“I was really excited,” Gilliland continued. “I knew we were fast the whole time but didn’t know if I could get a top five.”

David Gilliland, proud papa, was also most impressed with his progeny, especially at a challenging track like Myrtle Beach.

“It’s a very tough race track, concrete like Darlington,” Gilliland said. “The fall off throughout a run is like two seconds so it’s all about tire management.”

“I thought this would be a real challenge for Todd because he really doesn’t understand what it’s like to be running on tires with no grip,” Gilliland continued. “Dang, if we didn’t go down there and he was fastest in every practice, qualified fifth and then the race started.”

“I told him to really watch his tires and on lap five he had dropped back to ninth,” Gilliland said. “I wasn’t sure if he was doing what I told him or if there was something wrong.”

“He got all the way back to about 15th and I told him not to go any further back than that,” Gilliland continued. “We rode for about 50 laps and then with about 40 laps to go, I told him it was time to go.”

“And boom, boom, boom he drove all the way up to second,” Gilliland said. “He was actually underneath the leader with three laps to go and the caution came out.”

“The rules for this race were that all restarts in the last 20 laps were single file,’ Gilliland continued. “So, it put the leader in front of him and in the last few laps, he got back to the leader’s bumper but didn’t have enough to get past him so we finished second.”

“It was an amazing race,” Gilliland said. “He’s thirteen years old, he’s in eighth grade and it’s amazing to me that he does things on the race track that it took me 500 races and 15 years to figure out.”

“I’ve had numerous amount of people come up at the race track and tell me how unbelievably good he is.”

The Myrtle Beach race was only Todd Gilliland’s third in a late model. Prior to that, Gilliland raced quarter midgets and even won the 2013 National USAC Quarter Midget Championship, World Formula Division.

“So, that was over in July and from there, we actually sold the cars in Indianapolis at the last national event,” David Gilliland said. “I thought we would get some late models and go testing because you can’t run any NASCAR races until you are fourteen years old.”

“I thought we would get ahead of the curve and practice this year and get ready to race next year,” Gilliland continued. “We went out and tested the first time and had the owner of Performance Racing Warehouse and some big names in late model racing went with us.”

“After Todd’s first day of testing, I got in the car and shook it down and made sure it was good for Todd,” Gilliland said. “Then he got in and by the end of the day, he was as fast as I was.”

“The next time we tested, we had two cars, so I got in one and told Todd we were going to work on restarts and passing each other,” Gilliland said. “So, he followed me for a little bit and then I told him on the radio that I was going to try to pass him.”

“But I couldn’t get within a car length of him.”

Todd Gilliland’s first late model race was at Hickory, which was supposed to be short fifty-lapper with a limited number of cars. Unfortunately, that race ended up being cancelled.

“On the same day, they were having their end of the year, big race of the year called the Fall Classic,” David Gilliland said. “It was scheduled to be a hundred green flag lap race and like thirty cars.”

“My wife said ‘You’re not going to put him in that for his first race are you?’ and I told her he would get a lot of experience,” Gilliland continued. “Todd was fastest in both practices in his first race ever.”

“He qualified ninth and finished sixth,” Gilliland said. “If there were ten more laps he would have won the race.”

“It was incredible,” Gilliland continued. “He saved his tires and just had a great feel for the race car.”

In Todd’s second late model race, he was fastest in practice but with just two minutes to go, his motor broke. He went to a backup car but got caught up in an accident after driving from 20th to 5th.

Before the youngster was competing in late models, Todd Gilliland had a passion for going fast.

“I started when I was five,” Todd Gilliland said. “I like going fast and competing with everybody and trying to be the best you can be.”

“Todd raced his first race on his fifth birthday,” David Gilliland said. “He was out across the street when he was three years old, he drove a quarter midget in the dirt field and would run every day until he ran it out of gas.”

“It’s always been his passion.”

Todd Gilliland currently balances his racing with his school work. In fact, the eighth grader has to keep his grades up in order to even be allowed by his parents to hit the race track.

“I work on the car after school,” Gilliland said. “I like to play soccer and basketball.”

“Math is my favorite and science is my least favorite.”

“I’m pretty busy,” Gilliland said. “We stay up all the time and work on the weekends too.”

“Todd works on the car too,” proud papa Gilliland said. “My deal with Todd is that we will go racing if he gets straight A’s in school.”

“He’s done that and is on the honor roll at school,” Gilliland continued. “I’m pushing for his education first and racing second.”

“He does like working on the race car and every day he wants to learn more.”

Both father and son have a mutual admiration, especially when it comes to racing.

“I want to be like my dad because he is really good,” Todd Gilliland said. “I hope to race in the Cup Series someday like my dad.”

“The weirdest feeling was when we went to the race track for his first start, watching him back out of the pits, pushing the clutch on the car, put it in gear and drive away,” David Gilliland said. “That was a feeling and a time and a moment that I’ll never forget.”

“I remember him being born and he was two weeks old when I won my first asphalt late model race and he’s been around the track his whole life,” Gilliland continued. “I know he’s good enough to go as far as he wants and I want him to do that.”

“It’s been fun watching Todd grow as a person,” Gilliland said. “Racing has helped him with his confidence and to mature as a person.”

“He’s a very kind, quiet young man and people like being around him,” Gilliland continued. “Those are the things that are most important in life to me.”

“And those are the lessons that I’m enjoying seeing him learn and grow.”

Todd Gilliland races out of the shop in his home and for the team that bears his father’s name, David Gilliland Racing. His sponsors are Performance Racing Warehouse and Superior Logistic Services.

While the Gilliland family is taking a break from the race season to celebrate the holidays, both father and son are both anxious to start the New Year at the track.

“I’m loving racing these cars,” Todd Gilliland said. “It’s still new to me but I’m having a lot of fun.”

“I can’t wait for next year to run more tracks and get more experience.”

“Todd loves racing and he has a passion for it,” David Gilliland said. “Stay tuned, he has a bright future ahead of him.”

For more information about Todd Gilliland as he continues to impress in the racing world, follow the team at ToddGilliland.com and on Twitter @ToddGilliland_.