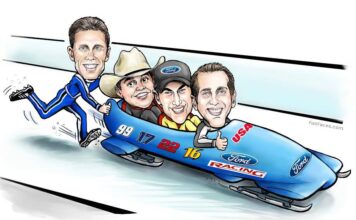 This past weekend, the 56th running of the Daytona 500 kicked off the 2014 NASCAR season, while the Winter Olympics wrapped up business in Sochi, Russia. Yet, as disparate as the competition was, from stock car racing to ice dancing, there were some surprisingly similar story lines when all was said and done.

Both the Daytona 500 and the Winter Olympics undoubtedly featured gold medal performances, including the first US gold medal in Alpine skiing, as well as the Great American race win by NASCAR’s most popular driver.

And yet interestingly enough for both competitors, Ted Ligety and Dale Earnhardt Jr. respectively, their gold medal, award winning performances ended up like weights being lifted off their shoulders.

“This is the event I wanted most,” Ligety, the first American man to win two Alpine skiing gold medals, said. “It’s the event I’ve been putting so much pressure on myself to win, so to pull through is an awesome feeling. I’m super happy.”

“It was a heavy weight that was lifted.”

While the runner up position might feel like a triumph to many athletes, to the US Women’s Hockey team and to Joe Gibbs racer Denny Hamlin, second place was an absolute disappointment.

The US Women’s Hockey team surrendered a two goal lead in the final period of the game, losing to their Canadian rivals, who scored the gold.

“We were up two goals, so it’s heartbreaking and shocking that we didn’t win the game,” forward Kelli Stack said. “It feels like a bad dream.”

Just like the US Women’s Hockey Team, who appeared to have everything going for them until the bitter end, Denny Hamlin, behind the wheel of the No. 11 FedEx Express Toyota, was having a stellar Speedweeks, winning the Sprint Unlimited and one of the Duels.

But then along came the Daytona 500, where the driver had an almost catastrophic situation develop in that he had not radio communication with his spotter. Between the radio issue and the loss of speed, Hamlin finished a disappointing second in the Great American Race.

“Our cars just weren’t as good as the week progressed,” Hamlin said. “Maybe we were the same, but the competition definitely got better. It wasn’t as easy to pass as it was early in the week.”

“It’s a tough business,” Hamlin continued. “Our car was OK. Given the right circumstances, it was a race winner.”

Another similar storyline that emerged from both the Daytona 500 and the Winter Olympics were those inspiring Cinderella stories. In the Olympics, one such story was Mikaela Shiffrin, who became the youngest slalom champ in Olympic history at age 18.

Her run, however, was not completely smooth as she lost her balance a bit going through the gates and also lost her left ski which rose way too far off the course.

She persevered and did not give up, moving from having what she described as a “terrifying” run to an Olympic gold medal run.

“It’s going to be something that I chalk up as one of my favorite experiences for the rest of my life,” Shiffrin said. “But my life’s not over yet.”

In the Daytona 500, another Cinderella story unfolded with rookie driver Austin Dillon, who was bringing the storied No. 3 car back to the track after being driven by the late Dale Earnhardt, Sr.

Dillon actually started the Great American race from the pole position, battled some difficulties and some crashes throughout the race, yet finished in the top-10 as the highest finishing rookie.

“I think the yellow stripe on the bumper (signifying a rookie) showed a little bit tonight, but we made it through it,” Dillon said. “It was fun. I had a blast. The car was fast.”

Every Olympic athlete, as well as every NASCAR driver, goes into competition with the full intent on doing their very best. Unfortunately, things sometimes go awry and the defeat can be a most bitter pill to swallow.

Both Shaun White, infamous snow boarder, and Martin Truex, Jr., behind the wheel of his new ride in the No. 78 Furniture Row Chevrolet, shared their own versions of the agony of defeat.

White lost out on a medal after crashing in the halfpipe competition, ending his ‘three-peat’ effort.

“I didn’t really get to break out everything, which is frustrating. Tricks were still in my pocket,” White said. “I definitely knew what run I wanted to put down, and my dream scenario was I was going to land that first run and then maybe have the opportunity to do something that hadn’t been done before. I tried to win. I went for it.”

Martin Truex Jr. had a similar experience to White in that he started out with high hopes on the outside pole for the Daytona 500, only to crash out in the qualifying race, relegating him to the back of the starting field in a backup car.

Then on lap 32, Truex’s backup car blew an engine and his hopes and dreams went up in smoke with the car.

“It’s definitely a tough break for the team,” Truex said. “I went to bed the night before the race thinking this was my best chance to win the Daytona 500.”

Just Happy to Be in the Show

In both the Olympics and the Daytona 500, there are competitors that are just happy to be part of the even itself, no matter where they finished. And for the Jamaican bobsled team as well as for Michael Waltrip, sometime racer and broadcaster, that was just the case.

“It’s a great race for the fans and it was really fun to be out there and to be part of it,” Waltrip said after finishing 41st in his No. 66 Blue-Def/AAA Toyota.

The Jamaican Bob Sled team finished 29th in their two-man competition, yet remained as upbeat as ever, channeling their inner ‘Cool Runnings.’

“We have the athletic ability. We have shown we can do it,” Chris Stokes, president of the Jamaica Bobsleigh Federation, said. “We just have to pull things together in Jamaica itself.”

In the End, It’s All About Family

Whether in NASCAR or the Olympics, the athletes and teams who compete only do so with the support of their families and extended families.

For Olympic Skeleton racer Noelle Pikus-Pace, it was all about her loved ones as she slid to a silver medal, all with her family by her side. In fact, the mother of two, a 6 year old daughter and a 2 year old son, said that her children were her inspiration as she trained for the international competition.

“After all of the hard work that not only I but my family put in to achieve this dream, it came in those minutes, those seconds,” Pikus-Pace, 31, told PEOPLE of her Sochi success. “It really was a fairytale ending.”

The same fairytale ending was true for the Hendrick family in NASCAR, with Hendrick Motorsports driver Dale Earnhardt, Jr. in victory lane and HMS teammates Jeff Gordon and Jimmie Johnson in the top-five.

“Oh my God, I am so excited for the Hendrick family and Hendrick Motorsports right now,” Jeff Gordon said. “This team did an amazing job and gave me a great race car at the end of the show.”

And so as the Olympic flame was extinguished and as the confetti flew at the end of the Daytona 500, the competitions ended with very similar storylines.

For the Winter Olympians, there will be a four year hiatus and wait until the next big event. But for the NASCAR competitors, the next race is simply around the bend at Phoenix International Speedway next weekend.