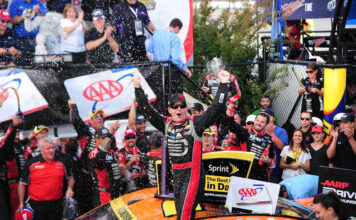 As the tributes to Jeff Gordon continue to pour in, most recently from Darrell Waltrip’s pronouncement of Gordon as one of the ‘Greatest of All Time’ NASCAR drivers, some of the most poignant reactions to have been from long-time Jeff Gordon fans.

And for them, the news that Gordon will step out of the car after this season is simply personal.

“I followed him casually since he came into the sport so I’ve always been a fan, but I turned rabid ten or so years ago,” Linda Caracciola said. “Honestly it was a combination of things ‘Jeff’ that hooked me. Obviously he’s an incredibly talented racecar driver, but when I started listening to him in pre and post-race interviews, he really impressed me.”

He’s a class act,” Caracciola continued. “Then add to all of that what he does off the track philanthropically, he’s the total package.”

“And he’s not hard on the eyes either!”

Caracciola learned of her favorite driver’s news on Twitter. At first she thought it might be a joke or a rumor, but then she was simply stunned.

“I just sat there for a few minutes trying to process it,” Caracciola said. “I knew the day was coming, but I honestly didn’t expect it yet. I thought for sure he would race two more years and throw in his fire suit after the 2016 season.”

“The realization that I would only have this season to watch my driver race made me incredibly sad.”

“Now that the reality of it has sunk in, I’m still really sad that this will be his last season,” Caracciola continued. “Jeff is my driver. It’s not like stick and ball sports where you have your team. Players on that team come and go, but that’s still your team.”

“NASCAR is a different animal. When your driver retires, you can’t just randomly pick another driver and decide to be a fan. It’s a feeling you have to have, and for me, I don’t know if I’ll ever feel as passionate about another driver. I feel like I’ll be transitioning from a Jeff Gordon fan to just a NASCAR fan. At least for now…”

Like Caracciola, Jack Lewis, a NASCAR and Jeff Gordon fan since the age of four, is also struggling with his driver’s decision to step away from the sport.

“In 1993, my father went to Pocono Raceway while I stayed home,” Lewis said. “Naturally, I told him “buy me something” from the track, and he chose a Jeff Gordon flag to purchase for me. His reasoning was because his souvenir trailer was the most colorful of them all!”

“I first heard about Jeff’s announcement via an alert on my smartphone,” Lewis continued. “I was shopping and came to a dead stop after I read it–in shock, initially. It was something I knew was only a matter of time before it happened, but still, when you read something like that, you can’t help but be a little shocked.”

While both Caracciola and Lewis were saddened and shocked by their driver’s decision to step out of the car, both are very thankful for the memories and for the great Gordon moments that they have been able to experience.

“I have two favorite moments,” Caracciola said. “One has to be the first time I was at a race that he won. It was the June Pocono race in 2011. I cried… I’d watched him win for years but it was an amazing feeling to be there to see it in person.”

“The other, of course, was the first time I met him. He was exactly as I expected him to be.”

“There’s so many Jeff Gordon moments as a fan,” Lewis said. “Some of the best are his first Daytona 500 win in 1997, but the best had to be staying up until early Sunday morning in 2012 to watch Jeff come from multiple laps down to finish 2nd at Richmond and get into the Chase. Another that comes to mind was the Homestead win in 2012 after everything that happened the week before.”

While both Caracciola and Lewis wish that Gordon would reconsider and continue to race, they both want him to do whatever makes him happiest.

“After 2015, I would love to see Jeff do TV and still be very visible in the sport,” Lewis said. “I know that he’s mentioned he will still be at the track, so I am sure we will all see Jeff around the race track in years to come, just not behind the wheel.”

So, what would these two die-hard, personally attached Jeff Gordon fans say to their driver given the chance?

“If I could say one thing to Jeff, I would simply say ‘thanks’,” Lewis said. “Thanks for being such a great role model, thanks for paving the way for so many other drivers to make their way into NASCAR, thanks for giving back so much (with his foundation).”

“If it weren’t for Jeff Gordon, I’m not sure if I would even be a NASCAR fan,” Lewis continued. “It may not be much to just be a fan, but I feel like NASCAR plays such a role in my life (and Sundays throughout the year), and I have Jeff to thank for that.”

“And most of all, thank you for being Jeff Gordon.”