Jimmie Johnson Jogs A Lap Around Martinsville Speedway With Students 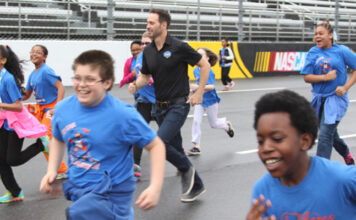 But Wednesday Johnson was pushed to the limit at the historic half-mile oval … by a fourth grader.

It was a different type of Martinsville race for Johnson. He was sporting sneakers instead of Goodyear Eagles. It was a single lap instead of 500 like he’ll be running in the STP 500 on March 29. He has made 26 Sprint Cup starts at Martinsville and completed 12,939 laps, but his recent lap was a first … the first he has ever run on foot.

“It’s such a great race track and I have so many fond memories of race wins here, but it was definitely my first time on foot around here,” said Johnson.

The six-time NASCAR Sprint Cup champion made a stop at Martinsville Speedway to spread the gospel of physical fitness to about 40 elementary school students in a media event to help promote the STP 500.

Johnson has helped end much of the speculation over the age-old argument of whether stock car drivers are athletes. He is a runner, cyclist and swimmer and competes at a fairly high level in all three disciplines.

After demonstrating stretching and warmup exercises Johnson ran a lap with the Go Far Club from Rich Acres Elementary School, a group of about 40 fourth and fifth graders dedicated to physical fitness in general and running in particular.

A couple of his Sprint Cup wins have come easier at Martinsville than his lap against the kids. Braxton Boitnott, a fourth grader, led much of the lap, held off Johnson out of the fourth turn before a photo finish with the Cup champion.

“It’s a good moment, It’s real good,” the young Boitnott said, hands on his knees as he caught his breath on the start-finish line after sharing a high-five with Johnson.

“Watching a few of the kids leave the starting line a little hard, I knew they were going to fade,” said Johnson.  “I was thinking about how cool it was to be here on foot and see the track so quiet and calm and then I started heckling some of the kids down the backstretch for starting out too hard.

“Then I caught up with Braxton in the center of three and four and then we sprinted in together. It was really a fun day.”

Johnson remained at the start-finish line, high-fiving and congratulating every one of the young runners as they finished. Johnson then led the entire group into the Infield Media Center where he posed for a group victory-lane-like photo, signed personalized autographs for each child and even was included in a few selfies.

“Because I do a lot of kid-focused events, I always try to find opportunities to interact with the kids, so I came into today with high expectations and they met them. It was an awesome day.”

The students had the same feeling.

“It was the coolest day,” said Jeffrey Medley, “ because … it’s not every day you get to run with Jimmie Johnson on the Martinsville Speedway,”

Prices increase the week of the race.

Tickets to the STP 500 on March 29, the Kroger 250 on March 28 and the Virginia Lottery Pole Day on March 27 can be purchased by calling 1.877.RACE.TIX. Tickets may also be purchased online at www.martinsvillespeedway.com.