On the Edge with Ed – Fontana Edition 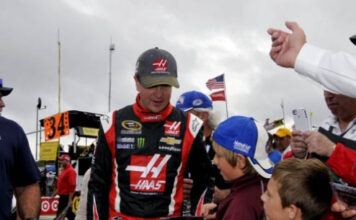 Kurt Busch. Much has been said about the 2004 champion in this early season but after being back from his suspension Busch has been all business. His first week back in his car, Busch finished fifth at Phoenix. Although behind teammate Kevin Harvick, who won the race, Busch was pretty happy.

When they unloaded in Fontana, Busch was fast and so was Harvick and it was no surprise when they shared the front row after qualifying, just two hundredths of a second apart.

After qualifying Busch said, “The adrenalin is going at a good pace right now and I got a good feeling from yesterday when I visited the Haas headquarters to see the employees and the different customers that came by and to feel the love from them was extra-special.”

Busch continued to say, “And to deliver for Gene Haas today here in Southern California is special. He’s based his company here and it’s great to come to this track and produce a pole in just our second week back. It really shows the strength of the team and how we need to capitalize on it now.”

During the race in Fontana Harvick and Busch led 99 of the 209 laps with Busch leading a race high 65 laps. At the end of the race, as cautions for wrecks, almost wrecks and debris caused numerous restarts; it seemed that it was between Busch and Harvick to settle it. Until Brad Keselowski showed up and stole the win as Greg Biffle’s car spun down the front stretch. In the past NASCAR seemed to throw a caution flag when this happened but Biffle got his car rolling and out of the way as the leaders came through the back stretch. Keselowski’s pass on the white flag lap was a heartbreaker for Busch but he took it in stride.

“It was a fantastic day,” Busch said post race, “The Haas Automation Chevy was fast. Thanks to Monster Energy, Mobil 1, State Water Heaters, all our great sponsors. It was a solid day. I don’t know what we could have done different. We just got pinned in by the yellows and the sequence at the end on which tires we needed to have to optimize how many laps were left. We had two tires; Keselowski had four. We didn’t need that extra yellow at the end and I just got out muscled by Keselowski.”

Busch also added, “It was fantastic to drive and the way that everybody chipped in on building the car, the pit sequence we just got hung out on the yellows at the end. When do you pit to put four tires on, when do you pit to put two tires on? That last restart I just didn’t get the job done.”

There was much discussion post race about the fact that NASCAR did not put out a yellow and freeze the field when Biffle spun, but even if they did, it appeared that Keselowski would have been the winner, but it was close. For the previous caution, when it was Busch leading and Harvick in second, Busch simply said on his radio, “WWE,” in reference to a pro wrestling analogy.

Richard Buck, NASCAR’s managing director of Sprint Cup Series said via Fox Sports, “We got multiple reports over the radio and confirmed it. There was a piece of material, something, in the racing groove and so we went ahead and called a caution. And by the time that we had called the caution, somebody had hit it.

“He continued, “I don’t have it back yet (the piece of debris). I don’t have the piece back yet, but we always ask the safety and cleanup crews to return that stuff to us. But there were multiple reports.”

I believe the piece of debris was off of Kyle Larson’s Target Chevrolet that resulted from contact as the cars jockeyed for position on a restart. I don’t believe there was a call from anyone just to keep Busch from victory lane in Fontana. It was just bad racing luck after running a great race all day. It always troubles me when fans think that NASCAR did this for excitement. The piece of debris was clearly shown on television monitors. NASCAR made the right call as far as I am concerned.

Busch is returning to the scene of his only victory last year this weekend at Martinsville Speedway. I think that he will get his victory this season; that team has not missed a beat since his late return.

Ed Coombshttp://www.sportshooter.com/coombse
Ed began covering NASCAR for the former Gater Racing News regularly in 2000. He began working with Speedway Media in 2003 by supplying exclusive photos from the races covered. Currently he is the Editor and Assistant Publisher of Speedway Media. He also manages staff and credentialing. With the closing down of Gater News after nearly 50 years he hopes to become a more regular contributor at Speedway Media as a writer and photographer. My Twitter name is @coombsed feel free to follow me I am a member of the National Motorsports Press Association.
Previous articleToyota NASCAR Notes & Quotes Martinsville March 2015
Next articleAJ Allmendinger, JTG Daugherty Racing, Martinsville Speedway Preview