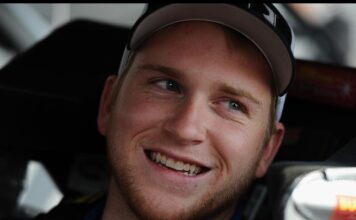 With Mother’s Day weekend right around the corner, Chris Buescher’s mother Donna reflected on the exciting year that her son has had so far, running so well that he is in contention for the NASCAR XFINITY Series championship, as well as getting an opportunity to race with the best in the Sprint Cup Series.

And if she could sum up her feelings in two words about her son, they would be blessed and proud.

“It’s been phenomenal and we are extremely blessed,” Donna Buescher said. “I thank God every single day for his accomplishments, I seriously do. He has his talent first of all, but he has always seemed to be at the right place at the right time with the right people to help get him to where he’s at today.”

Chris Buescher’s story is a bit unusual for sure as he does not come from a long line of racers and has no family racing pedigree.

“We’re not a racing family,” Donna Buescher said. “We are just huge NASCAR fanatics. We always were watching on TV. His dad is a car buff and always was working on something in the garage. Chris has always been in the garage with him from the time he was little helping him work on the cars.”

“Chris has been involved with racing his entire life. He started on dirt bikes and he has always been involved every weekend. That has been his passion ever since he was little.”

Buescher admitted that her family has had to make some sacrifices along the way, but she is quick to say that every one of them has been absolutely worth it, from financial sacrifices to allowing Chris to pursue his dream and leave the family nest in Texas.

“To some degree, we had to sacrifice,” Buescher said. “We were fortunate enough to get him started, up to the ARCA level. But if Mr. Roush hadn’t signed him then we would not have been able to go forward. We just could not have afforded it.”

“We had to make some sacrifices on the weekend, especially for his two sisters. I worked every single weekend in real estate so I never had weekends off. The girls had to stay with sitters because my husband Jim would be at the races with Chris.”

“The biggest sacrifice that we have had to make though is having Chris move away from home,” Buescher said. “My husband came home and showed me a report he had from his testing that week. They were comparing Chris to some other talented drivers and that was the biggest high of my life.”

“And then he turned around and told me that the bad news was that he had to move to North Carolina to be where he needs to be. I just lost it. I started bawling.”

“That was the best and worst day I guess. But, for the most part, we have been very fortunate and have not had to make the sacrifices that some racing families have had to do.”

Donna Buescher said that there have been many rewards as a racer’s Mom along the way, including watching Chris grow and succeed through every phase. But there is one thing that she wishes a little more of for her son.

“I’ve always felt like he should get a little more attention,” Buescher said. “I think any Mom feels that way. We always want our kid to be front and center. But it sometimes feels like as he has come through the ranks, he was not mentioned as much, maybe because he wasn’t from a racing family or didn’t have a lot of money in his background to help him through it.”

“I felt like he was a bit overlooked, right or wrong. It’s the Mom thing I guess. But as I heard so and so being talked about I wanted to say, ‘What about my baby? What about Chris? He’s doing just as good as they are!”

And while Mom Donna hopes that the attention continues to grow for her son, she also thinks there are a few other things that fans need to know about Chris Buescher.

“I don’t think most people know, but he is extremely smart,” Buescher said. “Chris was always at the top of the class and in the 99 percentile with all of his grades.”

“He was involved with the Duke program where they identify the higher achieving kids in seventh grade and he was surpassing ninth and tenth graders in the testing. He has always been extremely intelligent but he is so quiet that a lot of people don’t see that aspect of him.”

And that quiet intelligence is what makes Chris Buescher such a good race car driver, at least from his Mom’s perspective. That smartness also gives her comfort when she sees cars go spinning or wrecking, like during last weekend’s race at Talladega.

“I’m always nervous, but not in the sense of him getting hurt,” Buescher said. “That might sound strange, but I know the sport is so safety intensive. I do worry, but I know he is so smart.”

“I go back and watch his races,” Buescher continued. “Every day, I watch at least one race. And when I see the accident coming, I’m really watching how he anticipates it.”

“Every time there is a big one, like at Talladega, you can see how he anticipates it. He watches the drivers, sees what they are going to do and learns from them. So, he kind of has mastered how to avoid the accidents.”

“He has had very few wrecked cars his whole entire racing career. I just went back and watched the Talladega race, three times actually, and I can always see him backing up. He may lose a few spots but he almost always avoids the big accidents.”

Like many mothers, Donna Buescher is also dedicated to ensuring that her son stays humble and appreciates every opportunity that he has been given.

“He has not so far let anything go to his head,” Buescher said of her son. “I’ve been telling him since he was little though that he better not get a big head or Mom would be stomping on him! I have no tolerance for people that don’t appreciate where they came from so I’m always warning him that Mom will be there to knock him down if he gets a big head. And he knows it is true!”

So, how will Chris Buescher’s Mom be celebrating Mother’s Day?

“Unfortunately, I won’t be at the track this weekend,” Donna Buescher said. “My daughter’s birthday is Friday and she will be seventeen. So, we will celebrate with her. And we have a nephew who has just moved to Austin and James Buescher’s mom is coming into town for the weekend. So, we will all be celebrating Mother’s Day together.”

Although not at the track, Donna Buescher will be remembering all of the wonderful cards, breakfasts in bed and a beautiful outdoor swinging bench that her son has given her as special gifts along the way. And she will be celebrating in her own heart the success of her young up and coming racer.

“I just cannot say how happy I am for Chris,” Donna Buescher said. “I’m so proud of him and proud of the man that he has become.”

“In my eyes he is perfect. And I love him to death.”