Surprising and Not Surprising: Coke 600 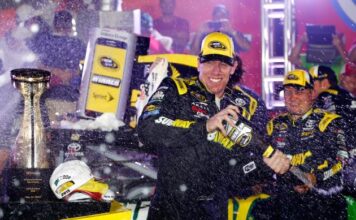 With every driver well-versed on the name of the soldier memorialized on each car, here is what was surprising and not surprising from the 56th annual Coca-Cola 600 at Charlotte Motor Speedway.

Surprising: While there was a plethora of doubling down at the Coke 600, most of the results were not so positive. Jeff Gordon, for one, did his own version of the double, piloting the pace car for the Indy 500 before the NASCAR race.

“To come down that front straightaway the first time and hear that crowd cheering for the cars, the drivers, and this amazing event …to be able to hear that from inside the pace car with the windows down is just amazing,” Gordon said. “Not to mention that the pace car has to get after it pretty good out here because that last lap is 100 mph and through the corners, maintaining that is something.

“So that was definitely cool. A huge thrill and a huge honor.”

Unfortunately, Gordon did not have a positive result after his double down as he finished a disappointing 15th place in NASCAR’s longest race of the season with an ill-handling race car.

Gordon’s teammate Jimmie Johnson also did his own version of the double, which was not positive twice over. The driver of the No. 48 Lowe’s Patriotic Chevrolet spun twice to finish 40th at a track where he has traditionally performed so well.

“We just had a really loose racecar,” Johnson said. “We came in with an aggressive mindset to bring an aggressive set-up in the car, drive aggressively and take chances. We said we were going to come in and swing for the fences. We did and I hit the fence.”

The only successful double down was achieved by none other than Landon Cassill, who finished the Coke 600 in the 39th spot but then ran from Charlotte Motor Speedway to the NASCAR Hall of Fame.

Not Surprising: The best quote of the long race day into night was, “Is the race over yet?” It was no wonder that Carl Edwards asked that question of his team in what seemed to be a never-ending fuel mileage race to the checkered flag.

“This one feels different,” Edwards said after getting confirmation that the race was indeed over and he had won. “I don’t know how to explain it other than to just say that it’s a big relief, and more than that, it’s just a big opportunity.

“Now we can go and just become better, and that’s what we need.”

Surprising: While Kyle Busch returned to the track for the first points paying race after his injuries from a Daytona crash, teammate Denny Hamlin suffered his own medical issues in the car. Hamlin, who had played 36 holes of golf and a game of tennis prior to the race, suffered a bad headache and dehydration after the race.

“Probably overdid it a little bit this weekend,” Hamlin said. “I think the dehydration led to a migraine and just felt nauseous the last 100 laps or so.”

“I feel pretty good. All in all, I felt like that was a great race for us,” Busch said. “I admit I’ve probably got a little left foot soreness, but other than that, everything is pretty hunky‑dory.”

Not Surprising: Given that it was the longest race of the season, it was no wonder that at least two engines expired, one of young Ryan Blaney in the Wood Brothers No. 21 and the other of David Ragan with Michael Waltrip Racing.

“We were fighting hard to get back on the lead lap and looks like something happened engine related – we got really, really hot and something happened internally,” Ragan said. “Disappointed that we had a lot better race car, but saw some encouraging signs that we had some speed in qualifying and the race as well, but we just need to put a race all together.”

“We, unfortunately, had an engine problem,” Blaney said. ”It was really unfortunate. It sputtered and started to go maybe half a lap before and then it really went up. I didn’t expect it to really explode like that.”

Surprising: Greg Biffle celebrated his 450th start with a stellar finish, taking his No. 16 Ortho Ford to the finish line in the runner-up position.

“I’m really excited for the team and the organization,” Biffle said. “We’ve been working really, really hard on our cars. It’s been well documented how bad we’ve been running, so it feels good.”

Not Surprising: While Martin Truex Jr. has been knocking on the door of his first win of the season, having the fastest car in the last two races, fuel mileage bit him yet again, resulting in a fifth place finish.

“We had a very fast car all night,” Truex said. “It really hurts knowing that you had the fastest car and didn’t win. I don’t know what to do about fuel mileage races. I’ve never ever in my entire career come out on the right end of them.”

Surprising: Even with a third place finish, NASCAR’s most popular driver Dale Earnhardt Jr. was disappointed by not winning a race near and dear to his heart.

“We’ve got a win so it doesn’t really matter,” the driver of the No. 88 Nationwide Chevrolet said. “We would like to win more races. I want to win this one. I don’t know how many more chances I will get at it.”

Not Surprising: The fragmentation of the Stewart-Haas Race team continued, with Kevin Harvick and Kurt Busch finishing ninth and 10th, while teammates Tony Stewart and Danica Patrick finished 21st and 22nd respectively.

“It was a really frustrating night,” Patrick said. “The car just felt like it was dragging down the straightaways. It’s the most frustrating thing in the world when you see everyone drive past you, but we dug deep and did our best to get everything we could out of the car.”

“It was a long race. I hate to see it come down to fuel mileage, but that’s part of the game too,” Keselowski said. “It was hot. I burned my foot and didn’t feel good, but it’s a tough race. I gave it all I had and felt good about the effort we gave.”

“The sun started going down and our car was not good. Nothing got better,” Logano said. “We went one way with something and went back the other way and nothing.

“There was never one good thing about the car. Usually you at least get a good exit or a good center and I was just fighting way too much stuff.”

Not Surprising: Brett Moffitt in his No. 34 CSX “Play It Safe” Ford was the highest finishing rookie, taking the final lap in the 31st spot.

“It was a long race, that’s for sure,” Moffitt said. “In the middle of the race, we got the CSX Ford running pretty good. We just got stuck a couple laps down and could never get them back. Cautions weren’t falling in our favor, so we didn’t get any extra help there. But we learned a lot and we’re thankful to CSX for the support.”

The Cup Series moves up the east coast to the Monster Mile for the next race, the 46th Annual FedEx 400 benefiting Autism Speaks at Dover International Speedway.