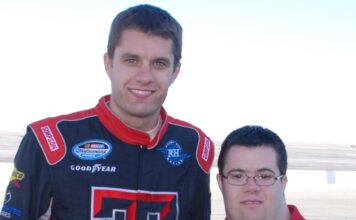 In spite of all the changes in his life on the track, NASCAR driver David Ragan’s commitment off the track to raising money for the LuMind Research Down Syndrome Foundation has remained steadfast.

So, on July 6th through July 8th, Ragan will jump out of his Michael Waltrip Racing No. 55 Aaron’s Dream Machine and into his road rally car to raise funds and awareness for Down Syndrome cognition research.

This is the second year of the event, which features teams of decaled cars making ‘pit stops’ at various places, from its beginning at Darlington Raceway and Museum in South Carolina to the finish at various race shops in Charlotte, North Carolina.

“It obviously was a great event last year so this will be the second annual event,” Ragan said. “It was such a success and everyone had such a good time that the LuMind Foundation decided to do it again in the southeast region. The participants really enjoyed learning about the history of NASCAR, spending time with some of the Hall of Famers, and it was a great chance to introduce people to the sport while raising some money for the Down Syndrome community.”

While some of the teams may be repeats from the first annual event, there are also newbies who will be taking on the road rally challenge, including Ragan’s new race family at Michael Waltrip Racing.

“We have some of the same people coming back for the second year, but we also have quite a few new people,” Ragan said. “I would say so far half to three-quarters of the ones who raced last year are coming back again. Then some folks that couldn’t make it last year are making it part of their schedule.

“We try to keep it at that 20 to 25 team number. That’s a good number to visit the stops and travel in a decent manner.

“They are starting at Darlington Speedway this year, with a tour of the race track and the museum there. Then they are going to Charlotte. There are a few of the same stops as last year, like Charlotte Motor Speedway, the Richard Childress Race shop and Hendrick Motorsports, but we added a few more new ones like Michael Waltrip Racing and the Go Pro Motorsports complex in Mooresville and the pit stop school in Mooresville as well.

“The folks at MWR have been so accommodating with this. It all starts from the top and Michael certainly understands the relationship that we have with the fans. So, he goes above and beyond to accommodate any fan that comes to our shop like this.

“The folks at Aaron’s have also been very good to work with as well. At Michael Waltrip Racing they are going to be checking things out at the shop, learning more about my new team and then they will have a short break there before heading to the Go Pro Motorsports complex.”

Unfortunately, Ragan himself will have to interrupt his road rally schedule due to additional testing at Kentucky Speedway for the new rules package. But he will get by with a little help from his friends and family.

“I’m going to have to miss that stop at MWR to test so some of our team and maybe my father will show everyone around,” Ragan said. “I’ve got a few teams myself with some friends and I’ll stop along the way and visit to have some fun with the group.

“There may be a little rivalry as far as raising the most funds. I’ve got a few more fans on my Facebook page and through Twitter so I may have a bit of an advantage there. But my Dad’s pretty savvy with all the NASCAR-related history so it should be a fun event.”

Ragan is also passionate about the Race for Research Road Rally because he sees the need on a daily basis, as well as the need to call more attention to those impacted by Down Syndrome and their families.

“There are a lot of charitable events in the NASCAR community that get a lot of attention,” Ragan said. “That says a lot about the NASCAR family because there are so many charities that are close to the hearts of drivers, race team owners and sponsors.

“But they all rally around and anytime we ask for donations or visiting some of the shops, everyone is so accommodating. We’re all grateful that we are healthy enough to pursue our racing dreams all around the country so we enjoy giving back.

“And the Down Syndrome community is something that is important to me because my older brother is affected. There are a lot of other families, whether at other shops, those that work for NASCAR, and even in the media group that are impacted by Down Syndrome. Once you start talking about it, a lot of people come out of the woodwork that are in the same boat as we are.”

When the checkered flag flies on the final stop in the road rally, Ragan hopes that he will have accomplished his goals of raising dollars and awareness, as well as helping NASCAR fans have fun.

“I’m hoping we can raise awareness and money for research for young kids and adults who have Down Syndrome,” Ragan said. “At the end of the day, this impacts so many families. It doesn’t get the notice or mentions that a lot of other disabilities get.

“So, if we could just create an awareness and certainly some money to fund research, that is my number one goal. We achieved that last year, having raised over $100,000 which was a great amount. But we also raised awareness with folks that may not know or understand what the Down Syndrome community experiences. And that’s a great thing.

“We hope that fans will check out the LuMindRaceforResearch.org website to learn more, make a general donation or donate to their favorite road rally team.

“Just look into it, have some fun and if you are a NASCAR fan, it’s a great opportunity to get some behind the scenes visits to your favorite race shop or race track.”