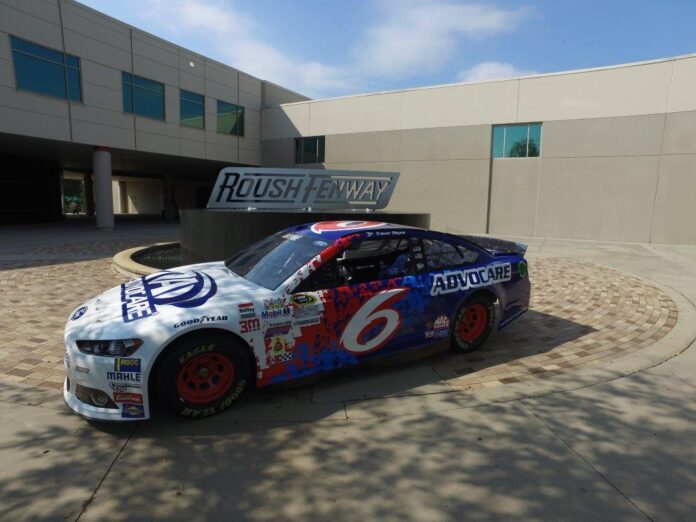 CONCORD, N.C. (Aug. 27, 2015) – AdvoCare and Roush Fenway Racing driver Trevor Bayne have gone back in time to 1998 for their paint scheme on the No. 6 AdvoCare Ford Fusion in preparation for the “Southern 500” NASCAR Sprint Cup Series (NSCS) event at Darlington Raceway on Sunday night, Sept. 6.

The scheme, which was featured on the No. 6 Ford during one of the most successful runs in NASCAR history, harkens back to the 1998 and 1999 seasons when it was driven by former Roush Fenway driver Mark Martin. During that timeframe, Martin recorded nine wins, 41 top-five finishes, 52 top-10 finishes and had an overall average finish of ninth in the combined 77 races run in the two NSCS seasons. During that two-year span Martin led an astonishing 2,430 laps.

Bayne and the No. 6 team will run the scheme as a part of Darlington’s “Tradition Returns” program, which will feature several NASCAR throwback schemes from various teams throughout the Labor Day weekend.

“It’s a huge honor to run this paint scheme in Darlington,” said Bayne. “This scheme was so successful in the late 90’s with Mark (Martin) driving it and it’s really cool to see it back on the track and on No. 6 Roush Fenway Ford again.”

“It will be really cool to see that car back on the track,” said Martin, who won seven times in 1998 while sporting the scheme. “It will definitely bring back a lot of great memories. We had a tremendous amount of success during that time period and I look at it as one of the best periods in my racing career. I hope all the guys who worked very hard on our team during that time will enjoy seeing it back on track again and that they will have a moment of pride in what we were able to accomplish.”

“I want to thank AdvoCare for giving us the opportunity to run this scheme,” added Bayne. “Hopefully we can give it the same kind of run that Mark gave it back in the day and get a solid finish in Darlington on Labor Day weekend.”

The No. 6 was Roush Fenway’s first NASCAR entry and served as the flagship team for the organization during its first 20 years. During that span Martin drove the No. 6 Ford to 35 wins and forever forced the number’s historical significance in NASCAR history.

The NSCS will take the green flag at Darlington Raceway on Sunday, Sept. 6 at 7 p.m. ET, with the race broadcast live on NBC, MRN and SiriusXM NASCAR Radio (Ch. 90).

Backed by the latest science, AdvoCare provides innovative nutritional, weight-management, and sports performance products. In addition, the AdvoCare business opportunity empowers individuals to explore their ultimate earning potential. AdvoCare was founded in 1993 and is headquartered in Plano, Texas. For more information about AdvoCare visit www.advocare.com.  Be sure to like us on www.facebook.com/advocare and follow us on Twitter – @AdvoCare.