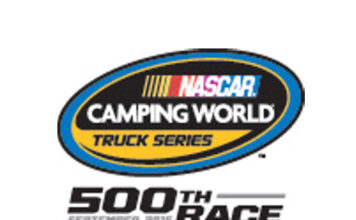 MATT CRAFTON, No. 88 Rip It/Menards Toyota Tundra, ThorSport Racing
Finishing Position: 2nd
Did you have anything for the 33 truck in the closing laps?
“The 33 (Austin Dillon) was definitely a little better. We missed it a little today. We fought tight, tight and just kept freeing it up and I was just a little too free on the short run right there. I don’t know what I was doing wrong, but I was missing my restarts so bad. My teammate Johnny (Sauter) helped me on those last couple restarts and gave me a good shove and got me down in there. I just missed it and we’ll get them next week.”

How was the race?
“It was a very eventful day without a doubt. We missed it qualifying for sure, we didn’t qualify nearly as well as we wanted to and just kept tuning on it all day. My restarts were beyond pathetic right there at the end. Johnny (Sauter) kept helping me get my feet off the ground on the last restart when I had a lot better one, but still left something to be desired for sure. All in all, it was pretty good, but I would say we had about the third best truck here and came out of here second. I’ll leave with that and run.”

How closely are you watching the points battle between yourself, Erik Jones and Tyler Reddick?
“I’m really not that truly worried about that. We’re just going into each and every race and just try to lead laps and win the race and if we do that we get max points. Kyle (Busch) was pretty interesting with what he did when he was leading the race and pulled over and slowed down a half straightaway to let his teammate go. That was interesting we’ll say. All in all, we just have to keep racing and putting this Menards Toyota Tundra up front every week and the points will come. We’ll see where we’re at in Homestead.”

What was the strategy on the last call not to come to pit road?
“Junior (Carl Joiner, crew chief) told me to do what the 33 (Austin Dillon) did the he faked and we stayed with him and I looked up and the majority of the field came behind us and I’m like, ‘Uh oh, this might be bad right here.’ All in all, it was a good day and we were three laps short and all those yellows did help us right there at the end and put us in our fuel window. I can’t thank these guys, every week they give me such an amazing truck to drive and I’m having a blast.”

Are you looking forward to next week’s race at Las Vegas Motor Speedway?
“Vegas, without a doubt, that’s definitely one of the ones I check off on my calendar and love to go out there. There’s a lot of family and friends and stuff that come out there to that race. I only lived about six hours from there where I grew up. It’s pretty much the closest home track that we come to so it’s always a lot of fun and great race track. The groove usually moves around quite a bit and the trucks put on a great show there as well.”

JOHNNY SAUTER, No. 98 Nextant/Curb Records Toyota Tundra, ThorSport Racing
Finishing Position: 3rd
How was the race today?
“First of all I screwed up in qualifying spinning out leaving pit road, I feel like an idiot for doing that. Proud of everybody at ThorSport on our Nextant Aerospace/Curb Records Toyota – that was a solid effort. I knew we had a good truck yesterday after practice and track position is so important anymore you could be a couple tenths faster than the guy and catch him and you just can’t do anything with it. To pass that many trucks today and try to push my teammate for the win there at the end and we both just couldn’t get going. Nonetheless, proud of everybody at ThorSport, this is a good run, especially for the hole I started out the day for us.”

TIMOTHY PETERS, No. 17 Toyota Tundra, Red Horse Racing
Finishing Position: 4th
Is there a lot of momentum with your team right now with another top-five finish?
“I sure hope so. We’ve just been working really hard. Really wanted to do well here. I think sixth is the best that we’ve done. We just fought free and then we fought tight one run, but we had a loose right-front wheel. Then that last run we took two tires and we were just a little too free. All in all, great effort by everyone on this Red Horse Racing Tundra. Great run last week, great run this week and going into one of my favorite places next week with a lot of momentum.”

ERIK JONES, No. 4 Toyota Tundra, Kyle Busch Motorsports
Finishing Position: 7th
How was today’s race?
“We just missed it by a long ways. We didn’t get the finish we wanted and we’ll just have to go back and make our Tundras a little bit better. It’s just we can’t do that this late in the year – we can’t be that far off. We’ll just have to work on it and figure out what was wrong and how to be better here for the next six weeks.”

How do you feel heading to Kentucky Speedway for tonight’s NASCAR XFINITY Series race?
“I’m good. Hopefully we’ve got a good car over there. We struggled here today by quite a bit. It definitely wasn’t the run we wanted, so hopefully we’re a little bit better in Kentucky tonight and we can go out there and finish the day off on a positive note.”

What are your thoughts on holding a seven-point lead in the standings?
“I thought it would have been a smaller lead than that I guess after that run, but it’s nice to salvage a decent day out of it. Definitely not what we wanted. The 88 (Matt Crafton) had a really good day and we just struggled all day. I feel good about it still – as long as we can keep getting ourselves a little bit better and keep running fine, we’ll be alright.”

GRAY GAULDING, No. 54 Krispy Kreme Toyota Tundra, Kyle Busch Motorsports
Finishing Position: 10th
How was your race?
“I feel like we had a really good Krispy Kreme Tundra all weekend – very solid. We knew we were probably top-five, top-six is where we probably would have finished, but we had a bad pit stop and unfortunately that kind of put us back and then we got a caution we didn’t need to get, so that put us behind. We never quit fighting. We still ended up in the top-10. Can’t thank Krispy Kreme, Toyota, KBM (Kyle Busch Motorsports) enough, Shannon (Rursch, crew chief) and all these guys. It was really fun to be able to as soon as we unloaded the truck be solid. Good we got a top-10, but I know we should have been way better. You’ve just got to roll with the punches sometimes.”