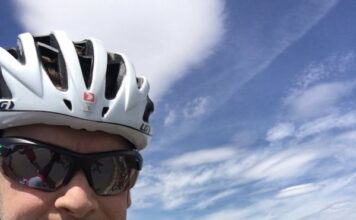 Finishing top-20 in a grueling race at the Monster Mile on Sunday apparently was not enough for Landon Cassill. The driver of the No. 38 MDS Transport Ford for Front Row Motorsports, along with fellow competitors Jimmie Johnson and Josh Wise, took to another track on Monday, participating in a 102.7-mile bike race.

This week’s NASCAR Behind the Scenes focuses on both of Cassill’s big rides, the first at Dover and the second featuring 10,357 feet of climbing to the summit of Mt. Mitchell State Park in North Carolina.

“On Sunday at Dover, we kind of battled with our car all day and had to scratch and claw to keep ourselves in the mix,” Cassill said. “We adjusted on the car almost every pit stop.  It wasn’t our best performance of the year but we were fortunate to miss the big wreck and kept going after that. I guess at the end of the day we got the points and the finish and that’s all that matters.”

“Then on Monday, we got up at 4:00 am and flew from Dover to Spartanburg, South Carolina with Jimmie Johnson on his plane,” Cassill continued. “That got us to the starting point of the bike race at the Spartanburg Auditorium in downtown Spartanburg and continued along the Blue Ridge Parkway. And then the race was up the summit of Mt. Mitchell in North Carolina.”

“Jimmie actually was the lead guy for us in terms of logistics and putting things together.”

Cassill was one of about 800 plus cyclists participating in the 41st Assault on Mt. Mitchell, along with several other NASCAR colleagues competing to the top.

“There were a couple of other NASCAR industry guys, one from the 11 car and one of the engineers from Stewart-Haas Racing, in the competition, Cassill said. “But as far as drivers it was Jimmie, Josh and myself.”

“Josh beat us. He’s a pretty strong cyclist.  Jimmie got second and I was the third of the drivers. So, I’ve got some work to do and I need to get back into bicycling shape to hang with them again.”

“It took almost seven hours to complete,” Cassill said. “You have to carry your fluids, your food, your gels and everything you need to stay fueled up with you on the bike. I think I ingested maybe 2,000 calories during the entire ride.”

“And I probably had 150 ounces of fluid, so there were a few potty breaks and a couple stops to refuel. But I probably stopped no longer than 90 seconds at one time. It was a quick stop, refuel, get back on the bike and get back to biking.”

So, why on earth does Cassill feel compelled to put his body to such demanding tests by racing on Sunday and extreme biking on Monday?

“Well for one, it makes me a better driver,” Cassill said simply. “You know, it’s a good hobby but it’s valuable to my driving career.”
“At the end of the day, what we do in NASCAR is an endurance sport. So any type of endurance training I can do to complement that is important.”

“There is also a lot of training and a lot of work to keep the focus for that long,” Cassill said. “There are a lot of people that took twelve hours to complete the bike ride so that is pretty mentally taxing if you ask me.”

“That is also what makes what we do so special in a race car as well.”

In spite of the incredible stress that he put on himself with his two big rides in just two days, Cassill advised that he was doing well afterwards in spite of it all.

“I haven’t been training heavily the last two months and I signed up for this ride just four weeks ago. I hadn’t really trained for it, so I feel like from a fitness standpoint, mostly from my base fitness that I built up for the past few years, I’m really kind of happy that I got it done.”

Not only are these challenges good for his racing, but Cassill also feels that he is living out one of his sponsor’s values, that of Snap Fitness.

“Snap Fitness loves supporting what I do,” Cassill said. “They believe in me and our sport and our fans. Anything I do along these lines, I feel like Snap is all over it. It’s pretty cool to have their support.”

Cassill did indeed reach the mountaintop in his big ride after the Dover race. Yet in spite of that, he has set a new goal and fitness challenge for himself.

“I’m going to do a half iron man in Dublin, Ireland,” Cassill said. “So, that will be a swim, bike and a run, so I’ll add that to the cycle training.”

“This is just a good kick in the pants for me to kick start my new season of training and to set new goals.”