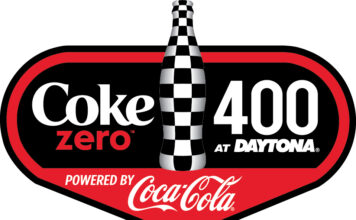 Runner-Up Result: Denny Hamlin finished second in Sunday’s NASCAR Sprint Cup Series race at Sonoma Raceway, following a thrilling last lap battle with eventual winner Tony Stewart. Hamlin led a race-high 33 laps but was running second on the final lap behind Stewart after chasing him down following the final caution with 14 laps to go. Hamlin took advantage of a mistake by Stewart in Turn 7 and nudged his way to the lead. But Hamlin wheel-hopped the #11 FedEx Cares Toyota entering Turn 11, opening the door for Stewart to pull alongside, making contact in the process. The contact caused the #11 to brush the outside wall allowing Stewart to retake the lead, beating Hamlin to the checkered flag by 0.625 seconds. Hamlin started sixth and was running eighth when he made his second scheduled green flag pit stop at lap 45. As the FedEx crew was servicing the car, a well-timed caution waved. Since Hamlin was one of only two cars to pit prior to the caution, he stayed out as the rest of the lead lap cars pitted, catapulting the FedEx car to second for the restart with 61 laps to go. With track position at a premium, Hamlin would lead twice and race among the top-three for the remainder of the event, allowing him to make the last lap move on Stewart. The second place finish is Hamlin’s seventh top-10 result of 2016 season and moved him up two spots to 11th in the NASCAR standings after 16 of 26 regular season races.

Denny’s Daytona Design: The Series heads back to Daytona International Speedway for the first time since Hamlin’s historic victory in the season-opening Daytona 500, when he edged Martin Truex Jr. at the checkered flag in the closest finish ever in the Great American Race. As a gift for winning the 2016 Daytona 500, FedEx offered Hamlin the chance to design his #11 FedEx Toyota paint scheme for the return trip to the World Center of Racing in July. The black, red and white design is attached. Hamlin has finished in the top-six in the last five Sprint Cup Series races at Daytona, including a third-place result in 2015 after leading 10 laps.

What are your thoughts heading back to Daytona for the first time since your Daytona 500 win?

“Daytona will obviously always be a special place for me after finally winning here at the Daytona 500 in February. We have had so many good runs at the track, and won so many non-points races there, that it was such a relief to get that big victory to open the season. I’m sure all of those memories will come rushing back when I go through the tunnel this week, and I’m confident that we can run up front and try to go back-to-back on Saturday night in the #11 FedEx Toyota.”

Official Release
Previous articleReed Hopes to Continue Momentum at Site of First Win
Next articleHot 20 – Would reducing the dangers of Daytona also reduce its thrills?