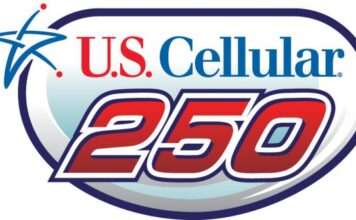 NEWTON, Iowa (July 31, 2016) – It was a much better visit to Iowa Speedway for NASCAR XFINITY Series (NXS) driver Ray Black Jr. and his SS Green Light Racing team this time, as they fought hard under the lights Saturday night to secure their fourth Top-20 finish of the season. The driver of the No. 07 ScubaLife.com Chevrolet was able to capitalize on his car’s speed and stay out of trouble on the track to finish 20th during the U.S. Cellular 250.

“We really needed a race like this after Indianapolis last weekend,” said Black. “It was just a solid weekend right from the start this time. We unloaded pretty fast and just kept working to make the car better from there. I knew we would have a great car once the sun went down Saturday night, so I was very excited coming into the race.”

Black and his team were fast in both practices, finishing in the Top-25 throughout the weekend. They would go on to make it through two rounds of qualifying to earn a 22nd place starting position for the U.S. Cellular 250.

Once the green flag dropped on Saturday night, Black settled in to race in the Top-25 while battling a snug race car. After expertly avoiding a string of cautions for incidents on the track and making a couple pit stops, Black’s car began handling better, allowing him to experiment with different lines on the track.

Just after halfway through the race, Black found a line that really worked for him and began picking off his competition. He would race as high up as 18th before having to pit to top off on fuel and finishing 20th.

“I’m really proud of my team and how this weekend went as a whole,” explained Black. “We started off strong and just kept getting better and better. We learned a lot this weekend and it was a definite improvement from our race here in June. I’m looking forward to taking this momentum with us next weekend when we visit our first road course of the year.”

Next up for Black and his team will be the Zippo 200 at Watkins Glen International on Saturday, August 6.

Fans can keep up with Ray Black Jr. by following him and his sponsor, ScubaLife, on Facebook, Twitter and Instagram at @RayBlackJr and @TeamScubaRacing. Learn more about Ray Black Jr. and Team Scuba by visiting www.rayblackjr.com and www.teamscuba.com.

About Ray Black Jr.
Ray Black, Jr. grew up in Florida after relocating from Montgomery, Alabama at age 9. It was here that Black fell in love with deep sea diving after a couple of scuba trips with his father. His passion for motorsports came later at age 14 after playing some racing video games. He began competing in the Florida Mini Cup Racing Association (FMCRA), where finished in the Top-5 in every race and secured the FMCRA Junior All Star Championship. In 2013 Black moved up to racing pro late models and then into the NASCAR Camping World Truck Series in 2014. During that year, he got his first taste of true NASCAR racing when he competed in seven races for SS Green Light Racing. In 2015, Black competed in his first full season of NASCAR in the Camping World Truck Series, where he finished 11th in the championship standings with one Top-5 and 11 Top-15 finishes. Black will compete in the NASCAR XFINITY Series for the 2016 season. Learn more at www.rayblackjr.com.

About ScubaLife
ScubaLife is more than a website; it is a comprehensive resource for those who are passionate about the water.  Members receive access to a wealth of information that helps guide them to plan the best water sport experience. ScubaLife provides members with world-class support, affiliate resources, Professional Liability insurance, educational programs and access to our worldwide partner network. Members can also now receive discounts on general insurance rates for their homes, automobiles and more. ScubaLife can help you find new ways to relax, discover new recreational opportunities and explore the infinite possibilities of a water lifestyle through promotional savings to help you save on hotels, water activities and much more.  ScubaLife helps you discover the unknown, which at times is a place, but more commonly, and importantly, a state of mind. Check out ScubaLife’s all-new website today at www.scubalife.com.