Hot 20 – Sunday at Talladega, one of NASCAR’s few must see events 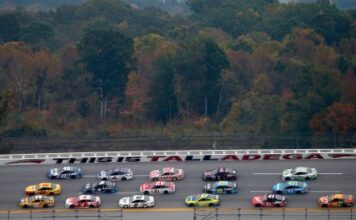 On Sunday, we will have one of those races, on one of those tracks, that provides must-see action. While we have no announcers covering NASCAR today who you might tune in just to hear their description of the action, to hear them enhance the excitement, even those we got can not detract from the spectacle we shall witness on Sunday.

Only former champions Jimmie Johnson and Kevin Harvick come to Talladega feeling rather relaxed. Both have already advanced to the next round of the Chase, while Chase Elliott needs a win himself on Sunday to move forward. As for the nine others still in the mix, they need to either do well or avoid a disaster, and Talladega tends to foster concern for the latter. Good for the fans, but real worrisome for the competitors.

NASCAR should be worried. My SpeedwayMedia.com colleague John Harlow made some interesting points in his recent column. He reminded us that NASCAR is still without a title sponsor for the Cup series next season, with Sprint hanging up the phone. They were hoping someone would bite for 10-years and a cool billion dollars. I once hoped Santa was real. Life can be so disappointing. John mentioned how the old guard of team owners is, well, getting old. It happens, but usually, new blood is seen rising up through the mist. Does anyone see the next Rick Hendrick, Roger Penske, Joe Gibbs, Jack Roush, or Richard Petty on the horizon? Me neither.

When NASCAR decided to go Hollywood, to add some glitz and glamour, they did it at the expense of their blue collar, regular folk supporters. It would appear selling one’s soul for a big dollar while parking common sense is not a blueprint to long-term success. Maybe there is a glimmer of hope we might see some of the latter. There could be an announcement soon regarding the restriction of how many junior and truck circuit races Cup guys might be allowed to run. It is about damn time. It has been bad enough in the past, where elite drivers have been taking wins and attention away from the regulars racing off-Broadway. It is worse now that those wins and attention are coming in the midst of the Chase, which has been instituted for the first time in those divisions. A little common sense in dealing with the issue would be like a breath of fresh air. For some reason, I am not yet holding my breath waiting for it to actually happen.

I am looking forward to Sunday. There are few races I really get excited about. There are the two at Talladega, the pair at Daytona, the two at Bristol, the Southern 500, the Brickyard 400, the World 600, the season conclusion at Homestead, and the two road courses. Those are races that promise to provide either magnificent action or at least they continue building on the sport’s rich heritage. Talladega, for me at least, provides both.

Talladega can be a minefield. We watch to see who among our Hot 20 can navigate through its perils and emerge relatively unscathed on the other side.

4. KYLE BUSCH – 3072 PTS
Rarely a bride on the restrictor plate speedways, but usually in the wedding party.

7. MARTIN TRUEX JR. – 3058 PTS
A gent with a small bladder has to go pee, the same problem with his car could leave him dry.

10. DENNY HAMLIN – 3039 PTS
Poor ole Brad wiggled in front of him, and then he wasn’t there anymore.

11. BRAD KESELOWSKI – 3038 PTS
Just what in hell do they make the grass out of in Kansas City?

16. JAMIE MCMURRAY – 2088 PTS
Trails Larson in the battle for Ganassi bragging rights…which is all they have left.

17. KASEY KAHNE – 797 PTS
Figuring out how he will help Elliott this week. Watching Talladega Nights for ideas.

18. RYAN NEWMAN – 767 PTS
Figuring out how he will help Dillon this week. Watching Death Race for ideas.

20. RYAN BLANEY – 682 PTS
Ricky and Trevor are both within seven points, just in case you were interested.

Ron Thornton
A former radio and television broadcaster, newspaper columnist, Little League baseball coach, Ron Thornton has been following NASCAR on this site since 2004. While his focus may have changed over recent years, he continues to make periodic appearances only when he has something to say. That makes him a rather unique journalist.
Previous articleReed Readies for Sprint Cup Debut
Next articleNew Iconic “Vulcan” Trophy To Be Awarded To Winner of Talladega’s Hellmann’s 500