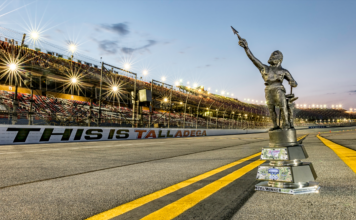 TALLADEGA, AL – It takes nerves of steel to circle Talladega Superspeedway at nearly 200 mph. The driver who does that the fastest on the final lap of Sunday’s Hellmann’s 500 NASCAR Sprint Cup Series race will be appropriately awarded with the new Vulcan Trophy, a miniature version of the famous cast-iron statue that overlooks the city in nearby Birmingham.

The Vulcan Trophy is a one-of-a-kind, handmade work of art created out of solid iron. It is nearly 3 feet tall and weighs nearly 80 pounds. It is the conception of Marshall Christie, the Director of Metal Arts at Sloss Furnaces in Birmingham, and Lead Sculptor/Artist in Residence Ajene Williams. The figure sits on an aluminum and stainless steel base that was created by Bruce Griffin (Griffin Laser) of Lincoln, as well as Steve Kirk (Advance Laser Machine) of Munford.

The design and resemblance of the Talladega Superspeedway (TSS) Vulcan Trophy is identical to the actual 56-foot colossal Vulcan statue that looms tall over Birmingham. The world’s largest iron-ore statue pays homage to the city’s roots in the iron and steel industry, with its depiction of the Roman god of fire and forge. The main attraction at Vulcan® Park and Museum, the statue stands on a 124-foot sandstone pedestal, bringing the height of the entire structure to 180 feet, and weighs more than 100,000 pounds. The statue was produced with local iron and was Birmingham’s entry at the 1904 World’s Fair in St. Louis.

Talladega Superspeedway’s history with Vulcan dates to 1969, the year the mammoth 2.66-mile venue opened. A month after the first NASCAR race was held at the track, the ARCA Racing series came to TSS for the Vulcan 500, which was won by Jim Vandiver. A year later, Ramo Stott was victorious in the second Vulcan 500 ARCA event at TSS.

“What these incredible metal artists have created is something that means so much to our local community, Birmingham and our state. I know the Vulcan Trophy will be a piece that the winning driver in Sunday’s Hellmann’s 500 will cherish and covet. It’s original and the rarest of rare. Our history with Vulcan goes back to the beginning here, and we are just so proud of this.”

Vulcan has overlooked Alabama’s largest city from atop Red Mountain since the 1930s. Birmingham, founded in 1871, is unique because it contains coal, iron ore and limestone, the raw materials for making iron and steel. Three items are unique to Vulcan, who made weapons and armor for all the gods. His hammer and anvil were used in his forge (shop where metal is heated and hammered into useful items), and the spear is a piece of his completed work that he held high and admired.

“Having our beloved Vulcan replicated as the grand prize trophy for the Hellmann’s 500 links two vital aspects of our cultural heritage: Alabama’s racing legacy and the iron and steel industry,” said Darlene Negrotto, President & CEO of Vulcan Park & Museum. “We are delighted that Vulcan will have such a place of honor with one of our state’s most prominent and exciting venues.”

Sloss Furnaces, with its web of pipes and tall smokestacks, serves as an interpretive museum of industry and hosts the nationally recognized Metal Arts program. It is a National Historic Landmark, operating as a pig iron-producing blast furnace from 1882 to 1971. After closing it became one of the first industrial sites (and the only blast furnace) in the U.S. to be preserved and restored for public use.

About Vulcan Park and Museum

Vulcan Park and Museum is a 501(c)3 organization. All proceeds from ticket purchases will be used to support Vulcan Park and Museum’s mission to preserve and promote Vulcan as the symbol for the Birmingham region, advance knowledge and understanding of Birmingham’s history and culture, and to encourage exploration of the region. For information on Vulcan Park & Museum, located at 1701 Valley View Drive in Birmingham, log onto: www.visitvulcan.com or call 205-933-1409.

Sloss Furnaces is a 32-acre blast furnace plant where iron was made from 1882 to 1971, when the plant was closed due to obsolescence. Reopened in 1983 as a museum and national historic landmark, the Sloss Furnaces Foundation, a 501©3 organization, sponsors an active arts program that focuses on cast and formed metal sculpture. This metal arts program is rooted in Birmingham’s historic ties to the iron and steel industry. For its first 100 years, Birmingham was a foundry town, the South’s foremost industrial center and the world’s largest producer of cast iron pipe. So no form of art is more suited for creation in Birmingham than cast iron art. And nowhere in Birmingham is it more appropriate than Sloss, where for 90 years men made iron.

Since initiating the metal arts program in 1985, Sloss has offered workshops, exhibitions, and conferences on all aspects of metal working – forging, fabricating and casting – but focuses primarily on the use of cast iron as a sculpture medium. Sloss hosted the First and Second International Conferences on Contemporary Cast Iron Art in 1988 and 1994, and has organized the biennial National Conference on Cast Iron Art since 1997. Monthly open studios give a regional audience of professional artists access to the foundry facilities needed to cast their own work, while regular sculpture workshops in casting, welding and forging are designed for the general public. Organizing and implementing program activities is a program director and two artist-in-residents who, in addition, create and exhibit their own work and produce commissions for local institutions and organizations.

NASCAR speeds back into action at Talladega Superspeedway Oct. 21-23 for double elimination Chase weekend. Sunday’s Hellmann’s 500 NASCAR Sprint Cup Series event is the Round of 12 elimination race in the Chase for the NASCAR Sprint Cup where the title contenders will be reduced from 12 to eight at the checkered flag. Saturdays’ fred’s 250 Powered by Coca-Cola is the third and final race in the Round of 8 for the NASCAR Camping World Truck Series Chase in which only six competitors will advance for the championship at the event’s conclusion.

NASCAR’s Most Competitive Track (record 88 lead changes in 188 laps), with the circuit’s steepest banking (33 degrees) and longest distance (2.66 miles), is the most fun and fan-friendly, offering up hundreds of acres of free camping, amazing kids’ ticket prices and special offers for military members and college students. Talladega Superspeedway is NASCAR’s “Party Capital” thanks to the track’s infamous infield, which features the traditional Saturday Night concert and the world-renowned Talladega Blvd, home of the Friday evening “Big One on the Blvd” party. The historic venue features the most comfortable seats in motorsports, large video viewing boards lining the frontstretch and endless activities for fans throughout its event weekends. Log on to www.talladegasuperspeedway.com or call 1-877-Go2-DEGA for more information.