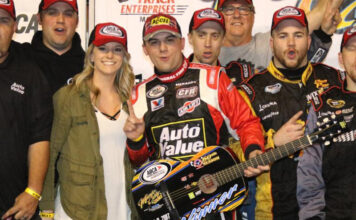 NASHVILLE (April 8, 2017) –– Kyle Weatherman had the best car all night long, almost…up until four fresher General Tires got in the way. Despite a dominating performance from Weatherman, in the end, Chad Finley stepped up to earn his career-first ARCA Racing Series presented by Menards victory Saturday night at Fairgrounds Speedway Nashville.

Finley, who got a lap down early on, wasn’t a factor most of the way, pitting out of sequence from the leaders for four General Tires on lap 156. The rest of the lead lap cars had already taken their final four tires just past the halfway point of the 200-lap race.

Then Finley just drove underneath Weatherman on a green-white-checker finish to win the 26th running of the Music City 200 presented by Azure Foundation.

“We weren’t our best today, but somehow we kept our heads in it, kept tuning on it and finally got the job done,” said Finley in Victory Lane. “We struggled all day. We finally got four fresh tires for the end and that made the difference.”

Finley drives for his family-owned team in the No. 51 Auto Value-Air Lift Company Chevrolet…his dad Jeff Finley the car owner and a former ARCA winner.

“This is a really big deal. We’ve been trying for so long. My dad puts his heart and soul into this. That’s all I can think about…what it means to him. That’s the best part.”

Finley was out of sequence all night, pitting four times while most of the front-runners pitted just twice. The DeWitt, Michigan driver pitted the first time for adjustments only, took two tires on the second stop and adjustments only on the third, before getting four tires on his final stop.

Weatherman, in Mason Mitchell’s No. 78 St. Charles Glass-Turn One Condos Chevrolet, dominated the night, leading 134 laps before giving it up in the end.

“I gave it everything I’ve got…it’s hard to beat four fresh General Tires,” said Weatherman. “It’s unfortunate how this unfolded but that’s okay. I can’t thank my guys enough…they were on it all day. Congratulations to Chad. We’ll take what we got and move onto Salem.”

Christian Eckes was a factor all night, finishing a career-best third in the New York Bus Sales Toyota, but had to fight from the back after a miscue on pit road cost his team an extra pit stop.

“It was really chaotic racing out there,” said Eckes. “We had a really good car in the beginning. We had a little problem on pit road but we bounced back. Thanks to my Venturini Motorsports team…they brought a really fast car. I’m excited to go to Salem after such a good showing here.”

“Overall, it was disappointing,” said Theriault. “We want to win and we were close tonight. We just didn’t have the grip on the bottom. Between adjustments and tires being so crucial my guys worked really hard. Tempers got a bit hot out there…we leaned on some guys and they leaned on us. All those cautions didn’t help.”

Indeed tempers flared out on the track as 11 cautions slowed the race for 95 laps. There were also a few minor skirmishes on pit road between crew members before the dust settled.

Weatherman put on a show all night, continually out-racing his immediate challengers over several double-file restarts throughout the race but couldn’t hold back Finley when it mattered most.

“We did okay for going a lap down,” said Mingus. “Any chance I get to run an ARCA race I’m going to take it. The guys at Win-Tron never stopped working on it. I’m proud of our effort tonight.”

The next event for the ARCA Racing Series is the Kentuckiana Ford Dealers 200 at Salem Speedway April 30.