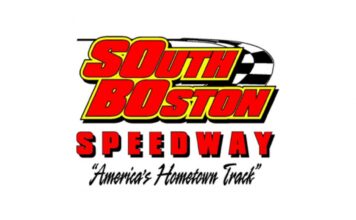 Both drivers were forced to restart the race at the rear of field, with McCarty holding the top spot for the restart. Two more caution flags were waved for mishaps before the race ended, with

McCarty holding off Danny Willis Jr. and Austin Thaxton, both of South Boston, Virginia, in a four-lap green-flag dash to the finish to earn his first win of the season.
Sellers rallied to finish fourth and Trevor Ward of Winston-Salem, North Carolina rounded out the top five finishers.

Sellers, driving a No. 00 Toyota in honor of late NASCAR Busch Series Champion Sam Ard who passed away a week earlier, won the wreck-filled nightcap, taking the lead on the opening lap and holding off Pulliam by a margin of .300-second.

The win was Sellers’ first victory at South Boston Speedway in over a year.

Trey Crews of Halifax, Virginia picked up his first win of the young season in the 50-lap Limited Sportsman Division race, edging Mike Jones of South Boston, Virginia by .757-second in a seven-lap dash to the finish that followed the last of the race’s seven caution periods.

Crews, a one-time winner at South Boston Speedway last season, muscled his way under pole winner and race leader Colin Garrett of South Boston, Virginia with 22 laps to go in the race and led the rest of the way.

Harrison Walker of Buffalo Junction, Virginia had not won a race in his three previous seasons of competing in the Budweiser Pure Stock Division at South Boston Speedway. That changed for the North Carolina State University student Saturday night.

Walker inherited the lead when race leader, defending division champion Johnny Layne of Nathalie, Virginia, was forced to the sidelines with a mechanical issue halfway through the race and sped to a 3.571-second win over Randy Hupp of Halifax, Virginia in the 30-lap Budweiser Pure Stock Division race.

Tyler Crute of Alton, Virginia picked up his second win in as many starts this season in the 15-lap Budweiser Hornets Division, and did it in the most spectacular of ways, leading only the final lap.

Crute rallied from his starting spot at the rear of the 12-car field to pressure race leader Drew Dawson of Nathalie, Virginia over the last half of the race. The pair started side-by-side on the race’s final restart with four laps to go. On the last lap, Crute got the nose of his car in front of Dawson’s car as they sped down the frontstretch for the final time. Contact was made between the two cars, and Crute spun, taking the checkered flag with his car spinning sideways just in front of Dawson’s car.

Next Race At South Boston Speedway

Admission is $10 for adults and $5 for youth ages 7-12. Kids ages six and under are admitted free with a paid adult.

For additional information about the NASCAR Late Model 100 racing program or any other events at South Boston Speedway, please visit the speedway’s website at www.southbostonspeedway.com or telephone the speedway at 434-572-4947 or 1-877-440-1540.