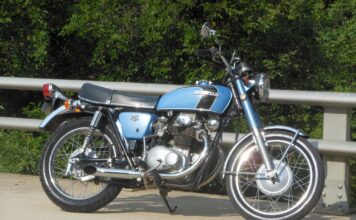 It’s difficult to imagine a more user-friendly classic motorbike than Honda’s legendary CB 350. Once the best selling motorcycle in the world, the CB 350 is still coveted as an entry-level collector’s bike today.

My CB 350 had fewer than 7,000 miles on the odometer when I purchased it. One year and 3,000 miles later, I sold it and moved on to another bike. I rode it several times per week, mostly on country roads and rural highways. I really wanted to experience a 1960s-70s era bike and the Honda offered it in spades.

The CB 350 was light and nimble. Although small compared to today’s monstrous, overpowered motorcycle engines, the 350 was considered a mid-sized bike for its time. It remains a great motorcycle for beginners. Its 36 horsepower rating is sufficient for comfortable cruising in the 50-60 mph range without intimidating a new rider.

I found a “New Old Stock” original Honda luggage rack and mounted it on my CB 350 so I could carry my gym bag or a backpack with greater ease and comfort. The rack was wide, carried everything I needed and the weight didn’t upset the balance of the bike.

Honda’s dual-carburetor 350cc twin engine seems pretty indestructible. Although my bike had fairly low mileage, I’ve spoken with many other CB owners whose bikes have gone well beyond 30,000 and sometimes even 40,000 miles. And the 350 powerplant created a truly magnificent sound when mated to Emgo’s Dunstall replica silencers. The tone was low, gentle and rumbling without the desperate “look at me” volume of some bikes.

Maintenance on the Honda was fairly straightforward. It used oil, but only in microscopic amounts. Not bad for a 45-year-old bike. It ran without complaint on 87 octane fuel so long as I faithfully used STA-BIL 360 Fuel Stabilizer in every tank. Failure to do so would have been disastrous because today’s ethanol-laced fuels induct moisture and attack every gasket and seal in the fuel system. With STA-BIL in the tank, the engine never missed a beat and suffered no damage from ethanol whatsoever.

My Honda CB 350 averaged 37 miles per gallon of fuel. That number remained largely unchanged regardless of what brand of fuel I used or whether I was riding primarily on the highway or city streets.

Fuel mileage was, however, sensitive to spark plug condition. The plugs fouled regularly and if ignored, would foul to the point of stalling the engine. Cleaning or replacing the spark plugs about every 600 miles seemed to do the trick. The only other way to seriously alter fuel mileage was through consistent hard acceleration, in which case fuel mileage would drop to about 30 mpg. The maintenance routine wasn’t bad at all and reminded me why these bikes were considered so reliable back in the 1970s.

Time machines aren’t cheap, but the Honda CB 350 is. For less than $4,000 you can still go back in time and experience the 1970s in all their glory. The slightly too-soft ride, mildly stiff throttle and minor vibration aren’t annoying or severe, but they’re just enough to constantly remind you that 1971 wasn’t such a bad place to be.