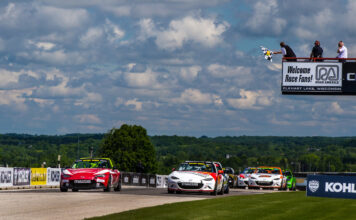 Elkhart Lake, Wisc. (23 June 2017) –  For the second time in as many races, it came down to a last lap drag race to the Road America finish line in another thrilling round of Battery Tender Global MX-5 Cup presented by BFGoodrich Tires action on Saturday.

The race was slowed for a one-lap yellow flag when young Joey Boden (No. 45 Fall-Line Motorsports) went  off-track at speed in the Kink and made contact with the inside wall. With a 10 lap run of green flag running to the checkers, it was another fiercely competitive round of Global MX-5 Cup action. The race featured 285 passes for position as the top nine all finished within 1.1251-seconds of the race winner.

Bryan Ortiz (No. 4 Copeland Motorsports/Bella Racing) led two laps and set the fastest race lap on his way to a fourth place finish to grow his advantage in the rookie standings as he targets the $50,000 scholarship on offer from Mazda. Fellow rookie Robert Stout (No. 28 Lucas Oil Products/Lucas Oil Racing TV/SC Fuels McCumbee McAleer Racing) finished in fifth place ahead of Mark Drennan (No. 5 Winding Road Racing / TFB Performance).

Joining the post-race podium ceremonies was rookie runner Brian Henderson (No. 7 Copeland Motorsports), who raced forward from 25th on the grid to finish 12th to secure the Battery Tender “Hard Charger” Award and the $1,000 price that goes to the driver as well as $1,000 to his crew chief.

After leading the opening five laps, Sparks fell back in the pack and had to fight his way back forward, not regaining the point until just a few feet ahead of the finish line as the 2016 Global MX-5 champion took his first win of the year.

“I fell back a little and I put my head down and really drove hard and I found myself back up at the front,” said Sparks. “Ortiz, Gallagher, and all those guys were driving so hard and there was battling for position and jockeying and moving around. I had a good run coming up out of the last corner and I managed to make my Mazda motor just power me up and just drove it home. It was super excited bringing it home for my Sick Sideways team today.”

Sparks had some special guests on hand for his victory as he played host to a group of kids on hand with Lemons of Love. For the second year in a row, Lemons of Love is raffling off a race-ready MX-5 Cup car to raise money to support their charity work with cancer patients. (http://lemonsoflove.org).

“I want to shout out to the Big Oak Ranch and the kids from Lemons of Love,” said Sparks. “They’re here and having a great time and got to see the Lemons of Love car we have from the raffle we had at the beginning of the year. The kids got to come out and sit in it and it’s great to have them here. I’m glad that I could show well for them and give them someone to cheer on and see do well today.”

Previous series champion Lamb was a factor all race long, leading in the middle laps of the event before coming up just shy of a victory on Saturday.

“That was a lot of fun,” said Lamb. “It’s my first podium of the season. We’re starting to get these cars figured out and starting to figure out who is going to work with us and who’s not. It’s been a lot of fun and a good learning experience this weekend, I’m looking forward to more!”

After winning the first race of the weekend Gallagher was looking to convert his fourth place starting position into another victory, but didn’t have the final run to the stripe that he had been hoping for.

“It was definitely more chaotic today, nobody wanted to work together like they did yesterday,” said Gallagher. “Everyone thought they had to be in second, but they didn’t realize they needed to be there until the last lap. Everybody was trying to get to second place from lap one, people were leaning on me and I just had to be careful. I got shoved around a little bit, but it’s a long season, and the championship points we got here this weekend are most important.”

The Battery Tender Global MX-5 Cup presented by BFGoodrich Tires will stage Rounds 7 & 8 of the 2017 season on the streets of Toronto July14-16 as part of the Verizon IndyCar Series race weekend.

About: The Battery Tender Global MX-5 Cup presented by BFGoodrich Tires is the signature spec series for the Mazda Road to 24 (#MRT24), the sports car counterpart to the Mazda Road to Indy (#MRTI). On both paths, Mazda-powered champions earn a Mazda scholarship to advance their career. The MX-5 Cup champion earns a $200,000 scholarship. Find out more at http://www.mx-5cup.com.