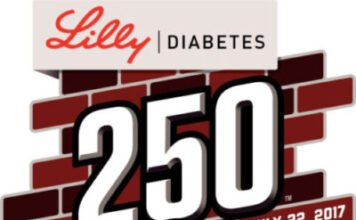 JOEY LOGANO – No. 22 Discount Tire Ford Mustang – DID YOU HAVE ANY CHANCE TO DO ANYTHING DIFFERENT? “I wasn’t even close. I was a distant third. I was kind of in the hunt there with the 9, but just didn’t have a fast enough car to hang with him. The handling kind of fell off there at the end as well. It’s interesting because you can trim it out and try to go fast and then handling comes into play, but it seemed like the 9 had a little bit of both. I really think the Gibbs cars were the two fastest cars and probably should have won the race today, so we executed and made the best out of our car.” WOULD THIS PACKAGE WILL BE USED FOR A CUP RACE IN THE FUTURE? “I don’t know.”

RYAN REED – No. 16 Lilly Diabetes Ford Mustang – “That’s not bad. A sixth-place finish at a track that hasn’t been good to us in the past. It’s really cool to get Lilly Diabetes a strong run at the Lilly Diabetes 250. It’s always nice when you can put on a good show for your sponsor. They’ve done so much and Indianapolis is so important to them and their heritage that it’s just a really cool day. I got to work with Cole a lot, pushing each other, and got some Ford united power there.” HOW WAS THIS PACKAGE COMPARED TO WHEN YOU TESTED? “It was a lot different than what we tested. I ran my own race, but I felt like we were passing a lot more. It felt like you could suck up, get runs, play a lot more strategy rather than just ride around single-file once the race got settled out. I don’t know what happened up front for the win, but it seemed like a decent race, at least better than the ones we’ve had.” WHAT WAS DIFFERENT ABOUT THE TEST FROM TODAY? “Temperature is going to be huge. We tested at the end of October, so right there you’ve got drastic temperature differences. And then I think tire wear. We were only doing 5-10 lap runs at the test, so when you have 30-40 laps on a fuel run you’re going to start finding a lot of different things.” SHOULD THEY KEEP THIS PACKAGE AT INDY FOR NEXT YEAR? “I don’t know. I think everybody needs to sit down and ultimately it’s up to the fans. If everyone is realistic with themselves, they all need to realize that we’re here because the fans let us be here due to their support. We need to see if they enjoyed it and if so, then we should probably consider going more in this direction.”

COLE CUSTER – No. 00 Haas Automation Ford Mustang – “It was a pretty fun race. A lot of the time we were kind of strung out there, but when you could get a push and everything it was awesome to get locked up going down the straightaways and everything. Our Haas Automation Mustang was pretty good today. I think we were just as good as the leaders, but I had some bad restarts there at the end. I wasn’t really proud of that, but I was happy with it. We got a solid run and we’ll go to Iowa and hopefully improve on our last run.” WHAT ABOUT THIS RACE PACKAGE? IS IT A GOOD DIRECTION TO GO? “It’s hard to tell because I didn’t race here last year. It wasn’t terrible. I think this would be a good speedway package, but it’s hard to tell because here at Indy I don’t really know. It was interesting.”

JOEY LOGANO PRESS CONFERENCE – WHAT DO YOU THINK ABOUT THIS NEW PACKAGE? “The package was really interesting. You had to race really smart. For us, we may not have had the fastest Discount Tire Ford, so I had good restart early in the race and was able to get some track position. Then our pit crew and everyone did a great job of maintaining that track position. You just had to be smart on restarts and knowing when to race guys and when to just keep momentum because if you started losing momentum you lost five or six spots. Being smart inside the car was key. I just wanted a faster car. That would have been key to do that to go up there and race with those guys. I thought I may have had something for them a little bit, but just lost the turn there at the end and started getting tight and lost touch of the two leaders. I wanted to stay up there to at least give Paul a good enough push to where he could maybe get up next to William there and do something, and then maybe I could sneak by both of them. That was my only hope at that point, but I lost touch with them.”