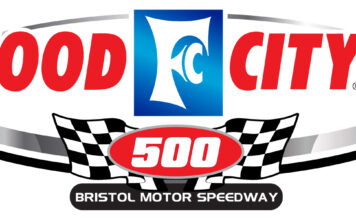 His teammate, David Ragan, driver of the No. 38 The Pete Store Ford Fusion, was sixth-fastest in today’s first practice and will start 23rd.

Both drivers spoke about how his weekend has started and their expectations for the race following today’s first practice session.

MICHAEL MCDOWELL, No. 34 Love’s Travel Stop Ford Fusion – THIS WEEKEND IS SHAPING UP TO BE A GOOD ONE. WHAT ARE YOUR THOUGHTS? “Yeah, it’s been a great weekend for all of the Front Row Motosports Fords and Roush Fenway Fords. Everybody knew coming in here that Bristol has been a really good track in the past for them. Obviously, this is my first year with the team, so I still had some unknowns until you go out there and do it and drive, but the cars have been really fast. They’ve had good speed in race trim and qualifying trim, so it’s been a really solid weekend.”

HOW IS IT TO HAVE A TEAMMATE NOW TO BOUNCE THINGS OFF? YOU SAID IT HELPED YOU YESTERDAY FOR QUALIFYING. “It’s a big help for me. For so many years in the Monster Energy Cup Series I’ve been with single-car teams. I’ve been on my own little island trying to figure it all out, so now to have data and information from cars that are coming out of your shop, your building, the same people touching them is a big difference. Even last year with the alliance that we were on, it wasn’t the same chassis, it wasn’t the same body, it wasn’t the same everything where it would correlate. Now it correlates and the same with Roush Fenway, we worked really hard in the off-season to get our cars as close as we can to their build specs, so that helps when we come to the race track and look at data and compare to Trevor and Ricky. All of those things are super-important. The alliance is obviously very helpful for us and I believe it’s helpful for Roush Fenway too, now that they only have two cars. It helps strengthen the overall organization, so it’s been a solid start.”

HOW DO WEEKEND’S LIKE THIS HELP IN TERMS OF OPTIMISM AND MOMENTUM FOR A TEAM LIKE YOURS THAT IS TRYING TO REACH THAT NEXT LEVEL? “I was thinking about that yesterday about what that means to an organization like ours, a smaller organization. It’s not just a confidence-builder, it gives you life inside the competitive side of things. It gives you hope and it gives you a sense of accomplishment and gratification that the work and that there will be moments where you can capitalize. For us, you build a season off of those moments. We know that not every week we’re gonna be in the third round of qualifying or we’re gonna score top 10s, but if we can do it four, five or six times as an organization that just gives you life and gives you the opportunity to build on stuff. We’ve had those moments. Daytona, we capitalized on that. That was great for our organization and there have been other highlights throughout the year of getting both cars through the second round.

MICHAEL MCDOWELL CONTINUED – “Those accomplishments might seem small, and they are when you’re comparing to Stewart-Haas and to Team Penske. Those aren’t their goals, and we get that, but at the same time if you don’t set realistic expectations, you’re miserable. When you’re miserable, the team is miserable. When the team is miserable, the owner is miserable and sponsors are miserable, so we have to set high goals, but they have to be tangible and it has to be something that we can all look back on this weekend and high-five that we made it to the third round. That’s not every organization’s high-five, but it is for us now and it’s good to celebrate those moments and to build off of them. You’re only as good as your last race, so you just have to capitalize when you can and I think we did a good job of that last week in Texas, we’re doing a good job of with it this week, but you’ve got 500 laps and you’ve got to make that count.”

WHAT DO YOU NEED TO DO FOR THOSE 500 LAPS TO BE SUCCESSFUL? THERE ARE A LOT OF VARIABLES TO DEAL WITH. “That’s a real challenge and it has been over the last few years here with the PJ1 going down because it’s constantly changing. They reapply it and then we’ve got rain coming in, so if that washes it off are they gonna reapply? If that’s broken up into two days, how does that work? So there are a lot of challenges and I think that, for me, I’m just looking for a certain feel out of my race car and I hope that when Sunday comes around and everything changes that feel is what I need to run the bottom or run the top or run the middle or wherever I need to be depending on the circumstances. I’ve found for myself, personally, that Saturdays are a really great day for me to tune myself out because you start chasing the track, you start chasing the feel, I start making adjustments in my style and then come Sunday I hit reset and you get in the groove and everything is fine. So I’m trying not to dial ourselves out today, knowing that we have a good car, knowing that we’ve raced this package and a similar package ’16 and ’17. There’s not a whole lot of need to switch things around, so you just have to guard against yourself. You can beat yourself very easy in this sport, especially when you’re talking about hundredths of seconds.”

RACERS ALWAYS WANT MORE, SO WILL THIS WEEKEND BE A SUCCESS REGARDLESS OF WHAT HAPPENS IN THE RACE? “Yes and no. I really separate Friday and Sunday. Friday is a race of its own for me and I think that’s just because I’ve had to make so many races on time and speed over my 10 years that I look at Friday as that’s my race. Now Friday is over, so I sort of move on from that. So, yes, there is definitely going to be momentum to build on no matter what happens Sunday. There’s no doubt about that. Our cars have speed. It’s hard to find speed, but when I talked about our goals and our expectations, one of our goals is to have both of our cars in the top 25 in owner’s points. For our team, the 34 team, we’ve already given up so many points. Las Vegas with debris coming through the radiator and getting a 37th-place finish when we were probably set up for 15th, and then Phoenix having a power-steering box fail. We were gonna get a 20th-place finish and end up with a 33rd, so we’ve already given up 30 points. So, no, Friday won’t matter on Sunday if we don’t get the finish because we can’t give up anymore points. We’ve got to come out of here with a top-15 and keep building on that because we know that those cars we’re racing against, it can go either way by two or three or four points, so you can’t give up anything.

MICHAEL MCDOWELL CONTINUED – “But it’s a long season and if you’re running good – if we had this kind of speed every weekend I’d tell you, ‘Sunday, no, don’t worry about it,’ because you know at Richmond you’re gonna qualify in the top 10 and race in the top 10. We’re not in a spot like that, so on those weekends where we can score big points we have to, and that’s really how you end up in the top 25 at the end of the year. I know that was a lot, but that’s sort of my thought process. Sunday is a race of its own.”

DAVID RAGAN, No. 38 The Pete Store Ford Fusion – YOUR WEEKEND IS OFF TO A GOOD START. “Our Front Row Motorsports Fords have a little bit of speed in them. I think the track is gonna change a tremendous amount between Friday, Saturday and Sunday, so we’ve got to be really methodical on how we adjust our race car and our balance. Not only is the grip level changing a lot, I think the groove is gonna change some. It’s good to know that our cars do have some speed and if we can get the balance close, so we just have to stay on top of the track conditions and make some good adjustments for Happy Hour and for the race on Sunday.”

HOW HAS IT BEEN HAVING MICHAEL AS A TEAMMATE? “Good teammates mean a lot and Michael is a really good teammate. He works really hard off the race track studying and really understanding what the cars and the track are going to do so he can make better educated decisions. That only pushes me to be better and I think on the race track he’s real aggressive. We have a little different driving style, so it is unique to look at his information and look at ours, and then along with the Roush Fenway team, we can critique ourselves. As long as we have honest conversations and we don’t have any egos in the room, which we don’t, I think it’s a good benefit to have a good teammate. Michael has brought a lot to the team. He’s made me work harder as a driver and by having a little different driving style and different backgrounds we’re able to pick up on things a little different.”

WHEN YOU COME TO BRISTOL IS THERE A DIFFERENT FEELING WITHIN THE TEAM, KNOWING THAT THIS IS AN OPPORTUNITY FOR A GOOD FINISH? “Yeah, I think the short tracks in general are a more level playing field than the mile-and-a-half tracks. We don’t have to worry quite as much about our aero platform or splitter height variation and a lot of things that are a real science to get the cars to go fast at a mile-and-a-half. Here, it’s kind of old-school. It’s more mechanical grip, get the car to where the driver can really hustle it and I think that plays into our hand, and a lot of the middle class teams I think it plays into their hand.”

DAVID RAGAN CONTINUED — THE TRACK MAY CHANGE, THERE’S WEATHER ON THE WAY. WHAT’S THE KEY FOR YOUR TEAM TO HAVE A GOOD RACE? “I think, for us, we’ve just got to be disciplined to not chase the artificial grip they’re laying down. I think they lay the VHT down and for short periods of time you can go really fast and it’s not feasible to withstand that for 500 laps. I think we’ve got to set ourselves up for the last 250 laps of the race and you’ve got to stay on the lead lap the first half of the race, but we can’t chase some of the gimmicks that go on with the race track and the surface and the grip level and tune our car into that, and then not be good when it counts. The track will kind of be like the old Bristol the second half of the race. I feel like we’ll all be around the top and you’ll be able to make some passes on the bottom, but I don’t think the race will be won on the bottom. We’ll keep that in mind and hopefully our predictions are somewhat accurate.”