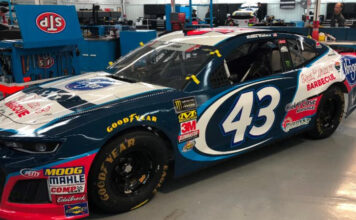 Red, White, and Barbeque Scheme to Ride with Bubba Wallace on Famed No. 43

The sides and hood of the No. 43 will have the red, white and barbeque messaging to remind fans that summer is here and it’s time to fire up the grill, while enjoying an ice cold Coca-Cola with family and friends. Of course, all your summer barbeque needs can be found at your local Kroger store, making this partnership the perfect way to celebrate the summer months ahead.

Wallace Jr. is a proud member of the Coca-Cola Racing Family and loves to barbeque with his family and friends. He’s looking forward to his first Coca-Cola 600 and this new partnership.

“‘I’ve been working with Coca-Cola for a long time and they have always been by my side,” said Wallace Jr. “This is a cool partnership with Kroger to really start summer barbeques. I love hanging with my family and friends, firing up the grill and just relaxing and having a good time.”

“I’m looking forward to my first Coca-Cola 600,” added Wallace Jr. “I’m not really worried about the length of the race. I’m sure I’ll be pretty fired up to go 600 miles. I think, for us, it’s just a matter of having a good handle on our car and the track. We’re working hard on our Camaro ZL1 package to get better. We’re making gains and hopefully we can show that on Sunday.”

“As families fire up the grill this Memorial Day weekend we brought together a great group of partners,” said John Mount, Vice President, Marketing Assets and Activations, Coca-Cola. “Kroger, Coca-Cola, Richard Petty Motorsports and Bubba Wallace are a perfect combination to enable all to celebrate the joys of summer grilling and barbecue. Most importantly, this group has a deep appreciation for all the men and women that serve in our military. We are all looking forward to Honoring Our Heroes from our US Armed Forces this Memorial Day at the Coca-Cola 600”

Memorial Day is also a time to remember the brave men and women who fought for our freedom. And, this weekend, Richard Petty Motorsports, its partner United States Air Force, and NASCAR will remember Technical Sergeant (TSgt) Scott Duffman who gave his life in the line of duty while stationed in Afghanistan. Staff Sergeant Duffman served as a Special Tactics Team Member, Pararescueman, and Special Tactics Instructor with the 24th Special Tactics Squadron at Pope Air Force Base, North Carolina, from January 2001 until he was killed in the crash of an MH-47 Chinook helicopter near Kabul, Afghanistan, on February 18, 2007. Scott Duffman was buried at Arlington National Cemetery.

“It’s so important that we don’t forget and honor our heroes of our country,” stated Wallace Jr. “Our relationship with the U.S. Air Force is special and the NASCAR Salutes program, supported by Coca-Cola, allows us to recognize our servicemen and women who have made the ultimate sacrifice so we can race and live in freedom.”

The Kroger Family of Stores is proud to honor the military this Memorial Day weekend with The Honoring Our Heroes campaign. Honoring Our Heroes is Kroger’s way of saying thank you to our active duty service members and our nation’s 23 million veterans. The Kroger Co. is committed to a nationwide initiative to help veterans and transitioning service members and military spouses find meaningful employment opportunities, and has hired more than 43,000 veterans since 2009.

The Kroger Family of Stores also supports the military through their partnership with the USO. To-date Kroger and their customers have raised approximately $21M in support of the USO and will be donating another $1 million of corporate funds this year to the USO as part of our annual celebration of our country’s service men and women. Through Kroger’s partnership with the USO and with support from various Kroger vendors, Kroger will be hosting members of the USO and their families for a Kroger Red, White, and Barbecue themed cookout at Charlotte Motor Speedway this weekend.

The Coca-Cola 600 at the Charlotte Motor Speedway is scheduled for this Sunday, May 27. The race will be televised live on FOX at 6:00 p.m. ET and broadcast on the Performance Racing Network and SIRIUS/XM NASCAR Channel 90.

About Richard Petty Motorsports
A performance and marketing driven company, Richard Petty Motorsports (RPM), co-owned by NASCAR Hall of Famer Richard Petty and successful business entrepreneur Andrew Murstein, is one of the most recognized brands in all of motorsports. RPM is the winningest team in NASCAR Cup history with 273 wins and has business partnerships with national and global leaders. Today the race operation fields the famed No. 43 in the Monster Energy NASCAR Cup Series with driver Darrell “Bubba” Wallace Jr. The team is headquartered in Welcome, N.C. and is supported by primary partners Click n’ Close, STP and the United States Air Force.

About The Coca-Cola Company
The Coca-Cola Company (NYSE: KO) is the world’s largest total beverage company, offering over 500 brands to people in more than 200 countries. Of our 21 billion-dollar brands, 19 are available in lower- and no-sugar options to help people everywhere more easily control added sugar. In addition to our namesake Coca-Cola drinks, some of our household names around the world include: AdeS soy-based beverages, Ayataka green tea, Dasani waters, Del Valle juices and nectars, Fanta, Georgia coffee, Gold Peak teas and coffees, Honest Tea, Minute Maid juices, Powerade sports drinks, Simply juices, smartwater, Sprite, vitaminwater, and Zico coconut water. At Coca-Cola, we’re serious about making positive contributions to our world. That starts with reducing sugar in our drinks and bringing new and different drinks to people everywhere. It also means continuously working to reduce our environmental impact, creating rewarding careers for our associates, and bringing economic opportunity wherever we operate. In fact, together with our bottling partners, we employ more than 700,000 people around the world. For more information, visit our digital magazine Coca-Cola Journey at www.coca-colacompany.com and follow The Coca-Cola Company on Twitter, Instagram, Facebook and LinkedIn.

The fairlife® brand is owned by fairlife, LLC, our joint venture with Select Milk Producers, Inc., and fairlife’s products are distributed by our Company and certain of our bottling partners.

About Kroger
At The Kroger Co. (NYSE: KR), we are dedicated to our Purpose: to Feed the Human Spirit™. We are nearly half a million associates who serve nine million customers daily through a seamless digital shopping experience and 2,800 retail food stores under a variety of banner names, serving America through food inspiration and uplift, and creating #ZeroHungerZeroWaste communities by 2025. To learn more about us, visit our newsroom and investor relations site.