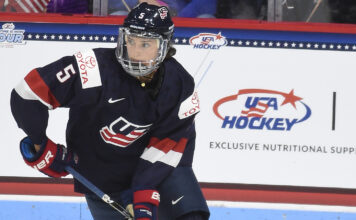 BROOKLYN, Mich. (May 24, 2018) – Megan Keller helped the 2018 U.S. Olympic Women’s Ice Hockey Team claim the gold medal at the PyeongChang Olympic Winter Games in February. On June 10, she will come home to Michigan to drive the pace car to start the FireKeepers Casino 400 at Michigan International Speedway.

“I am extremely excited to drive the pace car to start the race in June,” Keller said. “I was honored to be part of the women’s hockey team that was able to win the Olympic gold medal for our country. I cannot wait to get behind the wheel of the pace car and hear the roar of the engines as we come to the green flag.”

The Farmington, Michigan, native has been part of the U.S. Women’s National Team program since 2014. She has played in one Olympics, three International Ice Hockey Federation Women’s World Championships and three Four Nations Cups.

Keller played in all five games at the PyeongChang 2018 Olympic Winter Games, recording two assists. The U.S. Olympic Women’s Ice Hockey Team defeated Canada, 3-2, in a shootout to win the gold medal. It marked the first Olympic gold medal for the women’s hockey team since 1998.

“We are excited to have Megan drive the pace car for the FireKeepers Casino 400,” MIS President Rick Brenner said. “It was an honor to watch her live out her dream by winning the Olympic gold medal this year. We cannot wait to welcome her to Michigan International Speedway and recognize her achievement with our fans.”

Keller has played three seasons at Boston College. She was named first-team All-American as both a sophomore and junior. As a junior, she won the Cammi Granato Award as Hockey’s East’s top player after leading all NCAA defenseman with 39 points and 29 assists in 35 games.

Before Keller leads the field to the green flag, fans will want to be in their seats early. David “The Bullet” Smith, the World’s Most Accomplished human cannonball will fly high above the tri-oval. The fans will be laughing at the stand-up comedy act of Mike Green from the pre-race stage.

Tickets start at $35 for the FireKeepers Casino 400 on June 10 and the Consumers Energy 400 on Aug. 12. Fans can find the perfect campsite for their families and friends in any of the different campgrounds at the track starting at $160. Fans can purchase tickets and campsites at www.mispeedway.com or by calling 888-905-7223.

Sunday ticket holders can stick around on Saturday after the NASCAR XFINITY Series LTi Printing 250 for a free post-race concert featuring the bands FireHouse and 38 Special located behind Turn 3.

In addition, the track will have entertainment in all the campgrounds starting Wednesday of race week. Fans can enjoy fitness programs, church services, take trips into the community or watch a movie. The fan plaza will feature the ZOMONGO Adrenaline Zone, the Great Lakes Timber Show and free concerts.

Nestled in the lush Irish Hills of Southeastern Michigan, Michigan International Speedway is NASCAR’s fastest racetrack. It has been the love of NASCAR racing and the thrill of a great time for race fans and drivers alike for 50 years.

PHOTO: Megan Keller, a member of the U.S. Olympic Women’s Ice Hockey Team defeated Canada, 3-2, in a shootout to win the gold medal at the PyeongChang Olympic Winter Games will drive the pace car for the FireKeepers Casino 400 (credit: USA Hockey).