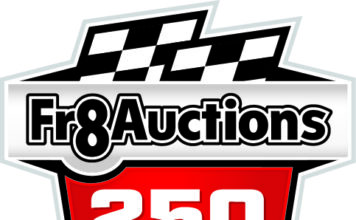 MATT CRAFTON, No. 88 Fisher Nuts/Menards F-150 – WHAT HAPPENED? “I saw some people getting turned up in front of me and I got hooked in the right-rear. The next thing I knew I was facing the fence and hit head-on.” YOUR STATUS IN THE NEXT ROUND IS STILL UNKNOWN. HOW FRUSTRATING IS IT TO BE OUT OF YOUR HANDS? “That’s Talladega for you. It’s all out of your hands from when we drop the green. I mean, when you’re racing and people are side-by-side bouncing off each other like that. We did everything we could do the first two segments and let her fly from there.”

WHAT HAPPENED? “Everybody was running over each other, pushing and banging and bumping throughout the corners and it’s just Talladega. That’s the nature of the beast here. Everybody pushes and pushes and pushes until finally the big one and then they’ll finally calm down for a little bit and then they’ll lose their minds again with about five to go.”

YOU SAID YOU WEREN’T GOING TO WORRY ABOUT COUNTING POINTS DURING THE RACE, BUT THIS IS WHAT YOU WERE HOPING WOULDN’T HAPPEN. “I knew it was going to happen, to be honest. It’s Talladega. I did what I could do the first two segments. I think we finished fourth and I don’t know the second or whatever it was in the second one, and we put ourselves in position and if we get eliminated because of other people’s mistakes and other people’s doings, we did everything we could do. We came here with a fast Ford F-150.”

FRUSTRATED? “Very frustrating, but it’s Talladega – what do you expect?”

GRANT ENFINGER, No. 98 Champion Power Equipment/Curb Record F-150 – HOW DO YOU DESCRIBE WHAT HAPPENED AT THE END? “I don’t know. It just wasn’t meant to be, I guess. I haven’t seen the replay. I don’t know if I waited too late or what. The 24 did a good job of pushing me on the start and then he got hung out by just not having any help behind him, and then the 51 was coming with a big head of steam, so I blocked him high. I thought I just stayed with him and I don’t know if he got me in the bumper, the quarter-panel or what, but just got us around. I don’t know. It is what it is.”

TALK ABOUT ADVANCING ON. “We didn’t do it today. We did it a few weeks ago at Las Vegas, so I’m definitely proud of that. I’m proud of the truck we had here today. Overall, our speedway trucks here at ThorSport Racing have gotten better. We had one of the better trucks here today. I don’t think we had the best one, but we definitely had a contending truck. It was really good pushing and fairly good leading, but it just wasn’t meant to be there at the end. I was making it as wide as I could. I don’t know if he got me in the quarter-panel or the bumper, if I just got behind. It’s a Talladega racing deal, I guess. I hate it for these guys. They deserved a checkered flag today.”

ARE YOU MAD? “I’m upset. I feel like we were in contention to win the race. We did everything we were supposed to do and, man, I’m upset about that, but I’m not mad at anybody. It’s Talladega racing. We probably should have wrecked about 15 times before that and even there we were out of contention in the race, but we’ve got a whole truck to bring back to ThorSport Racing and polish on it for the next one.”

DAVID SAID YOUR SITUATION AND TODD’S WERE SIMILAR IN THE SENSE THAT YOU HAVE TO BE THE LEADER BECAUSE YOU CAN CONTROL THE RACE. “You kind of control the race a little bit. I think David probably had one of the strongest trucks out here, so I think probably him and me were in the best position to win the race. That’s why I went to block him there and I blocked him fine and thought everything was all good and then as we both came back to the bottom I don’t know if he just got me wrong or if I waited late. I think it’s just a Talladega deal, but hate it for these guys. I am glad we didn’t tear anything up, glad we’re advancing. We did that at Las Vegas and not here.”

MYATT SNIDER, No. 13 RideTV Ford F-150 – “We had a great Ford F-150 all day. The RideTV/Louisiana Hot Sauce machine was really working today. It was a hell of a pusher. I’ve got to thank my team for giving me such a great truck. I had some good moves and had some bad moves, but overall my team kept me in position to be up front and possibly win the race, but fate just didn’t work out that way. I’m really proud of this team.” HOW DID YOU AVOID A LOT OF THE WRECKS THAT HAPPENED OUT THERE? “Hoping and praying (laughing). We made some good moves. Luckily, the wrecks went away from me.” HOW DID YOU KEEP THE TRUCK SO CLEAN? “I was able to make some good moves at the right times. Luckily, ThorSport Racing and Ford Performance gave me a great truck.”

MATT CRAFTON, No. 88 Fisher Nuts/Menards F-150 – POST-RACE INTERVIEW – WHAT ARE YOUR EMOTIONS KNOWING YOU’VE ADVANCED? “It’s been a rollercoaster. I thought we did everything we had to do. We finished fourth and second in those segments and then we had the big one and I’m like, ‘Oh, we’re probably out now.’ But then the 52 they said he was having problems and all of a sudden he starts going and he’s running up there, and then the 41 they’re saying is up there and I’m like, ‘Oh man, maybe we are completely out.’ All in all, now we get to go to the race tracks where the driver gets to mean a lot more than here at Talladega, where you get to run wide-open along the bottom. We have a torn up truck, but we had speed and got good segment points and we’ll go on to Martinsville. I love Martinsville. I’ve got a few different clocks from there and it’s one of my favorite places. Every one of the race tracks we’ve been to are really, really good race tracks for us.”

DO YOU FEEL LIKE YOU HAVE A NEW LEASE ON LIFE? “Absolutely. Like I said, I say it every week when we were coming up to this – if it’s meant to be, it’ll be. That’s the way I truly and firmly believe. If it’s meant to be, it’ll be. After we wrecked everybody was watching the points and I was watching, but it’s like, ‘Well, if we don’t make it, it wasn’t meant to be.’ All in all, I can’t thank these guys enough for the hard, hard work they did to work on this speedway truck for it to have the speed that it did.”

BEN RHODES, No. 41 Carolina Nut Company Ford F-150 – “It is what it is now. We’ll just go and finish out the season really strong and go win our Ford Championship Weekend down at Homestead even though we won’t be the champion.”

HOW MUCH DOES IT UPSET YOU THAT YOU WON’T GET REDEMPTION FROM LAST YEAR? “Yeah, that is the big disappointment for us and all these guys have worked so hard this year. We’ve put so much into this team and I know everybody says that, but we’ve had so many misfortunes come our way on the race track that have set us back this whole season. Had those not happened, we’d probably have enough Playoff bonus points by now to point our way in and we wouldn’t even be having this conversation, so it’s just been an unlucky season for us. We’re not letting that get us down. We can make excuses, but that’s not what we’re here to do. We’re here to race and get some wins. It was just a bad day, but I think overall at the end we showed that we were still strong even with a truck that looked like it belonged on the wrecker.”

TYPICAL TALLADEGA RACING TODAY? “Today is a heartbreaker. It’s disappointing for us because our 41 Ford F-150 was so strong throughout the race. We went from the front to the back and never really had a chance to prove how good it was and lead. Every time we were in contention to get up to the front we somehow fell to the back, got dumped out of line and then on top of that we got in that wreck as we were making our way back to the front. That’s what really put us down and knocked us out of the championship. Had that not happened and we didn’t have to come to pit road and lose a lap, then we would have been just fine and we wouldn’t have this conversation. But we had to come to pit road because the damage was so great and that’s what put us down, but we’ll move forward from here. We’re down, but we’re not out by any means. We’re gonna rebound and go to Texas, Phoenix, Martinsville and Homestead and have some good fun and finish up the season really strong.”