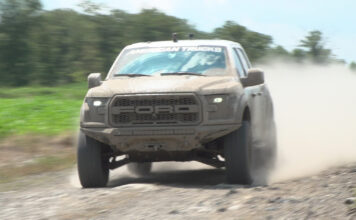 PAOLI, Pa. (August 13th, 2019) – In this episode of AmericanTrucks’ (AT) The Haul YouTube Series, host Justin Dugan visits a Raptor Takeover event at Rausch Creek Off-Road Park in Pine Grove, PA with his custom 2017 Raptor, and film crew in tow. Founded by Collins Harper, the Raptor Takeover was spawned in April of 2017 with a Facebook post that generated a flood of interest from fellow Raptor owners with off-roading ambitions.

“Truth be told I had been dying to really thrash on the truck after the build, which I hadn’t really done until the Raptor Takeover; and, I must say, I was impressed! The suspension was really solid, the Nitto Trail Grapplers never skipped a beat, despite some other trucks losing tires in the rocky terrain, and the ADD Front Mount and ID Motorsports tune kept the truck running its best all day.” –Justin Dugan

The Rausch Creek Raptor Takeover course for 2019 consists of a 4.7-mile course combining long straights with technical rock sections, water areas, and even some jumps! Sixty-plus Raptors were involved in the day’s event, allowing Justin to meet some new “mud buddies”, as he lovingly refers to them as. After a parade lap, Justin turns it up on the narrow course to let his AFE Sway-A-Way 3.0 in. Rear Bypass Shocks do their thing and make some noise.

About AmericanTrucks
AmericanTrucks is regarded as one of the best, most reliable online aftermarket retailers providing parts and accessories for F150, F250, Ranger, Silverado, Sierra, and RAM. Catering to the needs and demands of late-model truck owners and enthusiasts, AmericanTrucks provides the best parts with support from genuine truck experts. Located just outside of Philadelphia, AmericanTrucks is dedicated to offering the truck community with the highest quality of parts and customer service. Please visit https://www.americantrucks.com for more information.