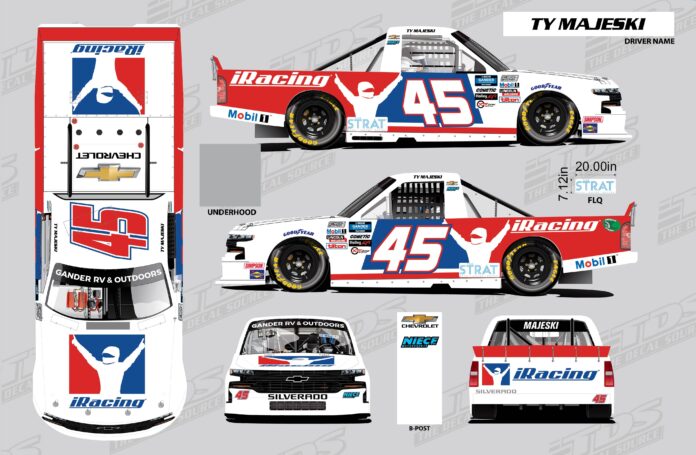 iRacing to Sponsor Ty Majeski and Niece Motorsports in 2020

“I can’t thank iRacing enough for their support as we move into the Truck Series this year,” said Majeski.  “They’ve been a long-time partner of mine, and I’m thrilled to continue that this season.  The entire organization has been working incredibly hard this offseason to make sure that we have trucks capable of taking our partners to Victory Lane.”

iRacing will make its debut with Majeski at Las Vegas Motor Speedway.

“We couldn’t help but notice Ty years ago, piling up wins and climbing to the highest oval skill rating on iRacing,” said Tony Gardner, iRacing president.  “Not long after that, we got involved supporting his late model program and watched him stack up big wins in the real world as well.  It has been exciting for iRacing to be involved in his career progression, and we’re proud to be part of this next big step with Niece Motorsports.”

Majeski’s No. 45 Chevrolet Silverado will also carry the iRacing colors at Richmond Raceway, Martinsville Speedway and in the season-finale at Phoenix Raceway.

“I know for all of the men and women that build our race trucks, the offseason flew by,” said team owner Al Niece.  “But it’s seemed like forever to me.  We had a great season last year, and I know how hard everyone has been working to prepare for this year.  We’ve been fortunate enough to add several great driving talents to our team, in addition to great partners like iRacing.  I’m honored that iRacing has decided to come on board and support Ty and Niece Motorsports.”

With over 110,000 active users, iRacing is the world’s premier motorsport racing simulation.  Since it was established in 2004, iRacing has developed dozens of formal partnerships in the motorsport industry to help create the most authentic racing simulation in the world.  iRacing promotes elite eSport world championships with eNASCAR, Porsche, and World of Outlaws, and allows users to race just about any discipline imaginable on more than 80 tracks.

Majeski is one of the world’s premier oval iRacers.  In 2,535 starts, Majeski has earned 1,892 wins, 2,225 top-five finishes, and 1,717 poles on iRacing.  As part of the partnership, iRacers will have the opportunity to race alongside Majeski throughout the season in a series of special events on the simulator that will be announced at a later date.

iRacing will also adorn Ross Chastain’s truck at Pocono Raceway, as Chastain looks to defend last year’s dominating performance; an event where he led 54 of 60 laps on the way to the victory.

“I’m excited to have iRacing on board at Pocono,” said Chastain.  “Last year’s race was about as perfect as it gets, and I’m confident we’ll contend to take iRacing to Victory Lane when we head back to Pocono this summer.”

Last season was a breakout year for Niece Motorsports.  In just its third full time season, Niece Motorsports and Ross Chastain earned one pole, three wins and 10 top-five finishes.  In addition, Chastain captured the most stage wins and led the most laps.  Chastain and the No. 45 team finished second in both the driver and owner point standings in 2019.

Niece Motorsports is owned by United States Marine Corps Veteran Al Niece.  In 2020, Niece Motorsports enters its fifth season in the NASCAR Gander RV & Outdoors Truck Series.  Niece also owns Niece Equipment, which has for over 40 years provided clients with reliable products at competitive prices.  Niece Equipment’s reputation is built on service, integrity and dependability.  The company provides water and fuel / lube trucks that are engineered with quality and durability in mind for the construction and mining industry.  Follow the team on Facebook and Instagram @NieceMotorsports as well as Twitter @NieceMotorsport.