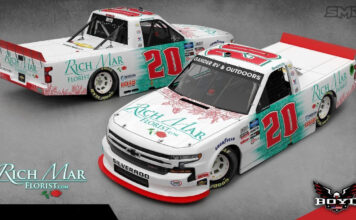 Concord, NC (March 25, 2020) – As the racing world waits patiently to return safely to the track, Spencer Boyd has teamed up with RichMar Florist for an amazing on and off track partnership. During these times when most of us could use a pick-me-up, Boyd will be sending virtual flowers upon request.

Spencer Boyd elaborated on the unique sponsorship, “There are medical workers that are on the front lines. Countless people in the travel and hospitality industry have been laid off or furloughed. Grocery store workers and suppliers have been working around the clock to keep up with demand. These people and their families need a lot right now so maybe at least I can provide a smile by sending someone some flowers.”

With a collection of photographs from RichMar’s extensive work over the years, Boyd will be taking shout out requests on social media and sending people pictures of tailored floral arrangements. RichMar Florist will also take center stage as a primary sponsor of the No. 20 Young’s Motorsports Chevrolet Silverado when the NASCAR Gander RV & Outdoors Truck Series is ready to return.

“We’ve known Spencer for a while now and love his interaction with the fans,” said Jonathan Morrissey Vice President of RichMar Florist. “We know that social media is flooded with mixed messages right now so spreading some cheer will do us all some good and Spencer is the right guy to help do that. We support NASCAR’s decision to postpone the season and look forward to seeing this beautiful paint scheme on the track when the time is right.”

Official Release
Previous articleA Flywheel? What Is A Flywheel? Learn What It Is And Why It Matters
Next articleHow Motorsports Betting is Rapidly Improving