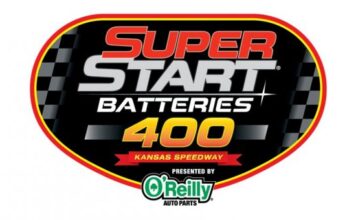 RACE #19: KANSAS
The annual spring NASCAR Cup Series (NCS) race at Kansas Speedway was re-scheduled due to the ongoing COVID-10 pandemic, and now gets underway on Thursday, July 23rd at 7:30 p.m. with the Super Start Batteries 400 presented by O’Reilly Auto Parts. The 400-mile race on the Kansas 1.5-mile tri-oval now marks the 19th race on the 2020 tour.

With the start of the NCS Playoffs just eight races away, Hendrick Motorsports teammates Elliott and Bowman are currently ranked fifth and 11th, respectively; and Richard Childress driver, Dillon, is 14th in the point standings.

BOWTIE BULLETS:
Chevrolet leads all manufacturers with 12 wins and 11 pole awards in 28 races.

Chase Elliott is the most recent winner at Kansas Speedway in 2018.

FLASHBACK:
The groundbreaking for Kansas Speedway was held 21 years ago on May 25, 1999 and the first NASCAR Cup Series race made its Kansas City debut on September 30, 2001. Team Chevy driver Jeff Gordon was the inaugural winner and followed that with a second victory in 2002 and a third in 2014, all in Chevrolet race cars.

In the Iowa INDYCAR 250S Doubleheader, Team Penske Chevrolet drivers Simon Pagenaud and Josef Newgarden swept the weekend with wins in Race 1 and Race 2, respectively. In both races two of the three podium positions were Chevy INDYCAR drivers. Rookie Oliver Askew finished third behind Pagenaud and Will Power finished behind Newgarden.

KANSAS STARTING LINEUP
The format for Thursday’s NCS event continues on as a one-day show with no practice and no qualifying. Owner points and a random draw have again set the starting lineup. Here are Team Chevy’s top-20 starters:

CHASE ELLIOTT, NO. 9 NAPA AUTO PARTS CAMARO ZL1 1LE – 5th IN STANDINGS
“To me, Kansas feels like such a small mile and half compared to some of the other ones we go to. I just feel like the corners are sharper than some other places and with it being progressively banked, the top side is going to continue to become dominant. I think in a way, it’s going to turn into Homestead in some situations and as time goes on. The way the corners are shaped, it’s kind of small and that top groove having more banking than the other ones as you move down the track is going to make it a top-dominant racetrack. Typically, those tracks put on good shows, so I expect it to age really well. I look forward to racing there this weekend. It is a fun track.”

ALEX BOWMAN, NO. 88 CHEVYGOODS.COM/ADAM’S POLISHES CAMARO ZL1 1LE – 11th IN STANDINGS
“I am definitely excited to get back to Kansas this week. That track was pretty good to us last year and I still think we should have gotten the win there in the spring. Kansas is pretty similar to Chicago, so I think it sort of fits my driving style. We have had some bad luck here lately and things just haven’t fallen into our hands. Hopefully we can turn that around on Thursday when we get to a track that I feel really does fit my driving style.”

AUSTIN DILLON, NO. 3 AMERICAN ETHANOL CAMARO ZL1 1LE – 14th IN STANDINGS
TALK ABOUT THE MOMENTUM YOU HAVE HEADING INTO KANSAS SPEEDWAY FOLLOWING A BIG WIN AT TEXAS MOTOR SPEEDWAY.
“Texas Motor Speedway is another mile‑and‑a‑half. Our cars have competed well on mile‑and‑a‑half’s. My teammate, Tyler Reddick, had a pretty good run at Kansas Speedway last year when he made his first NASCAR Cup Series start at the track. My current crew chief, Justin Alexander, was Tyler’s crew chief for that race so we have some good data from that run that we can utilize on Thursday night. I definitely feel like we have momentum, and we can take some chances and try some things now that maybe we wouldn’t have tried if we weren’t locked into the Playoffs.”

WHAT DOES IT TAKE TO WIN IN THE NASCAR CUP SERIES?
“You have to execute. We’re doing that much better this year than last year. I’ve studied other drivers, such as Brad Keselowski, who don’t always have the best car but make it happen when it counts. They are constantly battling for track position even if they don’t have the best car. We’re trying to do more of that and put ourselves in more situations to run up front so that we’re comfortable running up there and can make your own race at the end. You have to be aggressive in this sport to win races. I’ve noticed that a lot of the great guys are doing it. We were aggressive with our call at Texas Motor Speedway, maintained our position and won the race.”

WILLIAM BYRON, NO. 24 AXALTA CAMARO ZL1 1LE – 16th IN STANDINGS
BYRON ON KANSAS SPEEDWAY.
“I think Kansas is closer in relation to Charlotte with the amount of grooves it has and the ability you have to make the outside lane work. I think that outside lane is the preferred groove as the race goes along there. In terms of the track surface though, it’s similar to Texas with how smooth it is. It’s starting to get some grain to it and some character though the more we race there. It’s a great track though honestly. I think it’s one of the best mile-and-a-half tracks we have on the schedule to race at.”

BYRON ON MID-WEEK RACES.
“I’m definitely getting used to us having races coming rapidly around the corner and I really like it. It keeps my brain active and really myself in general. It doesn’t leave me too many days to sit and harp on the previous race or get lax waiting for the next one. I think it’s great to always have another race right around the corner so quickly like we’ve had.”

BYRON ON THE PLAYOFF BUBBLE:
“Right now, it’s all about points for us. We have to have a good week every week in terms of stage points and finishes. We need to work on getting back on the other side of the bubble and building back a buffer now. In my mind you want at least 50 points sitting between you and the cutoff to feel more secure and be able to be more aggressive. We were close to that point a couple weeks ago but the tire issue at Indianapolis and the wreck in Texas really hurt.”

CHAD KNAUS, CREW CHIEF, NO. 24 AXALTA CAMARO ZL1 1LE
KNAUS ON KEITH RODDEN FILLING IN.
“The No. 24 car has been strong even when the results haven’t shown it. Every week we lay out a pretty in-depth plan of what we’re going to do before we even get to the racetrack, so Thursday will be no different. We have a lot of depth to pull from in this situation at Hendrick Motorsports and I know Keith (Rodden) is more than capable of getting the job done. Keith’s been working with the team the last few races in preparation of this situation and I have all the faith that it will be a solid race for him and the No. 24 team.”

KEITH RODDEN, FILLING IN AS CREW CHIEF FOR THE NO. 24 AXALTA CAMARO ZL1 1LE
RODDEN ON SUBBING FOR CHAD KNAUS AT KANSAS:
“I’m super pumped to get to the track again and help out Chad, William, and the No. 24 team. Being present for the birth of your child is important, especially in the world we are in now, that’s a moment you don’t want to take for granted. Myself – and everyone at Hendrick Motorsports – support Chad and his family 100% in whatever they need. I’ve known Chad for years and our communication with each other is great. I’ve also been working with William and the No. 24 team the last couple weeks in anticipation of this moment. I’m looking forward to the opportunity to step in and represent Axalta and Hendrick Motorsports. I want to get the best possible result, but the ultimate goal is to show up to win and bring a trophy back for Chad and his family.”

TYLER REDDICK, NO. 8 I AM SECOND CAMARO ZL1 1LE – 17th IN STANDINGS
“I think you can take a little bit from Texas Motor Speedway to Kansas this weekend. Honestly, I haven’t thought much about Kansas Speedway yet, but I’m really excited for the race. We have a lot to be excited about at RCR heading into this weekend following that 1-2 finish. All the Chevrolet Camaro ZL1 1LEs are running really well this year, and we have a lot more speed on the intermediate tracks, so I have a lot of hope heading into this race. Kansas Speedway is a place that has been good for both myself and my crew chief, Randall Burnett. I got my first NASCAR Cup Series top-10 finish there last year during my second Cup Series start, and then we finished second in the Xfinity race there later that year. I’m really looking forward to how the race shakes out and how much the lanes will move around. I think a lot of drivers will try to figure out how to run up high on Thursday night, but I’ll be curious how that affects the tire fall-off and maintaining your speed during a run.”

RICKY STENHOUSE JR., NO. 47 KROGER CAMARO ZL1 1LE – 23rd IN STANDINGS
“We’re ready to head to Kansas Speedway this Thursday night. With the way the starting draw has gone, while 25th may not seem like a great starting spot, it’s the best we could have drawn for our bracket so I’m thankful for that. I feel like our cars this year are better than I’ve had on intermediate tracks in the past, and last year at the Kansas night race we were able to lead laps and almost get a top-10 finish. I think a track like Kansas is one of those tracks where we run all over the track and feel comfortable moving around early when we had practice, so being the first cars on track for the weekend doesn’t overly worry me. It’ll be one of those races where your car is going to change throughout the run while the track is changing, and then going from day to night. We just need to keep up with the changes and Brian (Pattie) is great at that, so I’m confident in having a good run tomorrow night in our Kroger Chevrolet.”

RYAN PREECE, NO. 37 BUSH’S BEANS CAMARO ZL1 1LE – 30th IN STANDINGS
“Kansas Speedway Thursday night is a new racetrack on our schedule, and a new way for us to turn our 2020 season around. We’re in a hole, but a few solid races can change that and with Kansas this week, New Hampshire Motor Speedway (one of my favorite tracks) next weekend, I think we have some good tracks ahead of us to put together some strong runs. After the race at Texas Motor Speedway, we’ve been looking at our notes and talking to Ricky (Stenhouse Jr.) and Brian (Pattie) to get a good setup in place to gain as many spots as we can before the competition caution at Kansas and then continue adjusting and moving forward. Our BUSH’S Beans copper Chevrolet looks awesome under the lights and I’m looking forward to having a good race Thursday night.”