Brandon Jones makes last-lap pass for the win at Kansas 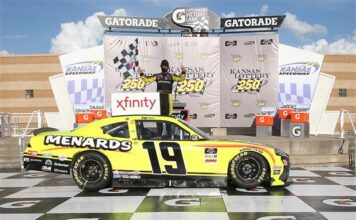 The NASCAR Xfinity Series was at Kansas Speedway today for the Kansas Lottery 250. Today’s race proved that it’s not over until the Checkered flag waives. The two dominant cars all day were those of Austin Cindric and Harrison Burton, however, neither of them were victorious. On what would be the last caution, Brandon Jones drove by them all in his No. 19 Joe Gibbs Racing Toyota and took the win. This is his third career win and his second consecutive win at Kansas Speedway.

“That’s what I love about these guys, they keep their head in the game and don’t get too excited,” Jones said. “We continued to make changes, my feedback I think was pretty good all day.” He added, “It’s good to get back to victory lane I’m looking forward to celebrating with these guys. This shows how we’ve been running good a lot.”

Cindric who dominated the race leading 132 laps of 147 finished in the second spot.

“I think to give credit when it’s due and H. Burton was the fastest guy today. He ran me down twice under the green flag, I hate for him to lose.” He continued, “It’s like that, but that’s racing and there’s going to be late cautions. Brandon did everything right. I got too caught up in clearing the 39.” He sighed and said, “I really wanted to get four in a row, overall it was a really solid day.”

Burton who came in third place after battling with Cindric all day long, said, “It’s frustrating, I feel like our team did everything right. I learned a lot from Denny Hamlin on what you try to do mentally and tried to use some of that on Cindric. I messed up on the last restart we were in a bad situation behind the 39.” He added, “I need to do better to take advantage of the situation and still get a win. I’m really proud of our speed, just wasn’t enough.”

Stage 1 only had one caution and that was the competition caution at Lap 20. There was some great racing between Cindric and Burton but it was Cindric who would win the stage.

Stage 2 went flag to flag without any cautions. Once again it was Cindric and Burton in a battle for first. Once again Cindric won the stage.

Stage 3 seemed like a repeat of stages 1 & 2 but down to the wire, the caution flag flew putting the race into overtime. When the race restarted another minor caution occurred and got everyone lined up but Sieg who stayed out on old tires. They were four and five wide trying to get to the front and seemingly out of nowhere came Jones to take the win.

Cindric leads the Xfinity Series Standings with 722 points. Chase Briscoe is in second with 718 points, Noah Gragson is in third with 666 points, Chastain is in fourth with 662, and Justin Haley rounds out the top five with 592 points.

The Xfinity Series heads next to Road America on August 8.

Michelle Lippold
I've grown up watching racing of some sort from midgets to Stock Cars since I was a child. I run the FB page Everything NASCAR but really want to explore my love of writing and racing together. I love both things so I decided to try combining them.
Previous articleCrafton Fends off Eckes for Kansas Truck Victory
Next articleFord Performance NASCAR: Cindric’s Bid For Fourth Straight Win Comes Up Just Short

Sean Creech Motorsport to carry US and Canadian colors at CTMP