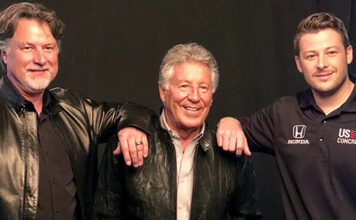 INDIANAPOLIS, Friday, Aug. 21, 2020 – For the first time in its storied history, the Indianapolis Motor Speedway (IMS) will host three generations of racing royalty on track together just before the Indianapolis 500 presented by Gainbridge on Sunday, Aug. 23. Legendary racer Mario Andretti will take his son Michael on a thrill ride in Honda’s Fastest Seat in Sports, before Mario’s grandson and Michael’s son, pole winner Marco Andretti, leads the NTT INDYCAR SERIES field to the green flag in the 104th Running of “The Greatest Spectacle in Racing.”

Though an Andretti has been competing at IMS since 1965, Sunday will mark the first time that all three generations of the accomplished racing family will run together on the iconic 2.5-mile oval. Mario Andretti, who ranks second on the all-time INDYCAR win list with 52 career victories, won the 1969 Indianapolis 500. Michael Andretti posted 42 wins in his distinguished career and led more laps (431) than any driver that has raced in the Indy 500 without producing a victory. Marco became the first Andretti in 33 years to win the Indianapolis 500 pole position when he proved to be the fastest driver in qualifying last weekend, earning the NTT P1 Award in his Andretti Herta Autosport w/ Marco & Curb-Agajanian Honda-powered entry.

Mario will be behind the wheel with Michael riding just behind his father when they turn high-speed laps in a custom-made, two-seater Indy car for Honda’s Fastest Seat in Sports on Sunday. They will ride in front of the 33-car field before Marco Andretti and his fellow drivers race into Turn 1 at the start of the Indianapolis 500 at 2:30 p.m. ET Sunday (live, NBC and Pennzoil INDYCAR Radio Network).

“I’m one of the few that can say I’ve been teammates with both my father and my son – and now to have the opportunity for all three of us to be on track together, on Race Day at IMS, is really special,” Michael Andretti said. “Dad and I are really excited to do this together, but we’re still fighting about who’s going to drive.”

Said IMS President J. Douglas Boles: “The Andretti family has such an incredible history and tradition at the Indianapolis 500. What a great way to celebrate the Andretti legacy with three generations of the family on track together for the first time at IMS, led by the Fastest Seat in Sports.”

Visit IMS.com for more information on the 104th Indianapolis 500 Presented by Gainbridge on Sunday, Aug. 23. Live coverage of the race will start at 1 p.m. (ET) on NBC and the Pennzoil INDYCAR Radio Network.