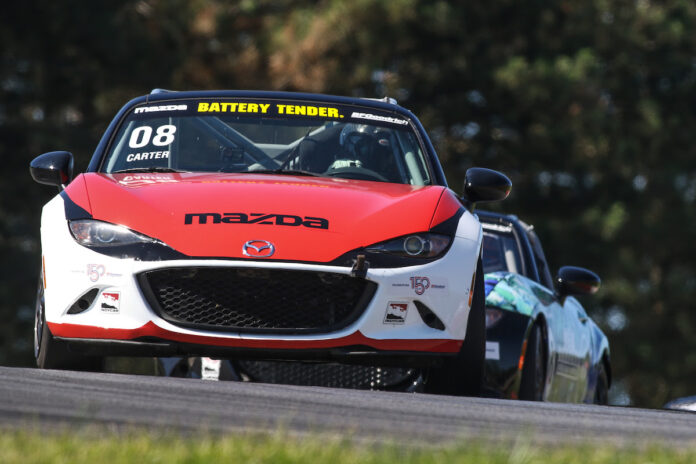 The second Global Mazda MX-5 Cup race of the day at Mid-Ohio was shaping up to be similar to the first; polesitter Wagner led Carter and Noaker in a three-car pack that was comfortably clear of the rest of the field. That all changed on the last lap of the 45-minute race, when Carter made his move for the win.

“I planned on making a move earlier in the race, but Gresham (Wagner) and Robert (Noaker) were there and if I made a move they would start racing,” Carter said. “We got a break away a couple of times and I decided to stay in line. It ended up working out! With three laps to go, I wanted to make my move for the lead. With two to go, I tried to make it, but wasn’t close enough. I was able to get it on the last lap even going three-wide.”

Noaker, who had been patiently lapping in third, knew Carter’s bold move was his best shot for a win as well and made it three-wide going into Turn Six.

“Fourth and back kept fighting so I decided to sit where I was and pull away,” said Noaker, who had a record-setting win at Mid-Ohio in 2018 and returned to victory circle at the track again in 2019. “I ended up with a 15-second gap by the end of the race. The last lap was interesting because I got knocked off the track going into Turn Six three-wide.”

Carter emerged the victor of the three-car battle, but only just: his margin of victory over Noaker was 0.6660-second. The distance was of no consequence to Carter, who was overjoyed to get his first ever MX-5 Cup win.

“It was just hard racing,” Carter smiled. “Hats off to my competitors. It feels great getting a win.”

Noaker maintains his Global Mazda MX-5 Cup Championship lead as the only driver to finish on the podium of every race thus far.

“I am glad we ended up in second,” Noaker said. “It would have been better to finish in front of Michael Carter since he and I are fighting for the championship, but I am happy with two podiums – it keeps us in the lead.”

After scoring his first win in the Round Five race earlier in the day, Wagner led 27 laps of the 28-lap race, but he didn’t lead the one that counted most. He knew the charge from Carter was coming, but there was nothing he could do to stop it.

“I could tell Michael (Carter) had a whole race behind him,” Wagner said. “He knew where I was stronger and where he was stronger. He had 27 laps to plan out his final move. He did the smart thing of riding behind until the final couple of laps so we could race each other clean.

“I went a tad deep on the brakes exiting the Keyhole and then Robert (Noaker) snuck up with us going three-wide. Luckily, we all got away with everyone keeping clean. I would have liked to win, but the way it unfolded was ok. We had a good, hard-fought race and a successful weekend.”

Up until the final lap, the best battle on track was from positions four through nine. There may not have been many “official” position changes at the scoring line, but the door-to-door racing and late-braking battles were too numerous to count.

JaredThomasIt was Robert Stout (No. 3 White Racing) who successfully defended fourth place to the checkered flag. He was followed by Jared Thomas (No. 96 Carter Racing Enterprises) who started ninth but made an impressive run to fifth.

Alex Bachoura (No. 33 Slipstream Performance) missed all of Friday’s sessions, including qualifying, due to a schedule conflict. As a result, he started from the back of the grid in both races. His first laps around the track this weekend were in Saturday morning’s race. By the second race, he had his bearings and ended up with the Hard Charger Award for picking up six positions to finish 11th.

Rounds Five and Six were only the first half of a Mid-Ohio double dip. The series will be right back at the 2.258-mile road course in two week’s time, September 24 – 26. They will race alongside the IMSA WeatherTech SportsCar Challenge and support series.