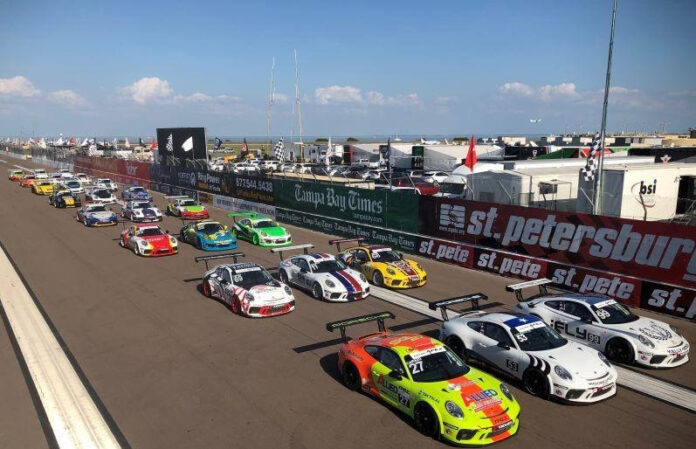 St. PETERSBURG, Florida (October 22, 2020) – Moorespeed and 18-year-old team driver Riley Dickinson return to where the 2020 IMSA Porsche GT3 Cup USA by Yokohama season nearly began more than seven months ago for a doubleheader do-over this weekend at the Grand Prix of St. Petersburg in the No. 53 Moorespeed Porsche 911 GT3 Cup.

Moorespeed and Dickinson participated in what was 2020’s originally scheduled season-opening race weekend in St. Petersburg only to see the event cancelled after Friday morning practice on March 13. Within days the motorsports world quickly united for a lengthy an industry-wide pause in response to the COVID-19 pandemic.

The IMSA Porsche GT3 Cup season finally began at Road America in early August, a few months after the St. Pete race was confirmed to return to the 2020 schedule this weekend. When Moorespeed, Dickinson and their IMSA Porsche GT3 Cup competitors take the green flag this Saturday, October 24 for the weekend’s first of two 45-minute sprint races, it will be a full 225 days after the first attempt at the St. Pete race was cancelled that fateful Friday the 13th.

“It seems like a lifetime ago,” Dickinson said. “It’s ridiculous how much the world has changed. We got a 30 minute look at the St. Pete track in March, and that’s really all I know. I got maybe 12 laps in that session, just the same as everyone else. We have a little bit of data to go off of when we go back. But as far as everyone is concerned, we’re on a clean slate.”

Practice and qualifying at St. Petersburg get underway on Friday, October 23, with Race 1 at 1:55 p.m. EDT Saturday. Race 2 will take the green flag on Sunday, October 25 at 12:40 p.m. EDT for the second and final 45-minute sprint of the weekend. Both races can be watched live at www.imsa.tv.

“One of our ingrained team mottos is ‘quitters never win and winners never quit,'” Moorespeed President David Moore said. “We are going to race, as always, with that in mind this weekend. This is the only street-course race of the year and the shortest track on which we compete at 1.8 miles. Anything can happen. We are going to race hard, hit all of our marks on and off the track and come Sunday we will see where it all ends up.”

Moorespeed and Dickinson have won three races as part of a run of 10 podium finishes in the first 12 rounds of this year’s championship. They rank second in the top-tier Platinum Cup point standings behind championship leader and eight-race winner Jeff Kingsley, but no one on the Moorespeed team is conceding anything with four races yet to be run this year.

“It’s going to be an interesting event,” Dickinson said. “It’s a wild card, anything can happen. At the end of the day, we definitely are not out of this championship yet. Who knows what can happen. It’s racing and it’s not over until… I’m going to keep on pushing as hard as I can until the checkered flag.”

Originally scheduled to be the opening pair of races last March in 2020’s 16-round IMSA Porsche GT3 Cup series, the St. Pete sprints are now races 13 and 14 on what is the penultimate doubleheader weekend of competition in the championship. The series stays in Florida for the season-ending same-day doubleheader next month at Sebring International Raceway.

Ironically, the Sebring races close the season on Friday, November 13, which joins March 13 – the day the initial St. Pete event was cancelled – as the only two Friday the 13ths on the 2020 calendar.

About Moorespeed: Based in Austin, Texas, Moorespeed is a full-service automotive company specializing in sales, service, repairs and restoration of luxury sports cars and competition on the track in numerous North American road racing series. Founded in 1991 in Austin by brothers David and Chris Moore, Moorespeed offers comprehensive, turn-key service in which people are just as important as parts and relationships are just as vital as results. David Moore and Winslow Mankin, GM – Director of Customer Racing, welcome and work with every customer as a member of the Moorespeed family, regardless if they are racing or enjoying their sports car on the open road. Moorespeed’s road racing programs are designed for all skill levels, and driver development, both on and off the track, is a Moorespeed specialty. Moorespeed is all about the passion for high-performance automobiles and the people who drive them. A commitment to personal service and performance permeates every corner of the company. Learn more at www.moorespeed.com, and contact us at (512) 474-7223. Look for us on Facebook at www.facebook.com/MoorespeedRaceEngineering and Twitter @MoorespeedTX.