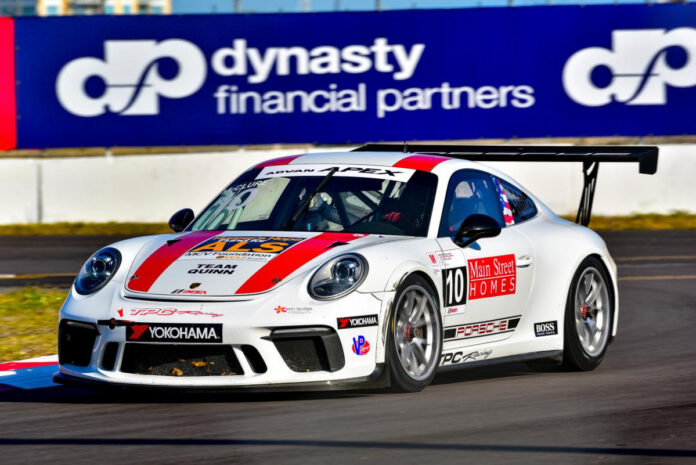 ST. PETERSBURG, Florida (October 22, 2020) – TPC Racing returns to the unofficial start of the IMSA Porsche GT3 Cup Challenge USA by Yokohama season this weekend as part of the Grand Prix of St. Petersburg with a three-car effort. Efrin Castro will continue his full-season run in the Gold Cup, while both Dan Hardee and Vernon McClure race in Platinum Cup Masters.

The doubleheader weekend on the 1.8-mile street circuit features a condensed schedule, with practice and qualifying on Friday, October 23 and a 45-minute race each day on Saturday, October 24 and Sunday, October 25. Saturday’s race begins at 1:55 p.m. ET, with the green flag on Sunday scheduled for 12:40 p.m. ET. Both races can be viewed live on IMSA.tv.

The race weekend is being held after a seven-month postponement, in front of limited fans. Prior to the race suspension in March, the Porsche GT3 Cup field actually held a 30-minute practice session on the temporary circuit before the uncertainty of the pandemic sent the field home prior to the weekend’s completion.

Castro and the No. 65 Fine Fares Supermarkets/TPC Racing Porsche 911 GT3 Cup enters the doubleheader weekend second in the Gold Cup standings. Castro has been on the podium in 11 of 12 events this season, including all three races less than a week ago at Michelin Raceway Road Atlanta.

Both McClure and Hardee are involved in select events in the 2020 season. McClure raced the No. 10 Main Street Homes/TPC Racing Porsche 911 GT3 Cup at Road America and VIRginia International Raceway (VIR) to open the season, while Hardee has made appearances at Road America and the championship’s first stop at Road Atlanta in the No. 69 Vbar Live/Student Wireless/Apple Rush/Hardee Family Foundation Porsche 911 GT3 Cup.

Like Castro, McClure and Hardee participated in the March practice session before the race weekend was suspended. That session remains the Porsche GT3 Cup Challenge drivers’ lone session on the street circuit.

Harris Levitas, Director of Race Operations: “It’s been a quick turnaround between Road Atlanta and St. Pete, with an unexpected trip back to TPC Racing in Maryland to make some repairs. The guys did a great job after a couple of long days, and we’re ready to go again. It seems like a lifetime ago since we were at St. Pete, but all of our guys have at least seen the track now. We’ll jump right in and get to work on a track that’s unique for this series and make the best of it.”

Efrin Castro, driver, No. 65 Porsche 911 GT3 (Gold Cup): “We had a solid weekend in Road Atlanta. We had the pace to sweep the weekend but could not put it all together. Right now, we’re focusing on St. Pete to be back on top.”

Dan Hardee, driver, No. 69 Porsche 911 GT3 (Platinum Cup Masters): “I’m really looking forward to getting back on track and running this Porsche with TPC Racing. This St. Pete event, along with Sebring, are the closest races of the year to my home. The street race, festival atmosphere is the perfect opportunity to show off Vbar Live, an interactive venue and broadcast facility that has hosted everything from comedians Alex Reymundo and Ron White to live bands. Even from home this year, you can watch the TPC Racing team on the track, and then catch a concert that night, all from your couch.”