CORVETTE RACING AT WEATHERTECH RACEWAY LAGUNA SECA: On the Doorstep of a Championship 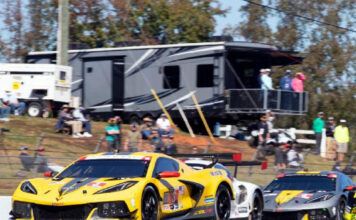 DETROIT (Oct. 27, 2020) – Corvette Racing continues to inch closer to writing a new chapter in its history as the program heads west to WeatherTech Raceway Laguna Seca for the next-to-last round of the IMSA WeatherTech SportsCar Championship.

The rescheduled Monterey Sports Car Championship at historic 2.238-mile, 11-turn WeatherTech Raceway Laguna Seca could very well serve as the coronation of Antonio Garcia and Jordan Taylor as GT Le Mans (GTLM) champions for 2020. The pairing have won five times this year in the No. 3 Mobil 1/SiriusXM Chevrolet Corvette C8.R and hold a 28-point lead over fellow Corvette Racing teammates Oliver Gavin and Tommy Milner in the No. 4 Mobil 1/SiriusXM Corvette.

If Garcia and Taylor end the weekend with at least a 35-point lead headed into the season-ending Mobil 1 Twelve Hours of Sebring, they will wrap up their first championship together. Garcia has won three GT titles in IMSA competition and Taylor is a two-time champion in the prototype ranks. As a whole, Corvette Racing seeks its 13th Drivers title and 14th Team crown.

In the GTLM Manufacturers standings, Chevrolet enjoys a 16-point advantage. It only needs to have one of the Corvettes start Sunday’s race in Monterey and another start at Sebring to win its 13th GT title.

All four Corvette Racing drivers will have a successful collective history to fall back on at the circuit. Each of the quartet has at least one victory – Gavin with four, Garcia with three, Taylor with two and Milner with one. In addition, Milner was the fastest GTLM driver in last year’s race; he and Gavin won at the track together in 2012 – one of Corvette Racing’s seven class victories at Monterey.

Saturday’s opening practice will mark the first time at WeatherTech Raceway Laguna Seca for the first-year Corvette C8.R. Technical in nature, the track surface typically is extremely tricky with a very limited amount of grip. It’s not too dissimilar from a track like Mid-Ohio, where Corvette Racing won in GTLM last month despite having not tested the C8.R at the circuit. Program engineers will consider the data and feedback gathered from that event when finalizing their baseline setups for Laguna Seca.

The mid-engine C8.R is based on the strong foundation of the 2020 Corvette Stingray with both developed simultaneously. There is a deeper level of technology transfer between the race car and production Corvette than ever before, which helps contribute to many of its advancements. As a result, the C8.R shares the highest percentage of parts between the production and race car than any previous generation.

Initial design and development on the Corvette C8.R – with Corvette Racing engineers working alongside Corvette production personnel – began more than five years ago with track testing starting within the last 18 months. Heavy emphasis on wind tunnel and simulation aided in the testing program.

The Monterey Sports Car Championship is scheduled for 4:05 p.m. ET on Sunday, Nov.1 with same-day television coverage on NBCSN beginning at 6:30 p.m. ET. TrackPass on NBC Sports Gold will offer live streaming of the full race starting at 4 p.m. ET. In addition, IMSA Radio will broadcast the race on IMSA.com, which also will host live timing and scoring. The race also will air on XM channel 202 and SiriusXM Online 972.

ANTONIO GARCIA, NO. 3 MOBIL 1/SiriusXM CHEVROLET CORVETTE C8.R: “It’s true that we are in a great spot in the championship heading to Laguna Seca, but our goal is to keep doing what we have been doing all year: put ourselves in position to win races if we can, and if not then maximize our points position. So we will go into the weekend expecting to contend and win this race. It’s another new track for the Corvette C8.R, but that has worked out well so far this year at Mid-Ohio and Charlotte. We have continued with our simulator work in preparing for this weekend to find the best possible setup for the first practice. I’m hoping we can continue our strong run and clinch the championship, but I also want to win another race this season.”

JORDAN TAYLOR, NO. 3 MOBIL 1/SiriusXM CHEVROLET CORVETTE C8.R: “It’s a big weekend for us in the championship, obviously. We haven’t tested at Laguna Seca. It’s a pretty hard track. But considering how well we ran at Mid-Ohio, which is another low-grip track, it shows pretty well for Laguna. We’ve done some simulator work already for this event – just some small developmental items. Mid-Ohio was very strong for us that it’s very promising as we head to Monterey. Leaving Mid-Ohio there were some things we wanted to try, so hopefully when we get there we will have some new run plans and can hit the ground running.”

OLIVER GAVIN, NO. 4 MOBIL 1/SiriusXM CHEVROLET CORVETTE C8.R: “We’ve found some great learnings and been very strong since coming back from lockdown. It shows with the amount of pole positions the car has had, the number of podiums and number of wins. We’ve managed to make the car very competitive and very strong in race conditions. Every time you go to Laguna Seca, it’s a challenge. You wonder how you are going to make the tire work and how we are going to get the most out of the car. But this Corvette is the best one we’ve produced, and it’s going to be the best car we’ve ever driven at Laguna. So we’ve already checked off a lot of those boxes. We have to see how the tires we have will work there with our partners at Michelin. I feel confident going there that we will be able to find a balance and a way to be fast.”

TOMMY MILNER, NO. 4 MOBIL 1/SiriusXM CHEVROLET CORVETTE C8.R: “Laguna Seca is pretty unique with the track surface. It’s super low-grip with all the sand that comes on the racetrack. It’s always a big challenge and trying to figure that out has never been easy. Now we go there with a new car where we haven’t tested, so that makes it even more of a challenge. But I’m excited to get the C8.R on the racetrack there. It’s a place where maybe we haven’t always been the best, so it will be fun to see what this new Corvette offers for us.”

It has been four years since Terry Dease has raced a full season at any speedway. That will change in 2021.
Read more
Indy

a leading provider of protective films and coatings today announced a multi-year sponsorship at Texas Motor Speedway. The second race of the 2021 NTT INDYCAR SERIES doubleheader, scheduled for Sunday, May 2, will be called the XPEL 375. The race will be televised live on NBCSN with coverage beginning at 4 p.m. CT.
Read more