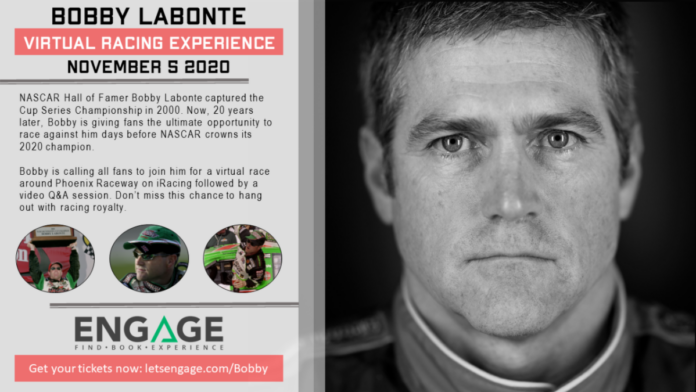 CHARLOTTE, N.C. – (October 28, 2020) – Now an experienced, competitive virtual racer, NASCAR Hall of Famer Bobby Labonte is preparing to take on some of his biggest fans on November 5, just 72 hours before NASCAR crowns its 2020 champion at Phoenix Raceway. It’s a unique opportunity for ultimate racing fans who’ve dreamed of competing against one of the best in the sport.

A limited number of tickets for the iRacing event are still available for purchase through Engage, which allows fans to not only race Labonte, but also to participate in a 30-minute virtual Q&A session.

The event is set for 8:30 pm EST on Thursday, November 5, with 30 minutes of practice laps around Phoenix Speedway’s one mile, low-banked tri-oval before they begin running qualifying laps. The fastest driver after two qualifying laps will win the pole and start the 40-lap race against a field that includes Labonte.

Once the checkered flag flies, fans will have the exclusive opportunity to hang out with Labonte over Discord, ask questions about his racing career or pick up some expert tips on virtual racing. Each guest will receive a personalized video from Labonte thanking them for participating in the iRacing experience.

“It’s been a lot of fun taking part in iRacing this season with so many great drivers, and I’m thrilled to be able to do this with race fans,” said Labonte. “I love iRacing and I am excited to finally get to connect with fans who love it, too. This experience will be extra special for everyone, including me, because we will have just raced against each other when the Q&A starts.”

As a virtual racer this season, Labonte participated in NASCAR Cup Series races broadcast on Fox Sports and also jumped into several other series including Fox’s Wednesday Night iRacing Series. As an experienced iRacer known to race anything, Labonte also made a guest iRacing appearance in the Ferrari Challenge Series and has been spotted in iRacing events around the virtual world – from Indycar to Sport Car to dirt racing.

“I got on board with virtual racing back in the 90’s, consulting on an old Windows video game called NASCAR Racing 2,” said Labonte. “It’s impressive to see how far the technology has come, and what a great platform iRacing has created for drivers and fans alike.”

This November marks 20 years since Labonte took home the NASCAR Cup Series trophy. More recently, he’s competed in the NASCAR Whelen Euro Series and was a first-timer in the Modified Division at NASCAR’s famed Bowman Gray Stadium. For 2021, Labonte is one of eight professional drivers currently slated to compete in the newly-formed Superstar Racing Experience, an IROC-style series for racing legends.

Tickets for his virtual racing event can be purchased for $82 each at letsengage.com/Bobby. Participants must have their own iRacing software and a suitable wifi connection for both the race and the Discord chat.

About Bobby Labonte
Bobby Labonte is not only a successful NASCAR driver and NASCAR Hall of Fame Class of 2020 inductee, he is also a successful television race analyst, businessman, and philanthropist. Labonte is in his sixth year as a race analyst and his third season on FS1’s NASCAR RACE HUB show. He currently owns Breaking Limits, a full-service marketing, public relations, sponsorship, and events agency, he’s a co-owner of Longhorn Chassis, a successful dirt late model and modified chassis and fabrication business and he leads the Bobby Labonte Foundation, which works in partnership with the local community to empower parents, families, and children to build a strong foundation for childrens’ futures.