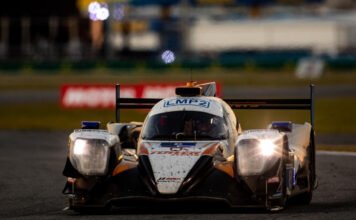 TORONTO, Ontario, (January 18, 2021) – After closing out the 2020 race season with a second place finish at the Twelve Hours of Sebring, Tower Motorsport is back for the IMSA WeatherTech SportsCar Challenge’s season opening event, the Rolex 24 at Daytona. The No. 8 Tower Motorsport Oreca LMP2 07 will be driven by John Farano, Gabriel Aubry, Timothé Buret, and Matthieu Vaxiviere.

Farano and Aubry will join forces as the full season drivers, with Buret and Vaxiviere stepping in to finish out the Rolex 24 At Daytona lineup. Farano, a seasoned veteran with two championships to his name (Continental Tire Sports Car Challenge GS Class in 2012 and European Le Mans Series P3 class in 2018) closed out the 2020 IMSA race season with a win at Petit Le Mans and as second place finish at the Twelve Hours of Sebring. He also raced in the LMP2 class in the 2019/2020 Asian Le Mans Series, scoring one win in two races.

“I am very happy to be back racing in the IMSA Wheatertech Sportcar Series and greatful to Peter Baron who will continue to support our 2021 program and do what he does best, calling strategy. We are all very much looking forward to welcoming back our crew from 2020 as well as new team members to our program including: Team Engineer Matthieu Leroy, Crew Chief Rick Capone, Lead Mechanic Erwan Barreau, and many more talented staff members that I can’t wait to meet.

“There is always so much excitement surrounding The 24 Hours of Daytona and I believe this years event, will bring more excitement than ever with more than 40 of the most competitive and talented LMP2 drivers coming from all over the world, all competing for the coveted Rolex watch. I could not be happier to be reunited with Gabriel Aubry and Matthieu Vaxiviere, whom I have had the great pleasure to work with in the past and to welcome Timothe Buret, who we have great confidence in, rounding out our talented 24 hour lineup.”

Gabriel Aubry started racing single seaters in 2015, and just three years later had advanced to compete in the World Endurance Championship with Jackie Chan DC Racing. He finished runner up in the 2018-2019 championship, with three wins and three additional podium finishes. In 2019, he finished second place in the legendary 24 Hours of Le Mans, followed by a second-place finish at the Rolex 24 At Daytona.

“I am happy and grateful to join John and the Tower Motorsport for the full 2021 IMSA season,” said Gabriel Aubry. “After two years of doing the Michelin Endurance Cup, it is a step up and the experience gained over the season will be massive. LMP2 field will be much better than what it used to be and we are set for a challenging year ahead.”

Timothé Buret first raced in North America in 2015, competing in the Road to Indy’s Pro Mazda series with Juncos Racing. The Frenchmen was a championship contender in his rookie season, earning one win and eight podiums in his North American debut. The following season he entered into the world of sports car racing, where he raced in the European Le Mans Series (ELMS) and the prestigious 24 Hours of Le Mans. Over the next four years, Buret has only expanded his resume, venturing into the GT World Challenge Europe and GT4 Europe.

“I am so happy to be joining John, Gab, and Matthieu for the Rolex 24 at Daytona,” said Buret. “I love US racing. To be back here will be something very special for me. I have so many good memories here back in 2015 when I was competing in the Pro Mazda series, winning my first major race at Indianapolis, fighting for the Road to Indy title and living in the US. It will be my first appearance at Daytona but our ambition is high as my motivation is.”

Like most race car drivers, Matthieu Vaxiviere began his motorsport career racing go karts and just six years later, he earned his first championship title in the French F4 Championship in 2011. He has since climbed up the motorsport ladder, racing in the Formula V8 3.5 series, Series, ELMS, GP3 Series, and the FIA World Endurance Championship, concluding the 24 Hours of Le Mans four times, resulting in two podium finishes. He made his IMSA debut in 2019, earning two podium finishes in the Konica Minolta Cadillac.

“I’m glad to race in LMP2 with one of the best teams in IMSA and to be able to fight for the victory,” said Vaxiviere. “Winning Daytona has been on my wish list for a long time. I’m looking forward to race again with John, who I had a great feeling in Silverstone when they call me for a one shot. To be alongside Gabi and Tim, two drivers that I know well, will be something good for the global atmosphere of the team.”