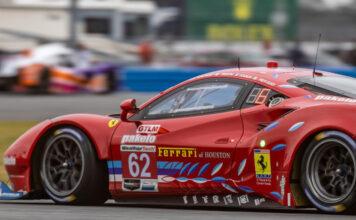 General: We qualified fourth (4th) in the qualifying race during the Roar on Sunday. The race forecast is mild, highs in the 70s. Most of the GTLMs raced here twice last year with the same spec cars and same spec tires. The tires being the same as last year shouldn’t put us at a large disadvantage. Each team had to pick their Daytona dry tire allotment in December. All manufacturers have hard, medium and soft tires to choose from, with Daytona being a predominately soft tire track. This shouldn’t be an issue for anyone as the tires are unchanged from 2020. GTLM cars are allowed 37 total dry tire sets for the event, which includes all the practice sessions and the race. Quantity shouldn’t be an issue, if you selected the right compounds.

The pit rules are the same this year with fuel and wheel changes at the same time and Prototypes (DPi, LMP2, LMP3) pitting first under the safety car and all GT’s pitting second. This should work out as the GTDs are required to take fuel slower. This should allow all the GTLMs to get out of the pits before the GTDs, as fueling determines the pit stop time, unless it’s a really small amount of fuel. There’s a fueling advantage of six (6) seconds on a full fill (from empty) for the GTLMs. Minimum full fill time (from empty) is regulated at 34 seconds for GTLM and 40 seconds for GTD. Safety car fuel stops rarely occur when you need a full fill from empty so the actual difference will be proportionately less. I think we’ll see some GTDs mixed with GTLMs on restarts. The GTDs are so fast on the banking and with their ABS it’s difficult for GTLMs to pass without risk. The LMP3s with the Pro drivers are able to do the same lap times as the GTLMs. But the LMP3s are regulated to 290kph (180 mph) on top speed, making the GTLMs faster on the banking. Restarts could be tricky. The addition of LMP3’s this year will likely increase the accidents and the amount of safety cars, as it did when we raced with LMPCs, particularly if the weather changes. It will also create restart issues in the race. The LMP2 and LMP3 are Pro-Am and they have significantly harder spec compound tires than GTLMs. These cars will struggle on restarts to get heat in their tires. The Am drivers will really struggle here. Expect GTLMs and LMP3 and some LMP2s to be fighting for track position.

The pit boxes are arranged this year so under a safety every GTLM and every Prototype have a clear in and out of their pit box; meaning pit lane boxes are ordered P-GT-P-GT-P, etc. So, under safety car stops the car in front and behind should not be in their pit box; some of the GTDs weren’t so fortunate last year.

Competitiveness: The IMSA WeatherTech specific balance of performance (BoP) GTLM rules evolved from last year’s Daytona, and this year’s Roar, without accounting for other 2020 races. IMSA uses a Daytona-specific BoP. The BoP is nearly unchanged from the 2021 Roar with only small changes and no changes to the Ferrari. Last year BMW had a significant advantage on the banking with power, but the Roar BoP addressed this. This year the Porsche ‘should’ dominate the pace. The new Corvette fared well and should run up front. But the Ferrari will be quicker than last year. The GTLM competitors “displayed” performance will vary. This is just the start to the long season. Risi is only signed up for this race; most of the others are signed up for the season, except BMW. Showing what you have at Daytona might result in a BoP reduction that will carry through for the entire season. Teams will be cautious of what they show and when and how much true pace they display.

Setup and Track: Clearing traffic at Daytona is significant in setup considerations. There is a tradeoff between lower downforce (lower drag) for banking speed and higher downforce for better braking and power down at corner exits. Trimming downforce too much can be slower overall on the banking from compromising the exits leading onto the banking; but there is a limit. There are also different minimum wing angle rules for each car specific to Daytona. Each car is built to a very car-specific homologation, very little can be changed by the team. The only way to really control banking speed (other than power) is by wing angle, to control drag. In addition to braking and power down at corner exits, the higher downforce also helps with the bus stop and tire longevity/degradation. But little passing is done in the infield so banking speed is important; if lap times are similar, choose better banking performance. These are all significant factors when racing for 24 hours, not just a lap time.

The Race: There were many safety car periods in the races where we had significant car count in Pro-Am prototype classes. Their larger grid this year will likely add more safety car periods with more Am (amateur) driver content in faster cars. This was the case when we had LMPC cars running in the series. Clearing GTD traffic this year will again be challenging. And LMP3s, with Pro drivers, have similar lap times to the GTLMs. The lap times are closer than ever between GTD and GTLM. GTDs have very good banking speed, some better than GTLMs. Combine that with their ABS (not allowed in GTLM) and it’s hard for GTLMs to pass GTDs cleanly. The IMSA pit stop rules are intended to remove the potential to gain time in the pits. Cars are BoP’d, in part, to ensure the same number of laps in a fuel stint and the same time to take a stint load of fuel in a pit stop. The only real way to gain in the pits is to save fuel on track (use less fuel per lap) and either make less pit stops or shorter stops as the pit stop time is determined by the time it takes to fuel the car. Strategy still comes into play, particularly in the closing stages of the race. One less stop in the last three (3) or four (4) hours, or stretching a couple stints to avoid a late fuel splash, could determine a win or podium.

Risi Competizione (Ferrari GTLM) has a better chance this year than the previous years. We’re cautiously optimistic this year. We’ve had the same core crew at Risi for several years; team familiarity reduces errors. We have a great driver lineup with four (4) very experienced drivers who have all raced at Daytona; they all know the F488 GTLM and have raced with Risi in the past. Let’s hope this familiarity plays to our advantage and we have a good result!

Television: In America, NBC carries live network coverage of the Rolex 24 At Daytona beginning at 3:40 PM on Saturday, Jan. 30, in America and is broadcast across several NBC channels, including NBC, NBCSN, the NBC Sports App and TrackPass on NBC Sports Gold.

Radio: IMSA Radio will have live coverage throughout the weekend on RadioLeMans.com and SiriusXM Radio. Also see imsa.com for live timing and scoring. Visit www.IMSA.com for more information.