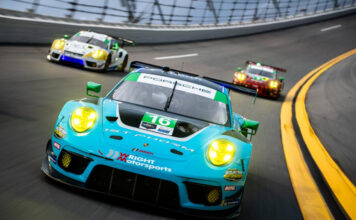 DAYTONA BEACH, Fla., (January 28, 2021) — Following an incident in Michelin Pilot Challenge practice on Wednesday afternoon, the decision has been made to retire the No. 16 Porsche 718 Cayman GT4 Clubsport for the remainder of the weekend. The Wright Motorsports car’s leading driver, Ryan Hardwick, will also withdraw from the Rolex 24 At Daytona, the season-opening round of the IMSA WeatherTech SportsCar Championship.

Hardwick’s condition is stable and the driver was kept overnight at a local hospital for observation, but due to a concussion he will not be able to drive the No. 16 Porsche 911 GT3 R in Saturday’s Rolex 24 At Daytona. The 1st Phorm entry will still compete in the event, with Trent Hindman joining the existing Wright Motorsports roster of Patrick Long, Jan Heylen, and Klaus Bachler.

“It’s unfortunate that I won’t be able to join the team for the big race,” said Hardwick. “I wish I was driving with them, but sadly that won’t be possible. When I first learned I wouldn’t be able to drive, Trent was immediately one of the first drivers I thought of to step in. I want the team to continue and our 1st Phorm car to be on track to compete in this event. I’ve followed Trent’s career for the last few years, and I think he’ll be a good fit. Trent is joining a really great team, and I wish them the best of luck this weekend. He’s in the best hands.”

Already at the circuit, Hindman was able to begin getting settled with his new team on Thursday morning, immediately beginning the team introductions, seat fittings, and team procedure reviews, in preparation for the first practice later in the morning. The 25-year-old American has several sports car racing championship titles, most recently winning the 2020 GT World Challenge America Powered by aws Silver Championship, as well as the 2019 IMSA WeatherTech SportsCar championship GTD class title.

“First and foremost, what’s most important is that Ryan is okay,” said Hindman. “Filling in for the Rolex 24 under these circumstances is never ideal, but I am grateful to John, Ryan, and the Wright Motorsports team for trusting me with this opportunity. The No. 16 Porsche looks to be a strong contender for victory come Sunday, and I certainly look forward to doing everything I can to make it happen.”

The first official practice begins on Thursday, January 28 at 11:05AM. The team will have a total of three practice sessions on Thursday, offering almost four hours of track time for the team to get settled into its new lineup.

The Rolex 24 At Daytona will begin at 3:40PM Eastern on Saturday, January 30th, airing live on NBC for the first hour, then move to NBC Sports. For just $3.00, fans can watch the race live with no interruptions on NBC Sports Gold’s TRACKPASS, which is available on smart TVs, tablets, computers, and cell phones. IMSA Radio is slated to provide comprehensive coverage of all on track WeatherTech sessions worldwide, and international audiences can find their Rolex listings via imsa.com/internationalcoverage.