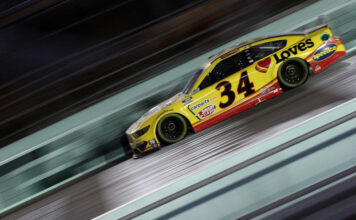 For the third consecutive weekend, Front Row Motorsports (FRM) headed south from its Mooresville, N.C. headquarters to the Sunshine State. Sunday, the NASCAR Cup Series competed at the Homestead-Miami Speedway. The NASCAR Camping World Truck Series was off.

The three Top-10 finishes is the best start in FRM history and in McDowell’s Cup career, but it’s the determination of the No. 34 Ford team that has been the most impressive.

Sunday, McDowell started the 267-lap race in sixth. He settled just outside the Top-10 during Stage One, as the team worked on the handling of his Love’s Travel Stops Ford Mustang. McDowell just needed minor adjustments and easily paced around the Top-15. He finished Stage One in 19th.

To start Stage Two, the team only made minor adjustments as McDowell took care of his equipment. Tire wear is always critical at the Homestead-Miami Speedway and McDowell was smart behind the wheel. He was rewarded with a 20th-place finish at the end of Stage Two, but in position to race hard in the final Stage.

McDowell picked up spots early in the final Stage and quickly moved to 11th before the caution waved. The Love’s Travel Stops Ford pit crew made another great pit stop and McDowell was inside the Top-10. McDowell raced there for the final 60 laps of the race. Even on old tires, McDowell made passes from ninth to finish sixth.

McDowell and the team are now fourth in the driver point standings.

MICHAEL MCDOWELL. NO. 34 LOVE’S TRAVEL STOPS FORD MUSTANG. FINISHED SIXTH
“I think tonight says a whole lot for this whole Front Row Motorsports organization. We’re just making huge improvements, and to come here to a very challenging mile-and-a-half and run in the Top-10, and not luck our way in, we raced there all night long, is super impressive. Thank you to everybody back at the shop. I’ve got to thank Love’s Travel Stops, Speedco, Fr8 Auctions, CarParts.com and Speedy Cash, and especially Ford and Roush Yates Engines. This whole team is super strong right now. Everything is clicking. The momentum is going and it’s pretty awesome right now. It’s exciting to be a part of this organization and to have this momentum. Like I said, this is a win for us to come to Homestead and run in the Top-10.”

Making his NASCAR Cup Series start at the Homestead-Miami Speedway, Alfredo ran a smart race Sunday and earned his second consecutive Top-25 finish. Alfredo was at his best in the final Stage of Sunday’s 400-miler and was closing in on the cars in front of him.

Alfredo had an impressive Stage One. He started the race from 27th, but had a fierce race with the likes of Corey LaJoie, Erik Jones, Ryan Preece and others throughout the first Stage. The team made changes to the car to help Alfredo, making his car loose to help his grip and balance. Alfredo was happy with the car, but the “dirty air” was hurting Alfredo from making big gains.

The second Stage, Alfredo had some minor left rear damage, but the crew was able to patch it. Alfredo knew the damage was hurting his handling, but he was at his best when the field raced single-file. Alfredo was always able to make passes and get close to the Top-25. The team was just never in the position to jump up to get more clean air.

The final stage, Alfredo raced hard and moved into 24th at the end of the race. It was another great learning experience for Alfredo who is now 29th in the standings, but only 10 points from 25th.

ANTHONY ALFREDO. NO. 38 DUDE WIPES FORD MUSTANG. FINISHED 24
“I learned a lot today in our Dude Wipes Ford Mustang. I felt like I got up to speed really quick, but the hardest part of race is the dirty air. We were really good when we had clean air. We had a lot of speed, just look at what Michael was doing up front, but I just need to learn a little more about the dirty air and how the car reacts. But, I think we saw some really good cars back in the pack, too. Everyone struggles with that. We just start in the back right now, but we’ll get that track position and we’re only going to get better.”

Official Release
Previous articleNewman Muscles to 7th-Place Run at Homestead
Next articleAshton Harrison to pilot the No. 25 Harrison Contracting Lamborghini Super Trofeo for the 2021 Season