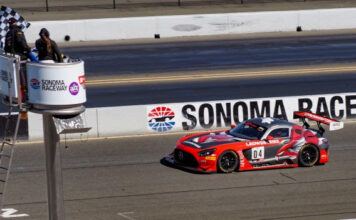 SONOMA, California – George Kurtz secured a comeback victory in the No. 04 DXDT Racing Mercedes-AMG GT3 in the inaugural race of the new SRO GT America presented by AWS series Saturday at Sonoma Raceway. The victory highlighted a strong showing of four overall and class podium finishes by Mercedes-AMG Motorsport Customer Racing teams in the opening day of the 2021 SRO America Championships season on the 2.358-mile Napa Valley road course.

Starting from the pole, Kurtz built a commanding lead on the GT America field from the drop of the green flag. He was in full control of the 40-minute sprint only to be called to the pits for a drive-through penalty, just before the race’s halfway mark after officials made the delayed call that Kurtz jumped the race start.

Kurtz returned to the race in fourth place but nearly a half a lap behind the leaders. He began a charge back to the front and reclaimed the lead with less than 10 minutes remaining and went on to secure the win by 5.90 seconds.

In Saturday’s season-opening Fanatec GT World Challenge presented by AWS 90-minute race, co-drivers David Askew and Ryan Dalziel shook off a pit-lane drive-through penalty of their own to secure a second-place Pro-Am class finish in the No. 63 DXDT Racing Mercedes-AMG GT3.

Starting driver Askew hit and unintentionally spun Kurtz on the first lap of the race, and the No. 63 was soon called to the pits to serve a penalty for incident responsibility.

Askew renewed his focus after serving the penalty and turned in a series of fastest race laps before handing the No. 63 off to Dalziel at the halfway point. Quick work by the DXDT crew put Dalziel back in the race third in Pro-Am.

A late restart gave Dalziel the opportunity he needed to improve another race position. Less than two laps after the green flag, Dalziel pulled off a key pass for second place, but time ran out before he could get close enough to the leader to challenge for the Pro-Am class victory.

In addition to the Pro-Am runner-up result, the No. 63 finished fourth overall. Kurtz and co-driver Colin Braun overcame a second contact incident late in the race to secure a fourth-place Pro-Am finish.

Co-drivers Kenny Murillo and Christian Szymczak battled for the overall and Silver-class victories from the drop of the green flag in the No. 72 Murillo Racing Mercedes-AMG GT4.

Rarely running out of the overall top three, Murillo, Szymczak and the No. 72 team led and finished second in the Silver class while also securing top-three overall honors in the 33-car field.

In the Pirelli GT4 America Am class, starting driver John Allen kept the No. 16 Capstone Motorsports Mercedes-AMG GT4 on the lead lap and in touch with the class front runners in a solid race-opening stint.

Allen’s co-driver Kris Wilson took over at the halfway point and charged from fourth to the podium result in the race’s final 15 minutes.

Sunday’s final day of competition begins with the weekend’s second GT America race at 8:45 a.m. PST. Pirelli GT4 America closes out its weekend with a 10:55 a.m. PST start for its second one-hour race before the Fanatec World Challenge finale brings the weekend to a close with a 1:15 p.m. PST scheduled start time.

All three Sunday races livestream for free on the SRO GT World YouTube channel. The weekend schedule of events, live timing and scoring, session reports and one-stop video viewing are available at gt-world-challenge-america.com.

George Kurtz, Driver – No. 04 DXDT Racing Mercedes-AMG GT3: “It was a great race. We had good pace all weekend and we had a big gap. I thought it was a good, clean start, but we got the drive-through penalty, which is like an eternity at Sonoma. It’s unfortunate, but I just put my head down and clicked off lap after lap. I needed the traffic to cooperate with the guys up front, and with a couple of laps left, we got a good pass into Turn Nine and that was it. We drove away from them. It felt good, but I didn’t really need to win it twice. Our Mercedes-AMG GT3 has been good. It’s great being with DXDT and all the cars this year.”

David Askew, Driver – No. 63 DXDT Racing Mercedes-AMG GT3: “It’s awesome for the team to get this podium. Second place is just fantastic. I tangled with my teammate early on, which is the cardinal sin of motorsports. I feel bad about that, but I just put my head back into it and concentrated on the driving after the drive-through penalty. That made the difference, so when I gave the car to Ryan, he could go out and do what he does so well. We’ve been working hard with the pit crews. Kudos to them, they’ve worked hard too, and they are getting the results. It’s all the attention to detail. It’s the little things that make the difference, and that’s what we were all about today.”

Ryan Dalziel, Driver – No. 63 DXDT Racing Mercedes-AMG GT3: “It was an unfortunate first lap. I haven’t really seen what happened. It’s racing, it’s really bad when it’s your teammate, but when David got back out there, he was lapping anywhere from a second to two seconds a lap faster than the other Pro-Am cars. It was probably the best drive he has had in a couple of years. It gave me a good starting point for my stint, I had a nice battle for second, which was pretty fun. Fantastic points for the No. 63 car, and this is a good track for the Mercedes-AMG GT3. It’s my third year with the team and for sure our best first weekend start so far. We’re looking to build on that tomorrow.”

Kenny Murillo, Driver – No. 72 Murillo Racing Mercedes-AMG GT4: “Coming into the event, our expectations were high because the last time we were here in 2019 we won and had two podiums. We wanted to repeat that. I’m really proud of the team. Murillo racing did an awesome job giving us a great Mercedes-AMG GT4. It was just on rails. I can’t thank them enough just to be here and be in the paddock, and to get a good result is the cherry on top. I’m really looking forward to tomorrow so we can hopefully improve, but the same result would be ok as well.”

Christian Szymczak, Driver – No. 72 Murillo Racing Mercedes-AMG GT4: “It’s awesome. I remembered how fun it was to drive with Kenny and this team. It was great that we and the Mercedes-AMG GT4 held up as well as we did to fight for second place overall. I’m really happy with that, and I feel like we did it as well as we could. It’s going to be different tomorrow because I’m starting. That’s obviously going to change it up a little bit. We’ve got to practice our pit in and pit out and make sure we get a good out lap and in lap. I think that’s going to be the key. We almost got second place in the pits today, so it’s possible to gain positions like that.”