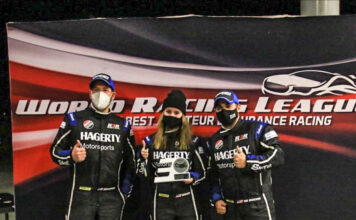 Leeds, Ala. (6 March 2021) – After two days of highs and lows, Round 3 Racing (R3R) kicked off the World Racing League (WRL) race weekend at Barber Motorsports Park by taking a GP2 class podium finish on Saturday.

The nine-hour race opened the double-header weekend that will feature 16 hours of endurance racing at the Alabama road course.

The No. 601 Team Cooper Tires Porsche Boxster of Mike Gilbert, Mo Dadkhah and Loni Unser led the trio of Porsche entries, finishing third in the GP2 class. The No. 604 Sentinel Porsche Boxster was close behind, finishing fifth with Christian Maloof, Michele Abbate and James Candelaria behind the wheel.

The podium close to the first day of racing capped a dramatic build up to the race event. In Friday’s opening practice session, the No. 604 Sentinel entry began to smoke. After a thorough inspection, the team decided that the issue required a new motor.

As the crew got to work, bad luck struck as the No. 601 Team Cooper Tires Porsche Boxster was plagued by the same issue. Utilizing all the backup resources at the track, the R3R team was forced to take the No. 601 to Atlanta for an overnight engine change.

With just one hour to spare, the team hustle was rewarded as the No. 601 made it back to the track to take the green flag with Mike Gilbert behind the wheel.

Gilbert pushed the Boxster to the top of the running order in the opening corners of the first lap. Keeping the car in the top two spots, Gilbert clocked a flying lap of 1:42.884-minutes on Lap 38 before handing the car over to Loni Unser on Lap 57.

Unser showed skill beyond her 23-years of age as she kept her eyes ahead during her three-and-a-half hour stint. A race marked by yellow flag conditions saw Unser navigate six of the 14 caution periods. Keeping the car clean was critical to keep the Porsche Boxster pit stop strategy intact, as Dadkhah swapped positions with Unser on Lap 147. Control of the No. 601 to the checkered flag was up to race starter Gilbert as he got back into the car in fourth. Careful maneuvering saw Gilbert break into the top three where he set the team’s fastest lap of the race on Lap 255 and secured the podium finish to close the Cinderella story day.

“This was an unbelievable day and it’s all about the crew,” said Gilbert. “Brad (McCall) and Buz (McCall) found and bought a motor last minute. AJ, Brian and Dusty drove three hours to Road Atlanta to put it in overnight, they got back here last minute to prep the car but got us on the grid with two minutes to spare. By turn five on the first lap, we were in first place. This is all about the hard work of the Round 3 Racing crew. There is absolutely nothing we could do without them. Racing doesn’t matter if you don’t have a car that’s on the track, those guys are amazing.”

The comeback story continued for the No. 604 Sentinel Porsche Boxster. A clean race and carefully executed pit stops kept the Porsche entry in contention heading into the final sprint of the race. Maloof, Abbate, and Candelaria raced to a fifth place finish to open the weekend.

“The Sentinel car was really a pleasure to drive,” said Maloof. “We had to do our practice during the race but the car was confidence-instilling which allowed me to push the car harder as the race went on. Thankfully, I was able to find about eight seconds between the first lap of the day and the end, even as the tires went off the car was just so stable and so consistent. The R3R crew put together a phenomenal car in such little time.”

The No. 702 Hagerty Porsche Cayman entry of Sarah Montgomery, Brad and Buz McCall had a strong start as Montgomery made quick progress through the GTO field to gain two positions in the first lap. Montgomery continued to fight with her competitors making her way up to sixth place before bringing the No. 702 Porsche to pitlane. After filling the car with fuel, a battery malfunction forced Montgomery to return to the track six laps down. Maximizing the remainder of her stint, Montgomery laid down quick laps before handing over the car to the experienced Buz McCall.
Just as McCall was settling into race pace, the No. 702 Hagerty machine made contact with the barrier at the exit of Turn 14. The incident caused terminal damage to the Porsche, ending it’s weekend early.

“I came up behind a competitor at the exit of Turn 14 and I was being patient so I could pass them down the front straight but all of a sudden the car stepped out from under me making a quick turn to the right where I was just a passenger,” said McCall. “I don’t think anything broke in the car, but I wasn’t on the brakes or shifting and I didn’t hit anything so it is kind of a mystery what caused it. I certainly didn’t have enough time to react but I did have enough time to close my eyes..I feel terrible for Sarah (Montgomery) and Brad (McCall). It is not a very good start to our season but this could be repaired, and we’ll get ready for the next race.”

The Porsche Boxsters will complete the weekend in the World Racing League Barber 7 Hour race Sunday, March 7th with the green flag at 8AM CT. The Round 3 Racing entries will feature live in-car streaming during the endurance race with the No. 601 Team Cooper Tires Porsche Boxster stream available at https://youtu.be/XJ7QPVXGYE8.